To be totally accurate this post should be called best and worst of what I read last week as I never even read about 12 books off my list last week. This is due to the same lament I have been singing for awhile but it is true. The volume of work at my paying job is at an all time high and sadly we are down one person. Onto the best and worst! 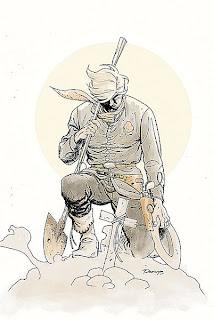 Jonah Hex #50 – Writer Justin Gray and Jimmy Palmiotti, Art Darwyn Cooke, Colors Dave Stewart. This book brings Jonah back into the stories that I like, one and done. At best Jonah can have a two issue story, but the previous six part “epic” felt too dragged out. This issue we start with Tallulah Black and Jonah doing some bounty hunting together. After a roll in the hay, Tallulah takes off. Jonah is given an assignment to capture or kill 50 men who had obviously done someone with money some wrong. (Side note: The story of the 50 feels like a plot thread to be explored at some later date.) Tallulah we find has gone off to quit the life and settle down. We find out later she is pregnant with Jonah’s child. The tale ends tragically, but it is done with a lot of emotion and a ton of action. The art is pure Darwyn Cooke and with his animation style sometimes this type of story is not a perfect fit, but Cooke makes it work so well that it is a thing of beauty and a joy to behold. 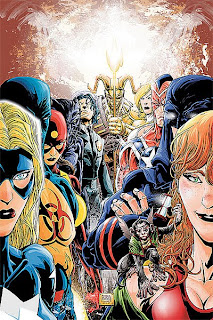 JSA All Stars #1 – Writer Matthew Sturges, Art Freddie Williams II, Colors Richard and Tanya Horie. I love the JSA and seeing a second ongoing series that splits the group into two parts is fine by me. Number one the group is so large they need to be split into two groups or at least have two ongoing series to allow each member a little more face time. Also with the writing team of Willingham and Sturges each taking a book I would hope the two titles will synch up pretty well. This issue we see that Magog is the team leader on the field and that most of the younger members of the JSA have split off with this group. It appears Power Girl is still the leader at their (new) headquarters, but Magog is the field general. The JSA in this book is heavily action driven and given how little many super heroes ever battle bad guys in a slug fest anymore I’m happy to see this. I liked all the little characterization bits and I thought the art was decent. Normally I love Freddie, but I think he needs a little more time on a group book as I do not believe he has ever done this type of comic before. Finally they are going to have to work really hard to make me care about Magog, but DC is pushing the crap out of this character by giving him an unlimited series and making him one of the team leaders of the JSA.

Absolution #4 (of 6) – Another strong issue in this series. I like how it appeared that John was going to give up to the police but instead escaped. The next two issues should be great.

Blackest Night The Flash #1 (of 3) – This was a good start that not only added some bits to the Blackest Night story it also added quite a bit to the whole Flash Rebirth story which has not completed yet.

Blackest Night Wonder Woman #1 (of 3) – The best Wonder Woman book I have read in a very long time. Diana was portrayed the way that feels right for her and she is powerful and decisive, every inch a hero.

Dark Avengers Annual #1 – Interesting story and the new Captain Marvel, but what a horrible costume. Also I thought he was from a different universe and this story sort of indicated that and then did not. What was a shocker was seeing Steve Rogers back as the end page for this story, with Bucky next to him as Cap. Shouldn’t this reveal be in Cap’s own mini-series.

Echo #17 – This issue we learn about the beta suit and just how powerful it is. It was actually a big favorite for a friend of mine. While I enjoyed it, I thought it was a slow issue of the book and a needed one so we understood more about what the suit was and what type of power the suit has.

Fall of the Hulks – Alpha – A waste of paper in many ways. I very tired of these retro-cons that Marvel is doing. It is not just retro-conning Jason Todd to have red hair; Marvel has these long untold secrets that have been going on forward. The Illuminati was one of them and now a group of bad guys has been planning stuff for years and years and they created the Red Hulk.

Scalped #33 – I love this series and this issue is no exception as we are building up to the conclusion of this arc in the next issue. All the players are coming together and it feels like the culmination of the entire series.

Seige The Cabal One Shot Writer Brian Bendis, Pencils Michael Lark, Inks Stefano Guardino, Colors Matt Hollingsworth. I choose this book because I keep hoping Marvel is going to end the Dark Reign and saw this book as the beginning of the end. I was expecting some great things from this book as I love Michael Lark’s art and it was great, also Bendis usually does well with the bad guy side of things. It was a waste of good art and yet another $4 waste of paper. I should know better. Bendis is a master at many things. Number one he has been fantastic at bringing the Marvel universe back to a more cohesive style. You can read almost every Marvel Universe book (outside of the X-Men) and know that they are occurring in the same time frame. This has not happened since the days when Stan was orchestrating and writing or scripting almost the entire line. This has it pluses and minuses, but overall I see Bendis as the architect behind it. Bendis also has some great overall ideas. Finally Bendis can drag out a story and a plot point like no one else and he can have some really clunker moments when it comes to characterization. See my full review here.

Thor #604 – Not a bad follow up to JMS, but it is fast becoming just another Marvel book at the same time.

Shorter post, but probably closer to what I would want on an ongoing basis, just hopefully with a tighter quality.