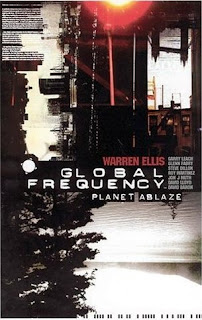 Last week, as I was driving home after Thanksgiving, I decided to stop in Maryland to visit Jim for awhile. A great time was had by all as we talked comics, sports, and more comics for hours on end. And, like every other time I visit Jim’s house, I perused his endless collection of books. The one that struck me was Global Frequency by Warren Ellis. It’s one of the few Ellis books I haven’t read and since he had both trades, I borrowed them.

The Frequency is a group of 1,001 people include ex-military, intelligence agents, black ops, scientists, various hackers, and everything inbetween. Each issue was self contained, and because there are so many operatives, Ellis created teams to address whatever the latest threat was. Some of the stories were over the top violent, and some were slightly more thoughtful explorations of supposed mystical events. Typically, each issue also had a tight timeline, less than an hour, in which the team had to accomplish the mission.

After reading all 12 issues, I was both thrilled and underwhelmed at the same time. And that’s a very odd feeling. Ellis stated that the series was supposed to read like a weekly installment of a television show. And, to that end, Ellis hits the mark perfectly. With the tight deadline and flexible cast, each issue whizzes on by. It doesn’t hurt that each story is full of typical Ellis science fiction, pseudo science elements.

But the action seemed to take precedence over any type of character development. This series is essentially a group of one shots with little or nothing to tie them together. This doesn’t mean the stories aren’t exciting or interesting. It just means that there isn’t any real reason for me to read the next story. In terms of characters, the only constant from issue to issue is the leader, and founder of the Frequency, Miranda Zero and her computer operator Aleph. But you never learn anything about them. The strength of a large flexible cast to handle any situation becomes a problem when no one appears twice.

In terms of writing, what can I say? Warren Ellis is Warren Ellis. He always has great ideas and characters. He manages to give each character a unique voice. Can I see some Jenny Sparks in Miranda Zero? I sure can, but Miranda Zero still stands as her own person with her own quippy line. The stories are all good with many being great.

The artists that worked on the series were Garry Leach, Glenn Fabry, Steve Dillon, Roy Martinez, Jon J. Muth, David Lloyd, Simon Bisley, Chris Sprouse, Lee Bermejo, Tomm Coker, Jason Pearson, and Gene Ha. I don’t need to tell everyone what an incredible collection of artists this is. And for the most part, they all turned in great work.

Overall, would I recommend reading the series? Yes. It was a great deal of fun. Would I read it in one sitting? No, I would not. I would read an issue then read something else and come back to this. In one giant sitting, the emptiness of ideas with no characters is far too evident.
Posted by Lee at Saturday, December 05, 2009