It's Better with Three 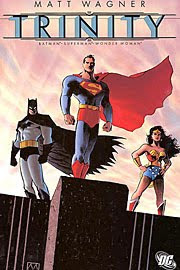 Wagner. A great name in music (if a might politically suspect). Just as great a name in comics. Matt Wagner has been consistently good for many years. My first experience was the great noir comic, Sandman Mystery Theatre, and he's not let me down over the years since then.
So, today is the DC work from 2003, Trinity. Wagner did the pencils and inks, as well as the writing, with colors by Dave Stewart. Of course, Wagner's pencils and inks alone would have been glorious, but the largely muted colors with the occasional bright splashes were exceptionally complementary.
The story is pure Wagner. Featuring Batman, Superman and Wonder Woman in a story that hasn't any allegiance to continuity, it evokes the mythos of the earliest years of the trio. In fact, though published in 2003, it's set in a cold war era of Soviet submarines and the wonderfully '30s architecture buildings at which Wagner so excells. The costumes each wears is also of that time, most noticeably in Wonder Woman's more modest boy shorts cut in the bottom portion of the costume.
As a history buff and a fan of good story telling, Trinity has a lot to offer.
The story itself uses villains from each hero's pantheon, most prominently Ra's al Ghul, from Batman. Ra's and his organization, The Purge, attempt to carry out yet another of his extreme environmental protection agenda plots to eliminate most of the world's population in order to save the planet, a masquerade for his own egomaniacal dictatorial tendencies. In service to that end he frees the icily entombed Bizzaro, from Superman, and befriends the ever confused clone. Amusingly, Bizzaro refers to Ra's as Racer Cool. Finally, employed by Ra's is a young escapee from Wonder Woman's Themiscyra, martially skilled like Wonder Woman and even using the name Diana, though in truth she's a 14 year old Artemis.
Of

course, only Ra's is actually a bad guy in the story. Stolen nukes, fanatical devotees, and a Lazarus pit's effects on the mystically birthed Wonder Woman are all elements. Personality conflicts between Batman and Wonder Woman, who have never met prior to this encounter, are more interesting than the more frequently portrayed conflicts between Batman and Superman. In this story Batman and Superman already know one another and have come to a mutual understanding. Wonder Woman's the new kid in the trio and has admiration for and attraction to Superman, but disdain for Batman's methods, his wearing a mask, and his loner tendency. Throw in Wonder Woman's background of having been raised in an all female environment, and you have an element of mistrust of men generally, emodied in Batman, who, in turn, mistrusts both Superman and Wonder Woman to some extent because of their extraordinary powers.
The Trinity theme is used in the formatting of the work, too, with three issues, each representing a focus on one of the trinity. The first issue begins in Metropolis, with its clean lines and broad shouldered protective son. Wonder Woman comes into this environment with much admiration for Superman, though uncertainty about her place in the wider world. Batman, as is his wont, appears only in the shadows, especially in this town. The second issue centers on Batman and Gotham City, a much darker city with heavier inks, with an element of Ra's' plan that involves nothing more than revenge on Batman and his city. The final issue, of course, features Wonder Woman and Themiscyra, battling against Ra's attack on the island, and a sort of salvagion of Artemis. It's by far the brightest in color of the three, as is appropriate for a tropical, verdant island.
Wagner works the classic and the modern together to create a fluid, engaging story that provides individual voice to all 6 of its main characters. There are no narrative boxes outside the voices of the characters, and there's no exposition that's not conversational and natural to the characters. What boxes that do appear represent the internal thoughts of the 6 primary characters. Expemplary of how well Wagner writes the voices for these characters, there's nothing in a box that says which character is thinking. It's all dependent on the reader being able to place the "voice" with the character. At no time is there a problem in quickly determining who's thinking.
If, for some strange reason, you haven't read this, now's a good time to treat yourself to an early Christmas gift. Or whatever winter solstice holiday you choose. Amazon has it for about $14.
Posted by Thomm at Sunday, December 13, 2009