Jim: As promised we have moved to IDW for awhile instead of Image. Image will be in the indies preview review. Now as this is for February, the solicitations of new stuff are very light, but we can pick some of their regular material to talk about.
: There isn’t much new stuff but since it’s IDW it’s all new to us. And based upon what I saw in the Image previews… this was an excellent choice. 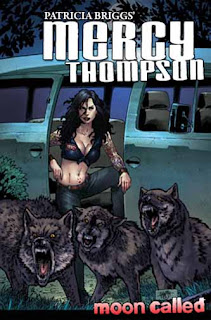 MERCY THOMPSON: MOON CALLED #1
Written by Patricia Biggs and Derek Ruiz, art and cover by Clint Hillinski.
Mercedes "Mercy" Thompson is a talented Volkswagen mechanic living in the Tri-Cities area of . She also happens to be a walker, a magical being with the power to shift into a coyote at will. Mercy's next-door neighbor is a werewolf. Her former boss is a gremlin. And she's fixing a bus for a vampire...
This is the world of Mercy Thompson, one that looks a lot like ours but is populated by those things that go bump in the night. And Mercy's connection to those things is about to get her into some serious hot water...
Moon Called faithfully adapts Patricia Briggs' first Mercy Thompson novel to comics. Prepare to see the fantastic characters and supernatural settings that have made her novels a hit with fans worldwide come to four-color life! 32 pages, $3.99.
Jim: This is part of what IDW does. They go out and try to pick up highly popular material from other genres and put it into a comic book format. For myself this is material that I would skip but many of these smaller publishers has gotten smart and are not depending on just direct market comic books stores for building an audience.
: I just hope this is better than the Anita Blake poop that Marvel is abusing the fans with. That stuff is so bad this can’t help but be better. 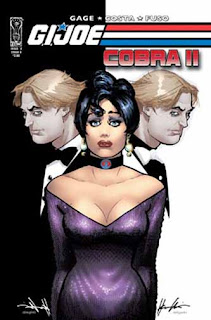 G.I. JOE COBRA II #2
Written by Costa and Christos N. Gage, art by Antonio Fuso, covers by Howard Chaykin and Fuso.
General Hawk's new operative has found Chuckles... who's in no mood to be rescued. And considering how his last handler ended up, maybe she should take his advice and leave him alone. Meanwhile, delve deeper into Cobra's twisted inner circles as Tomax and Xamot are called before the high command. 32 pages, $3.99.
Jim: A big IDW coup was getting the GI Joe license. They have gone full force with it and personally I’m not a Joe fan, but the first mini-series about Cobra was very good and I’m looking forward to more with the second mini.
: This is another tough choice for me. I want to like Joe but it’s so dense and mired in it’s own universe that I’m very, very hesitant to get into it. People who like it love it, but I’m still not sure. 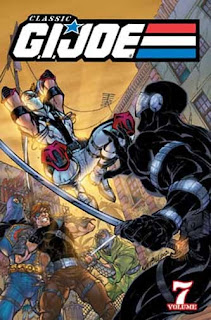 CLASSIC G.I. JOE VOLUME 7
Written by Larry Hama, art by Marshall Rogers, Danny Bulanadi, William Johnson, Ron Wagner, Russ Heath and Andy Mushynsky, cover by J. Scott Campbell.
More classic G.I. Joe action in this seventh collection of G.I. Joe: A Real American Hero! Including the issues "Beginnings and Endings," "Manuevering for Position," and "Into the Beach," read along with the action as the G.I. Joe team battles Cobra around the globe. 232 pages, $19.99.
Jim: I give IDW props for printing of all the old material in affordable collections also, both Dark Horse and IDW respect that the fans would like to have these collections and they appear to listen.
: I agree, but this is still junk. Memories of this Joe version are what keep me from getting into the new series. 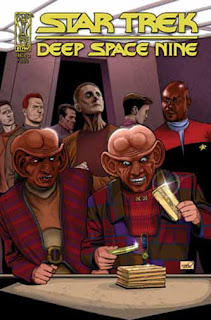 STAR TREK:DEEP SPACE NINE: FOOL'S GOLD #3
Written by Scott & David Tipton, art by Fabio Mantovani, covers by Sharp Brothers, David Messina.
As the temperature rises aboard Deep Space Nine, Captain Sisko, Kira and Odo come closer to getting to the bottom of the mystery. Can Sisko calm the volatile situation and restore order before another riot breaks out? And what does Garak have to do with all that has transpired? 32 pages, $3.99.
Jim: Another huge franchise license deal is Star Trek. Right now IDW maybe single handedly keeping the franchise out there ever month. They do all the various iterations of the series and jump on the movie from this year with both feet.
: This is all you because this is a franchise I really don’t care about. But, there’s a market because IDW is doing lots of it.
Jim: Actually this is not even me, I enjoyed the latest Star Trek movies, but the comics never got my attention. I think it is because the comics are never considered actual canon in the Star Trek Universe. 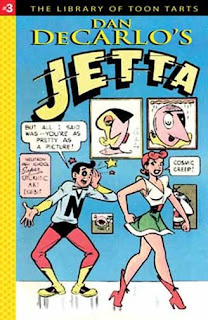 DAN DECARLO: JETTA
Written, art and cover by Dan DeCarlo.
Dan DeCarlo's futuristic curvy teenage girl Jetta zoomed through the future a full decade before Judy Jetson. In the 1950s, the fan favorite artist, beloved for his portrayals of Betty and Veronica, Josie and Sabrina The Teenage Witch, delineated the madcap adventures of Jetta, "Teen-Age Sweetheart of the 21st Century" with obvious delight. The comics, collected for the first time in their entirety and in living color will be accompanied by a revealing introduction by Craig Yoe. There will also be a bevy of rare unpublished original art and photographs. Plus, as a highly desirable bonus, Jetta pinups by top comic book artists and animators. 104 pages, $21.99.
Jim: This is another part of the IDW puzzle. They publish a lot of other books that are related to comic or comic strips. Dan Decarlo is the name when it comes to Archie comics and pulling this type of collection plays to a certain crowd and further enhances IDW’s reputation as a publisher, not just a comic book publisher.
: I’m pretty interested in this. I like all sorts of old comics but I really love the 50’s humor titles. I probably love it because there is so little of the material reprinted that I can’t be burnt out on it. The art by DeCarlo is just an added bonus. I’m not sure yet but if indies are light then I’ll get this.

This is a little bit of a shorter post as we were conflicted as to whether this one was too big or too small with breaking it into two parts. As we both feel there is so much out there to follow, shorter is better then too long, so we erred on making this two posts. Part 2 tomorrow.