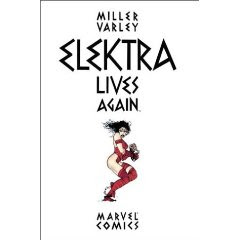 This is why continuity can be bad. If you're focussed on the cannon of Marvel, you'll have no interest in Elektra Lives Again from 1990, even though it's another Frank Miller, Lynn Varley work. Of course, the same outlook in the DCU would keep you from reading The Dark Knight Returns by the same duo (and Klaus Jansen), and that would be a more egregious failing in a person's reading lexicon.
Elektra Lives Again was one of Miller's more obscure writings. Not in terms of trying to find it, which is easy enough, but with regard to the method of story telling. A man best known for 300 and Sin City, to those unfamiliar with the comic book world of literature, readers of this Miller work would be very surprised by how many unstated elements there are to this story.
As with all Miller works, especially those on which he is also the artist, the art is not simply something to glance at as you read along. Miller's art is integral to the story and conveys such mood and ambiance that merely reading the text and glancing at the pictures will deprive a reader of too much of what's happening. These aren't simply pretty pictures. They are the story almost more than the words. I could page through Elektra Lives Again without reading a word and get the feeling of what Miller's conveying.
Which is a good thing because in this story, even reading the text I'm not sure what happened. Set two years after the climactic battle between Daredevil, Elektra and Bullseye, it's obvioulsy ignoring all the crap that came after with the character, even by 199o. All that's gone before is that Bullseye killed Elektra, the Hand tried to revive her and failed, and Daredevil tried to do the same, with Stick's disciple, Stone, taking Elektra's body. Daredevil never actually makes an appearance in this story, which is an interesting choice by Miller. Instead, it's all Matt Murdock.
Murdock is having nightmares of the return of Elektra, only for her to be killed again by all those she killed as an assassin. Something of a Marvel zombies before Kirkman. In any case, Murdock continues to have the nightmares, night after night. He tries to distract himself with a hook-up with one time girlfriend, Karen, but she's not in NYC (apparently working on porno films in LA). He ends up in the dubious position of sleeping with a client who's as lonely and depressed as he is. This is a marginally better course of action than my much despised female student sleeping with her professor, but at least this is portrayed as an empty relationship that lasts no more than the one encounter.
In the meantime, the Hand is plotting to defeat a revived Elektra by killing Bullseye (who's in prison) and reviving him as a super assassin, much as they had once planned with Elektra. I really like the entire sequence of the Hand gleaning its course of action through the sacrifice of one of its own and, even more so, the Hand assassin coming into the prison to kill Bullseye with a ball point pen to the back of the head. It was reminiscent of some of the Joker sequences in The Dark Knight Returns, with the utter and complete sociopathic nature of Bullseye and his arresting shock of blonde hair, never seen when he's in his costume.
The story ends with another climactic battle between Daredevil, Bullseye and Elektra, though in a sort of mirror image to the original story, none of them are in costume this time.
I'll say one more thing about the art before I get to my one problem with the story. It has an incredible lusciousness to it. Where Sin City employs absolutely stark black and white with occasional splashes of color for emphasis, or The Dark Knight Returns is frenetic and garish, Elektra Lives Again uses a mostly muted pallet with many really detailed and colorful works, especially in the stained glass church window details. Even in the dark recesses of a corrupted church, set as a place of the revival of Bullseye, there are eye catching colors. This, of course, is Varley's work, and it's exemplary of the profession.
So, my one criticism? I can't for the life of me figure out how Elektra was brought back to life, within the four corners of this story. If I check out the convoluted history of the character in other sources, it seems that she was revived in what Murdock had thought was a failed attempt, but then those sources don't account for her fate at the end of this story. Regardless, as an otherwise self contained story, I would like to know just how Elektra returned to life. Murdock dreaming about her seems woefully inadequate as an explanation. I'm close to calling this a great story for its seemly interplay between art and writing, but for this one element.
On the other hand, it's one of the few superhero stories that employs nudity without cutesie tricks to disguise the naughty bits. Even more rarely, it has both male and female full frontal nudity. Most of the naked are dead, revived attackers of Elektra, including Bullseye, but there is the uppper body female nudity of Murdock's one night stand partner, so its not all ghoulish nudity, though given the nature of the sexual encounter, it's nearly as desperate.
In the end, I'd highly rcommend purchasing this story. Its succinct and economical.
Posted by Thomm at Sunday, December 27, 2009