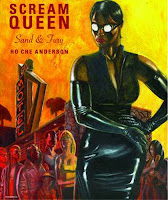 Fantagraphics Books
Scream Queen: Sand & Fury SC by (W/A) Ho Che Anderson
An original horror graphic novel from the creator of King, Scream Queen is a story of blood, of sex, of death - of sound and retribution. It opens as a girl by the side of a desert road accepts a ride from a stranger. How could she know that behind that wheel sits the angel of death? Of course, even the angel of death once had a life. During that life, death was a successful business woman, with a great career and an even greater future. It's true she could be a little cavalier with her innate gifts; she had, after all, broken the heart of everyone who had ever loved her. And then, one day - the monster entered the woman's life and changed everything forever. $16.99
Lee: I’m a huge fan of Anderson’s work. His art style is perfectly suited for this type of story. He’s also the accomplished author of King. With that kind of pedigree, it’s not like I’m taking all that much of a chance.
Jim: I have hit a limit on certain genres and unless I get a review or two from trusted sources telling me this is a great book I will pass.

Image Comics
Choker #1 by (W) Ben McCool (A) Ben Templesmith
Pain Industry superstar Ben Templesmith teams up with writer BEN McCool for this deliciously skewed tale of hardboiled noir. Johnny Choker Jackson, once one of Shotgun City's most promising police officers, is a bitter private detective with a terrible case of Alien Hand Syndrome. But he's unexpectedly been offered a job back on the force: provided he can nail a twisted drug dealer selling a very exclusive product, that is. $3.99
Lee: This is an easy pick because Templesmith is the artist. He’s been associated with some of the best horror of the past decade and this appears to be more of the same. The only real question is do I read the single issues or wait for the trade?
Jim: Ben Templesmith is one of those rare artist whose work I will try on almost any project. Now I prefer seeing his work with Steve Niles or Templesmith himself as writer, but I will be getting issue #1 for sure.

Kiss & Tell GN by (W) Jeff Amano (A) Craig Rousseau
Betrayed by all legs and even more curves, Sam Swede finds himself alone and in-between the mob and dirty cops. Having immense strength never gave Sam a reason to use his noggin much, not even as a private dick. So no one was surprised that Sam got taken to the bank when he met a dame with the upstairs to match her downstairs. The real surprise was how Sam came back and made the whole stinkin town pay. The critically acclaimed film noir take on the Samson & Delilah classic in one complete volume! $19.99
Lee: This isn’t even close to a new release considering it was originally published in 2006! But, it’s new to me so it’s worth mentioning. Rousseau is solid artist so I know the art is good. The story sounds strong and it’s based upon some classic literature. Not new, but it could be worth investigating.
Jim: Wow, this is not that easy of a sell job for me, I need to see some reviews and a few preview pages wouldn't hurt. Publisher need to learn how to really push their product and embedded links in their solicitation would be a good place to start.

NBM
On the Odd Hours GN by (W/A) Eric Liberge
The highly successful series of graphic novels co-published with the Louvre museum in Paris continues. Liberge invites us on a guided tour of the museum by night, when the works of art come alive. Our guide: a deaf night watchman who somehow manages to communicate with the souls of those ethereal and timeless works of art. A visual tour de force of the frighteningly fantastic. $14.95 Liberge’s site in French here or an English site with short bio and image here and of course preview here
Lee: While the description reads “Night at the Museum,” I have a feeling this is so much more. I really, really like the idea of being able to ‘see’ the Louvre through the eyes of an artist. And, NBM is one of the better publishers of Euro material so I’m betting this is good.
Jim: Since not everything gets translated and not everything is published over here you have to trust a little that NBM is picking the cream of the crop and for the most part I think they get it right. At $15 it is hard to go wrong in taking a chance on something that has a good premise.

Glacial Period GN (3rd printing) by (W/A) Nicolas De Crecy
De Crecy, at the sight of the incredible richness of the museum's collection, was overwhelmed and felt small and ignorant. The result is a story set thousands of years hence in a glacial period where all human history has been forgotten and a small group of archeologists fall upon the Louvre, buried in age-old snow. They cannot begin to explain all the artifacts they see. What could they have meant? Their interpretations are nonsense, absurd, and farcical. $14.95 A short bio and image here and previews here
Lee: This sounds even better than the first book. Because I’m sure the characters ‘interpretations’ of art in the Louvre probably isn’t all that different from mine. Between the beautiful looking pages and interesting storyline, I’m sold.
Jim: And this is a 3rd priniting which shows that the demand has been their for this book. TAKE A CHANCE PEOPLE. Try something new, no Tiger I was not talking to you.

Oni Press Inc.
Lost at Sea GN (new ed.) by (W/A) Bryan Lee O’Malley The critically lauded debut graphic novel from Bryan Lee O’Malley (Scott Pilgrim) returns to print! Raleigh doesn't have a soul. A cat stole it - or at least that's what she tells people - or at least that's what she would tell people if she told people anything. But that would mean talking to people, and to her, the mere thought of social interaction is terrifying. How did such a shy teenage girl end up in a car with three of her hooligan classmates on a cross-country road trip? Being forced to interact with kids her own age is a new and alarming proposition for Raleigh, but maybe it's just what she needs - or maybe it can help her find what she needs - or maybe it can help her to realize that what she needs has been with her all along... $11.95
Lee: I know people love Scott Pilgrim but I haven’t heard much about this story. Or at least, I haven’t heard the fervent chants of how good it is. But, this is probably a good way for me to see if I like OMalley.
Jim: I agree, but the Scotty Pilgrim set is the 20 something crowd and you and I are not, so it may still be a miss.

Top Shelf Productions
Complete Essex County SC by (W/A) By Jeff Lemire
THE COMPLETE ESSEX COUNTY collects Jeff Lemire's critically-acclaimed and award-winning trilogy -- TALES FROM THE FARM, GHOST STORIES, and THE COUNTRY NURSE -- into one deluxe softcover volume. Also included are over 50 pages of previously unpublished material (including two new stories). . Set in an imaginary version of Jeff Lemire's hometown, ESSEX COUNTY is an intimate study of an eccentric farming community, and a tender meditation on family, memory, grief, secrets, and reconciliation. With the lush, expressive inking of a cartoonist at the height of his powers, Lemire draws us in and sets us free. $29.95
Lee: I already have this and I sent my copy of ‘Tales from the Farm’ to Jim. So this is as much to tell the world about this as it is to tell Jim about it. It’s a huge collection and well worth it. There’s a hc version too but that’s $50.
Jim: The first part of this story in Tales from the Farm was fantastic and I will be getting this as I sent the Tales From the Farm off to Gwen.

Lee: This is another great month. It's hard to keep saying each month is good but there really are a ton of non-superhero books to enjoy every month.
Jim: Okay just remember you have to try something new away from Marvel or DC this month or I will send Lee pictures of your collections and he will mock them, no seriously he could, he might do it, I can't stop him!
Posted by Lee at Wednesday, December 30, 2009