Siege: The Cabal – A Review 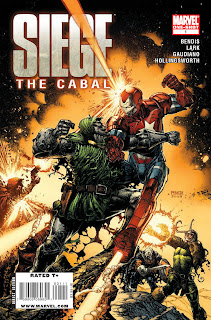 First a little explanation: my real life job has gotten very, very busy and with the holidays my time to be able to devote to blogging has been cut way back. Therefore this review is being used as the regular Friday post and then next week things maybe a little bit back to normal. Also I have some ideas for posts to go up at the end of the year while I am away. One thing which has taken a huge hit is the twitter side of the blog as there is hardly anytime to be able to even make remarks on that. Last and far from least congratulations to fellow blogger (and my daughter) Gwen on her engagement to her long time boy friend Andre! You guys have been and will be great together.

I choose this book because I keep hoping Marvel is going to end the Dark Reign and saw this book as the beginning of the end. I was expecting some great things from this book as I love Michael Lark’s art and it was great, also Bendis usually does well with the bad guy side of things. It was a waste of good art and yet another $4 waste of paper.

I should know better. Bendis is a master at many things. Number one he has been fantastic at bringing the Marvel universe back to a more cohesive style. You can read almost every Marvel Universe book (outside of the X-Men) and know that they are occurring in the same time frame. This has not happened since the days when Stan Lee was orchestrating and writing or scripting almost the entire line. This has it pluses and minuses, but overall I see Bendis as the architect behind it. Bendis also has some great overall ideas. Finally Bendis can drag out a story and a plot point like no one else and he can have some really clunker moments when it comes to characterization.

The basic story is Norman calls together his Cabal and we see that Taskmaster has replaced Emma and Namor who have moved on to Nation X. Doom shows up and has a fight with Norman and will not support his effort to take over Asgard and let Loki run it. Doom and Norman go at it and have a fight. Norman calls out his secret weapon and he crushes Doom. The secret weapon’s face is never seen.

Sidebar: Okay if the secret weapon is Miracle/Marvel Man I think I will puke. The Sentry was brought in as a Superman / Thor replacement and has never worked and now Marvel will have Marvel Man as a Superman in their Universe? Superman is a very tough character to make work as his power level is so insane that everyone else is a joke. DC has powered down Superman and then he always gets back to those godlike levels again and it is hard to make him work in even a super hero universe. In Marvel the problem is magnified a thousand times because they have not had the years of experience developing credible bad guys or actual things that can threaten a Superman. Plus never having had a long term series they are trying to utilize the character in a group setting. So if it is Miracle Man it would be a big mistake. Now back to the review.

Doom is a robot (shock!) and explodes sending out a zillion bug things. The Sentry comes in and saves the day. Why not use the secret weapon to save the day is never addressed. Norman then asks the President to invade Asgard, he says no. Norman and Loki plot to create a reason for the US to have to invade Asgard and the issue closes. Then we see a preview where said event is shown so we know Norman will get his wish to invade Asgard.

The whole thing is very contrived. There has been no rational build up to this event. In fact in Thor, Loki and Doom have been working together a lot and have had the Asgardians leaving in Latveria. Norman is show to be a schizophrenic and while Bendis has been doing this for awhile it is almost too cute and comic book perfect to make it work for me as a reader. Often it reads like good fan fiction with beautiful artwork. As most writers now are ex-fans, I guess that is what we get many times. The problem is the characters and events no longer dictate the stories. The stories are cast with the characters we know, which is the opposite of what it should be. A good writer makes it feel like the characters are writing their own stories.

Overall Grade C – It had lots of good ideas and some nice touches, great artwork, a professionally done comic and miserable execution, all Bendis trademarks. Bottom line this could have been the first eight pages in the first issue of the mini-series.

One last thing we get the checklist for the four issue Siege Event, 37 books in all, which is actually showing restraint for Marvel. If I decide to not follow this I will also have to drop Dark Avengers, New Avengers, Thor and Mighty Avengers as they are tied into this. On the flip side if I pick up the mini-series I can skip the books I wouldn’t normally buy and just add on the mini-series which is only four issues. I will get the mini-series because I still have a level of interest in some of these characters, but I feel I’m closer and closer to getting ready to drop a bunch of floppies and Marvel would be the company to take the biggest cut.
Posted by Jim at Friday, December 04, 2009