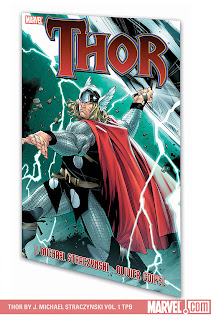 I'm starting with the conclusion this time. J Michael Straczynski is best read in the format of The Brave and The Bold. Here's why.
I read Squadron Supreme. It never ended. Oh, it came to a stop, but the story never ended. Now I've read the re-launch of Thor (both of these titles courtesy of Marvel, in case you live in a deep, dark hole). Seventeen issues, and what did I get? A concept that died aborning.
Now, I don't know who's responsible for Squadron Supreme just petering out. Could be Straczynski moved on to other things. Could be sales stank. Could be Marvel gave up on the idea. Truth be told, I don't really care. Sucks for the reader no matter how it came about.
Thor, though, is clearly an editorial decision by Marvel. In September 2007 (really, most likely July 2007) the first issue came out. Nearly two and a half years later and only 17 issues were done. Now that Straczynski is gone from the title, I sat down and re-read them. I've seen carping about the pacing of the story, but I think the pacing of the publication was more of a problem.
Initially, Thor and Donald Blake are in an unnamed void discussing whether to 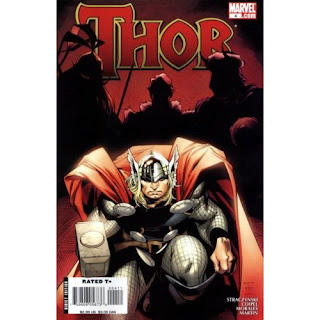 return to Earth, having set from of the cycle of destruction that culminated in Ragnarok. Blake does the convincing to return to Earth, which ends up with Asgard in Oklahoma. That alone was a really interesting touch. Sure, Mjolnir, in its stick form, seems to be found alongside a road by Blake, but that doesn't mean Asgard had to be brought there. It's unclear why Oklahoma. Still, it's a different setting and sets up the possibility of some interesting tales. In these first two issues some local Sooners are developed and Asgard re-created.
From there Thor sets out to bring back select members of the Asgardian pantheon. These various gods are spiritually sharing the bodies of humans around the world. Naturally, the first revived is Heimdal, but in the course of retrieving him, Thor neatly and thoroughly kicks Iron Man's ass. Now, I skipped all the Civil War crap, but this was clearly the tool of government in extremis version of Iron Man, someone Thor holds at least partially responsible for the death of Captain America.
After taking another issue to revive the Warriors Three, Thor is deceived by Loki, naturally, into broadly reviving all the Asgardians, not just the ones Thor wanted to have rebuild Asgard. This occurs after a battle with Destroyer, a mechanical foe animated somehow by Balder. I never could figure that part out. The nice trick coming out of this is what really sets the title in motion for the rest of its all too brief run.
In some unexp 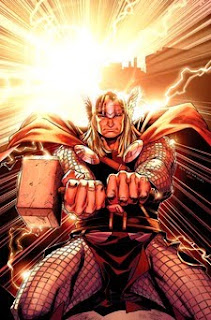 lained way, Loki manages to thwart Sif's return to her own body, leaving her trapped in the body of an elderly terminal cancer patient. Instead, Loki takes Sif's body to use as his own, convincing Thor and the other Asgardians that his return in female form is unexplainable to him as well, but somehow externally representative of his change from being Loki the deceiver to being Loki the loyal subject of Asgard.
Of course, Loki is still Loki and his machinations here are the best part of Straczynski's work. Loki manipulates Thor and Balder alike, first forcing the revelation that Balder is actually a half brother of Thor and, hence, a prince of Asgard and not just another warrior. Loki further engineers a fight between Thor and his revived grandfather, Bor, which results in Thor killing Bor. Asgardian law dictates that Thor be banished from Asgard, resulting in Balder becoming ruler (Odin's dead from the beginning and not revived with the others, eternally fighting the demon Surtur instead).
Loki then maneuvers Balder into taking the Asgardians to live in Latveria, with the quesitonable diagnosis that the Asgardians are homesick for snow and mountains, as well as the freedom to gambol about untrammeled by American laws.
Along the way there are stories of Blake's rekindled relationship with Jane Foster, though it's rather tentatitive, what with her still being in NYC and him being largely in either Oklahoma or the ill defined other realm where he hangs out when Thor's the one present on Earth. More interesting is the development of a relationship between a storm goddess named Kelda and a young man named Bill who operates a diner in the Oklahoma town near where Asgard 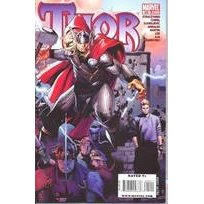 has taken root. Both characters are tabula rasa, so Straczynski has room to do what he wants with them, and it's a well developed relationship.
Toward the end of the run, though, odd things happen. Not odd things plotted into the story on purpose, but rather odd things that don't make sense in the internal logic of the story. Once the Asgardians are in Latveria, Loki not only decides to go back to his own body, but for some reason gives Thor a heads up on where Sif's spirit is and that she can be saved if she's returned to her own body before the old woman whose body she shares dies. It seems more like a plot expedient that brings in Dr Strange to repair Mjolnir, which was damaged when Thor killed Bor. The cure for Mjolnir results in a bonding between Thor and his hammer that means that if it's ever damaged so severely again, Thor too will die.
Oddest of all is in the teaser for the issue following the end of Straczynski's run. Kelda's love, Bill, is killed by minions of Loki after Bill discovers that Loki is procuring minor Asgardian gods for Dr Doom to vivisect so that he can pursue his own immortality. Bill reveals this information to Balder before dying, as well as helping Balder to slay the minions. Kelda vows revenge on Loki and is shown leaving the castle the Asgardians occupy in Latveria in a mist form. In the preview for the following issue she's shown confronting Doom, who simply grabs her by the throat and sticks his hand into her, apparently killing her. What? The woman can turn into a mist form. Kind of easy to escape some guy grabbing you by the throat.
Anyway, that's not Straczynski's fault. The main thing I get out of his run is disappointment. It's clear he was setting up a lot of good ideas and places to go with stories for many years to come (especially at his slow production schedule), but Marvel decided to take Thor back into the heart of the Marvel Universe. That's too bad. Simonson's run on Thor, which really brought the Norse mythology into the character in a way Marvel had not done previously, had a good long run. This should have been a similarly lengthy run, with lots of mythology based stories that occasionally touched on the greater Marvel Universe. Now it's going into the land of the base, pedestrian and uninspired. Certainly nothing worthy of the god of thunder nor the potential that Straczynski created.
Which takes me back to the conclusion. Straczynski is now writing The Brave and The Bold. With each issue often a self contained story, perhaps this is finally the format in which I can read a Straczynski story to its intended conclusion.
Posted by Thomm at Sunday, December 20, 2009