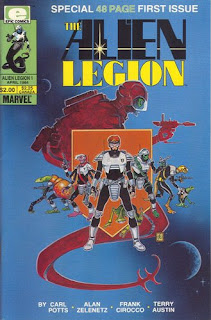 I’m stepping into Thomm’s realm again by reviewing older material, of course this is a quick spotlight type review as opposed to Thomm’s excellent in-depth analysis, which has made Sunday’s a nice day to look forward to. I have come to think of Thomm’s Sunday columns of what the Sunday newspaper used to be when I would sit back and take time to read something that required a longer attention span that your average twitter user.

This is the first issue and first volume of Alien Legion. It was the French Foreign legion meets Star Wars. You have a vast and spawning Galactic Empire and an army that was full of cast offs from tons of different races to serve as the cannon fodder in any endeavor that the Empire was involved in.

In the first issue we learn that the Empire is at war with an insectoid type race called the Harkilons. The first issue focused on a mission to try and stop a group from destroying the natural resources of a small planet and in stopping them not contaminate a young race that is beginning on the planet. In one oversized (48 page first issue) we are given a complete adventure, introduced to most of the main players that we will follow in the Legion and establish the setting of the series. The amount of back story and detail that went into building this series was obvious and the creator and writer did a hell of a job in delivering it all in one issue. I have to think that the fine hand of Archie Goodwin was a big help as Archie was truly one of the great editors in comics.

The artwork was stunning also. Frank was given the task of drawing all of these different characters and almost every member of the Legion was from a different race. Frank has a nice clean line and had a strong sense of realism to his work. Of course Terry Austin was one of the best inkers in the business and was a big plus. I think he could have inked stick figure drawing and made it work.

I picked up this first volume for a few dollars (maybe $10 including shipping) and then won the second series two on E-Bay and with shipping it was $9. I love reading stuff that I long ago sold or gave away if I can find it for a reasonable price. I then re-read it and mail it onto to someone (probably Gwen).

Anyway I thought this was such a great concept and had potential to be a huge video game or even an online RPG type game, a movie or even as a cartoon. This series has tons of potential and that made me curious to look up Carl Potts and he consented to do a short interview for me.

Jim: It has been a lot of years since you have been in comic books, but many creators have come back to the form over the years. Can you share some of what you do now?
Carl: Since leaving comics, I’ve been a creative director in interactive gaming, marketing and education. I’ve also written a handful of screenplays and a blog.

Jim: Do you have desire to get back into comics? If yes, in what capacity?
Carl: I love the comics medium and visual storytelling in general. I’d be interested in a creative executive or editorial position if the right opportunity appeared.

Jim: From a quick review of Alien Legion it appears that you were the creator and producer of the series. Any reason you did not write or draw any of it yourself?
Carl: The short answer: When Alien Legion was launched, I was a full-time editor at Marvel and had a number of freelance commitments on top of that. I had no time to do much work on the title directly. Waiting until I did would have meant not launching it until years later.

Jim: Is Alien Legion still an active project for you in any form?
Carl: My Alien Legion screenplay was optioned by a studio some time ago. Not sure if/when it’ll end up in front of the cameras. Keep you fingers crossed!

Jim: As Epic was a creator owned deal, I assume you still own the rights to these characters. If that is correct have you any plans to ever publish the book or release it as webcomic? If not who currently owns the rights?
Carl: I do control the comics publishing rights. If I can negotiate the right deal, I’d like to arrange to collect the original material and produce a new series.

Again just a short interview, but I for one would love to see the first volume in a hard cover collection and hope that one day we see Carl’s work in comics again.

Carl also shared with me where about the collected editions: There have been 5 Alien Legion collections over the years, 3 from Checker and 2 from Titan:
Force Nomad
Piecemaker
Footsloggers
On the Edge
Tenants of Hell


Finally check out a great fan website that chronicles the Alien Legion.