The Great Unknown #1 - A Review 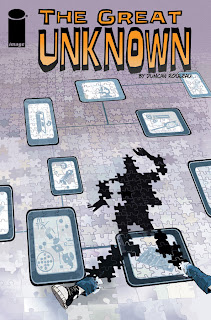 A rare Image book that makes the grade for me lately. I have not gotten past issue #1 of a bunch of Image books lately and this book was a pleasant surprise. I was very ambivalent about Metal Men from Duncan Rouleau and was a little apprehensive about going into this series as I did not have a handle on the premise. It is a very cool book.

Our central character is Zach, a super genius inventor slacker and drunkard. We are introduced to Zach as a person who is the smartest man in the room, but does not care and has contempt for the rest of the world. His brother saves him from barroom brawls, his family tries to do an intervention and all his great inventions are apparently lost as someone always gets the idea to the patent office before him. The end of the first issue a strange man tells Zach that his mind has been compromised and his ideas stolen and he is not where he should be in his life. He leaves his card with Zach and leaves Zach just hanging, wondering what to do. Told with great humor and great art work and a limited color palette, this book is a winner.

As a bonus we are given a one page cartoon “Salutes to History’s Unsung A**holes” as we find out that the great mathematical genius Archimedes was slain by an overzealous Roman guard because he did not respond to his request fast enough. So the world loses a great mind due to an idiot power happy Roman guard.

Look what else you can see!