As is no doubt evident by now, I like a certain literate quality to my comics. Sure, capes are fun and all, but what sticks with me is Sandman, Fables, Sin City, and the like. Writing that references a wider world than comics and super heroes.

So it should be no surprise that I took a liking to Concrete. Written and drawn by Paul Chadwick and published by Dark Horse, it was originally a black and white series, though there were some later issues done in color. More accurately, it was a number of different series, rather than one long run, a la most super hero titles. In fact, it was more like a series of stories told in limited series.

Starting in Dark Horse Presents in 1986, the Concrete stories were about the surprisingly mundane life of Ronald Lithgow. Aside from his science fiction origin, Concrete's stories consisted of a lot of internal monolog and occasional fits of action. Concrete was also unabashadly liberal, often taking swipes at Reagan era policies and conservative social values. As a result, it can be viewed by the reader now as either dated or prescient, depending on you point of view.

Although there were numerous limited series, and a long series of 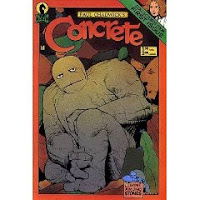 appearances in Dark Horse Presents, I'm looking at just the series from 1987-1988 that ran 10 issues. I only have the first 9 Somehow I missed the tenth. Anyway, this was as close as the Concrete concept got to an ongoing series. The various limited series tackled a given story line in 4 or 6 issues and called it a day, though the ongoing story of Concrete's life advanced in each series. 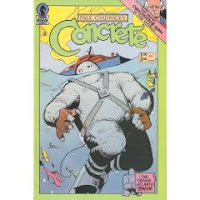 In the Concrete comic we learn the back story, but not until the third and fourth issues. This was a little different for me at the time, when most new series presented the origin right up front. It's clear, though, that Chadwick had the plotting well in hand and didn't need to force the origin right away. The stories were always about how Concrete operated in the world rather than how he came to be in his condition.

And what a story that was. Ron Lithgow and his friend, Michael, are hiking and camping in

mountains when they enter a cave that turns out to be the entrance to a hidden alien space ship. Their brains are transplanted from their bodies to 1200 pound artificial bodies that are humanoid but look like, well, Concrete. The aliens who perform this operation appear to occupy the same sorts of bodies, and have also transplanted the brain of a deer and the brain of a bear into the same kind of bodies. Michael helps Ron to escape the aliens but can't bring himself to escape, devastated by the loss of his own body and hoping to find a way to make the aliens put his brain back in his own body. The aliens attempt to kill Ron even after he reaches the cave and jumpts into a lake, but he escapes. The aliens then take off, never to be seen again. Michael, too, is never seen again.

Ron then makes his way to Senator Douglas, for whom he was a speech writer, up until his brain transplant. He's turned over to the government and undergoes extensive testing. He meets Dr Maureen Vonnegut, who's one of the government scientists probing him. He eventually grows tired of the repeated testing and attempts to escape, resulting in a bazooka or something similar being used on him and nearly blowing off his left leg. After his leg is repaired, and an acces panel added to it during those repairs so his internal fluids are more easily accessed for testing, Concrete reaches an agreement with the government.

He's allowed to leave and lead his own life, but at a price. He has to adhere to the lie that he's a

cyborg created by the government and the only survivor of a now abandoned project to create these cyborgs. To make the idea of the government killing off people in such an experiment, he and the fictional others are all supposed to have been suffering from terminal illnesses. He's not to reveal his actual identity or how he came to be in this body. He also has to go through an introduction process that minimalizes him by making him plug a plethora of products, sell action figures of himself, and make talk show appearances. The idea is that he'll be so ubiquitous that the public will tire of him and not take him seriously. As a part of the deal, Concrete, who's now fallen in love with Dr Vonnegut, accedes on the condition that she be assigned to monitor him.

That's where the stories pick up. Concrete lives in LA and hires Larry Munro, a grad student and aspiring novelist of questionable talent, as his personal assistant. With bulky hands, Concrete isn't able to operate many things, such as phones, key boards, and vehicles. His primary mode of transportation is in the back of a pick up truck. Chadwick wisely uses the introduction of Munro as our introduction to Concrete, which then allows him to have Concrete tell Munro the origin story once Munro has gained Concrete's confidence.

Each issue can largely be read as a stand alone story, though. The first issue, aside from hiring

Munro, has Concrete attempting to rescue coal miners at a cave in in Kentucky. It doesn't go well, with Concrete himself being caught in another cave in and most of the miners having been found to have died in the initial cave in. The second issue centers on Concrete's attempt to swim the Atlantic, which also fails rather miserably.

Concrete, though of a super hero physical structure, is clearly not super. To some degree, it reminds me of TV's The Greatest American Hero, without the comedy. Concrete's story is more one of pathos. Although he's in this more powerful and more durable body, he still thinks of himself as the overweight, geeky kid he was. At the time of his transformation he was going through a divorce, too. Concrete doesn't come from a place of mental confidence or superiority. At times, this leads him to over compensate. He attempts physically demanding feats, such as the Atlantic Ocean swim or a climb of Mt Everest, simply for the challenge. Though he's more durable, he's not invulnerable, so he still risks death in these attempts.

More significantly, he has no sexual organs. His love of Vonnegut, then, can never be

consumated, even if she were to feel the same toward him. In this 10 issue run, there's no direct indication that she does, though there are certainly many hints that she is, at the least, feeling some affection for him. Perhaps because of this, Concrete, with the money he's made on his many endorsements and so forth, has become a collector of art works featuring nudes or semi-nudes. One of his purchases even resembles Vonnegut. Having bought many of the later mini-series, I know that Vonnegut does eventually confess to loving Concrete and Chadwick presents one of the most erotic while one sided sexual encounters I've ever seen, in comics or anywhere else. But it's all rather unrequited affection on Concrete's part at this stage of the story.

Beyond these personal developments in the characters' lives, the series spends a lot of time thinking. Thought balloons for Concrete are often internal monologs of his thinking on issues from the environment to media to politics to culture. In fact, the environment is a frequent area of exploration for Chadwick. In the story leading up to the Mt Everest climb, he has characters discuss the denuding of the mountains leading up to the base camp areas for the climbers. In other issues he has characters talk about the life in a bubble that comes with fame and media circuses, not just for Concrete, but a singer Concrete plays bodyguard to for a time. Chadwick looks into disease and its effects on those suffering from disease but also those who care for them. Concrete responds to a letter for help by spending a season helping a family save its farm, which he (and Chadwick) use to advocate for organic farming methods.
Many times now we see writers putting forth stories asking the question of what would happen if a super hero were really put into our world. Chadwick took an early look at that, and to me, the most realistic. Whether you agree with his or the characters' point of view in the world of politics and such, the fact that nothing particularly super happens to this super hero is what I would expect. No asteroids hitting the earth. No super villians popping out of the woodwork. Deservedly, Chadwick won both Harvey and Eisner awards for his work. I don't know why, but from what I can tell, there haven't been any new Concrete stories since 2000. More's the pity.
Posted by Thomm at Sunday, February 01, 2009