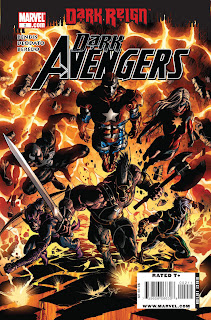 On occasion I like to do a review that is an immediate reaction as opposed to one where I may have given it more thought or let my opinion percolate in my brain for awhile. Dark Avengers in one insipid moment inspired me to do such a review.

Before I get to that moment first I have to compliment the artwork. Mike Deodato has changed his style dramatically from the days when he drew Wonder Woman and I have always wondered if Marvel asked him to or if he shifted it, but his work has a heavier line and a strength to it that is more akin to a Neal Adams school of art. On occasion his panel layouts can be distraction as they are slanted or some other wonky thing. It appears to be for the sake of changing the layout as opposed to for the sake of storytelling, but all in all Mike’s work is great. The colorist Rain is also very good. Whenever I see that name on a comic I know the coloring will be well done. While a dark toned book and often borders on too dark, it never approaches that murky and muddied effect that some colorists give a book.

The writing is decent. I know some fellow fans feel I have a bad opinion of Bendis, but I just think he has great ideas, but often the voices of his characters in a group book never ring true. When he writes Ultimate Spider-Man, Luke Cage and Jessica Jones, the characters seem to have a distinct voice. When he writes a large group of people if it was not for the arrow on the word balloons I would be guessing who said what. I have told people the Bendis should be the editor of Marvel or at least a large group of the MU where he would be the guy giving direction to a group of books with others doing the actual scripting of the books. This issue highlights some of Bendis strengths and weakness. The strength is the concept of the book and the first mission being the wrong one. The weakness is he loves talking heads, but in my view misses many of the voices of the characters. He is somewhat saved as many of these are villains and have a limited history so it is easier to not notice it as much.

What I found to be insipid and made my head hurt trying to think about it was a time travel thing in this issue. Morgana La Fay had traveled in time to kick Dr. Doom for what he did to her. She decided to beat him as an adult so it would have meaning. She has beaten Doom when the Dark Avengers show up. Norman (Iron Patriot) tells the Sentry to take her out and don’t hold back. So the Sentry goes down and rips her head off. I will skip why that scene seems so out of place. Next the Sentry disappears and Morgana shows up and says “Understand this, you simple, simple mortals of flesh… I am not from your time. Even if you kill me here. I can come back from my time in the far past and destroy you. Do it again and I’ll come back in your childhood and remove you from existence.” WHAT THE F***!

I keep trying to wrap my head around it. Okay I’m bouncing around in time and I get killed. No matter where I am in time, that is the end of my life so I can not possibly now go back in time and just show up again. I have read many time travel story in comics, books and watched TV shows on time travel and while I know the whole thing is a bizarre idea, it has to be used with some logic. This made no sense at all. It was flat out stupid and used because it sounded cool and threatening as dialogue as opposed to actually something that was thought about. That is why I can always respect Warren Ellis, Grant Morrison and others, they may have so whacked ideas and concepts, but that have a thought process behind it and an internal logic if nothing else. This was pure old school comic book crap that should not fly, but I don’t think any editor has any power over any big name writers anymore.

One other big sticking point for me is the $3.99 price tag for a 22 page comic. The argument that the biggest selling comics where $3.99 last year is invalid, because 8 were Secret Invasion the biggest pushed comic from Marvel and if you wanted to know anything about the MU you needed to read that. Uncanny #500, Final Crisis #1 and at least one Secret Invasion books were more then 22 pages. This is a regular series 22 pages and $3.99. I hear the argument that if it is good it does not matter, that is bullsh*t too. Marvel has made this a central book to understand and get the whole of the Dark Reign, so again you are almost forced to buy it or drop a bunch of Marvel books. I have the disposable income (luckily) right now to not worry about it, but if it remains this insipid it make this book easier to drop.

Overall Grade C – Great art, flawed story and a time travel idea that made my head hurt.
Posted by Jim at Wednesday, February 18, 2009