War of Kings – Marvel Takes it to the Consumer Again 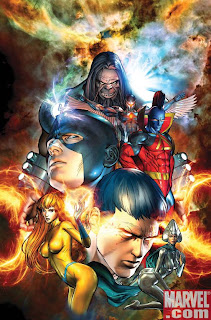 “event” with War of the Kings and instead tries to rape me for more money.

A prelude to the series will only be available online via Marvel Digital Comics and you have to be a subscriber to get it.

A quote from the Newsarama article “War of Kings: Warriors. You have to be a Marvel Digital Comics Unlimited subscriber to read these stories, which together essentially make a four issue miniseries, but split into 8 parts. This is a prelude to the main series, and will provide the motivations of these four characters in the roles they play in the larger series."

Now I know I do not have to read these comics to understand the mini-series, but I do not like they I’m not being given a choice to be able to get them as part of this series. So far all of the lead in stuff (except Darkhawk) has been well done and enjoyable, but I’m not signing up for their service just to get these additional series.

Every time I want to give Marvel a little credit the greed in these people shows up. The $4 price tag on mini-series and number 1 issues is part of it and this is another grab for your wallet. I’ll be willing to bet they will print this material down the road in a trade or hard cover.

I get they want to get subscribers to their service and I get they are trying to move out in front on the digital market, but do not do it at the expense of your fan base or f**k those fans who are supporting your stories. Commission new work and new series for the digital world, the new Claremont series would be a great for this type of world or an anthology book like Marvel Comics Presents and do eight pages weekly with rotating characters. You have a huge list of characters that don’t get any play and the digital world could be where you do it. It is nice to know in these tough economic times Marvel is still willing to try and pick your pocket.

This type of deal smacks of deceit and greed. It is deceitful to draw a group of fans into an event and then tell them to get more of the story you have to sign up for a digital service and greed as in you are trying to squeeze the last dollar out of the same fan base. The digital fan base can overlap but should be built with new customers as well as old. For a print head like me – f**k you Marvel and keep the background stories.