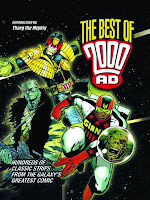 Prion
Best of 2000 AD HC
With hundreds of comic strips, features, and articles from the utterly original and anarchic cult comic that defined a generation, this astronomical book pays homage to the greatest sci-fi magazine of them all. Following an introduction by Tharg the Mighty, 2000 AD's long-standing alien editor, all the best strips are included, including ABC Warriors, Bad Company, D.R. and Quinch, Flesh!, Halo Jones, Harlem Heroes, Invasion!, Judge Dredd, MACH1, The Mean Team, Nemesis the Warlock, Robo-Hunter, Rogue Trooper, Slàine, Strontium Dog, The V.C.s, and more! $23.95
Lee: I am very interested in this but 2000AD has a lot of lot of published material. Trying to focus on a “best of” would be akin to Marvel or DC doing a “best of.” There’s just to much material to pick from. Not to mention, the best of the best (Moore’s Future Shocks, Bolland’s Dredd) have already been collected. If you don’t have anything from 2000AD then this might be worth it, but otherwise I would pass.
Jim: I agree, there are many other collections focusing on the individual strips, as a primer this maybe okay.

Pure Imagination Publishing
Four Frightened Women by (W) George Harmon Cox (A) Earl Whoton
One of comics" first graphic novels is reprinted for the first time since its original publication in 1950! Issued as a paperback, few collectors are even aware of its existence. Follow Kent Murdock, news photographer, as he comes head-to-head with dames and death! $25.00
Lee: Where does Greg Theakston find this stuff? I’m sorry, I love the GA but there is some material that even I’m not interested in. This would be one of those books. I read the last offering of this nature (Rhymes with Lust) which was another 1950’s graphic novel and that was terrible. I’m not taking a chance on this.
Jim: This type of material is interesting from a curiosity standpoint, but with so many high quality projects out there I can not see wasting $25 for a curiosity.

Rebellion
Judge Dredd: Complete Heavy Metal Dredd GN by (W) John Wagner, Alan Grant (A) Simon Bisley, John Hicklenton
Dredd gets turned up to 11 in this pulse pounding collection of stories featuring Mega City One's finest dishing out the justice like he means it. Thrill to the fully painted art work of Simon Bisley, artist behind the classic Slaine The Horned God. Cream your whammy bar over the twisted and bizarre visions of John Hicklenton, the man behind the terrifying art featured in several Nemesis The Warlock strips. This is Dredd at his meanest and most ass- kicking. So get your sweaty mitts on this beast of a collection and raise your goblet of rock to The Law! $19.50
Lee: Heavy Metal Magazine is known for publishing some extreme stuff. This should be a no holds barred Judge Dredd. I imagine this to be the JD version of Punisher Max with no limits on the violence. I am sooooo getting this.
Jim: Lee nails it with a perfect description of what this material should be. Judge Dredd has easily been one of my favorite characters from the Mother Country.

The VCs: Down GN by (W) Dan Abnett (A) Henry Flint, Anthony Williams
Earth's solar system, 2581 AD. Fifty years have passed since the human/Geek war and the surrender of the Geek homeworld. Once a star-trooper and a member of the elite battle unit known as The VCs, Steve Smith is now just a janitor, haunted by what he saw during combat and the memories of his fallen comrades. To mark the fiftieth anniversary of the end of hostilities, Earth is preparing to celebrate Peace Day with a massive air display. But in the depths of space an old enemy stirs! $22.99
Lee: Have I mentioned how much I love these 2000AD reprints. And this looks like a great one! Yeah, yeah, yeah, Abnett is a great writer but Flint and Williams are better artists! Actually, I’m all about Williams art!!!! Just in case… he’s the dude who drew Promethea.
Jim: Wasn't that JH Williams who drew Promethea? Henry Flint is drawing Haunted Tank for Vertigo right now and he is a strong artist. Dan Abnett is one of the best writers in comics and consistently delivers exciting material so this is an easy one to order.

Red 5 Comics
Atomic Robo: Shadow from Beyond Time #1 by (W) Brian Clevinger (A) Scott Wegener
New York City, 1926. Atomic Robo's dull night of studying for a physics exam is interrupted by a duo from Nikola Tesla's past with a dire message: the imminent doom of all life in the universe! Guest starring Charles Fort, Howard Philips Lovecraft, and the Tunguska Incident. This is steampunk science fiction at its finest! #1 of 5, $3.50
Lee: Always gotta mention a Atomic Robo series! The first series was good. The second series was good. I’m always happy to see this and you should be too.
Jim: The first series was comics at its best, the second series was a not as good, but this is a book I'm looking forward too. Red 5 has been in a funk lately as they started off with 3 series and now seem to publish one book a month and that is about it. 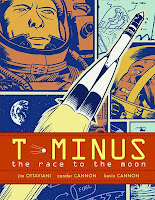 Simon & Schuster
T-Minus: Race to the Moon GN by (W) Jim Ottaviani (A) Zander Cannon, Kevin Cannon
T-Minus, the exciting story of two world superpowers racing to land a man on the moon, is depicted through vivid, compelling graphic artwork, taking readers through the history of the race and turning the engineers and astronauts involved into personal and real characters. For anyone who has looked up into the night sky and dreamt of unexplored vistas, T-Minus will take them to a time when dreams were within reach and the lure of space seemed limitless. $12.99
Lee: What can I say, this is a book near and dear to my heart and something great to share with my children.
Jim: There was a good article in Newsarma about this book and I like the concept of doing a younger reader graphic novel that focuses on the people who made the dream a reality from an engineering and scientific standpoint. 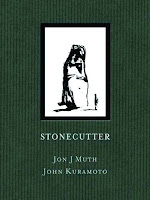 St. Martins Press
Stonecutter HC by (W/A) Jon J. Muth, with John Kuramoto
This adaptation of a Chinese folktale begins with a man's dissatisfaction with his life. Weary of being a stonecutter, he becomes many things in his quest for authority, each time finding that greater power lies elsewhere. Rooted in Taoist principles, Stonecutter is an exquisite tale about self-acceptance. Originally published in a small, limited edition fifteen years ago, Jon J. Muth republishes the story because "Certain stories leave you with more than when they found you. They shed light on something, or unknot something for you, or offer some insight. At least they do for me. Stonecutter is one such story." This inspiring tale pushes the boundaries and possibilities of graphic literature, and is now available for a new audience. $14.99
Lee: Let’s start with art by Muth! That alone makes this book worth it. Muth is such a great artist that I have most everything he’s every done. Let’s pause for a moment to lament the lack of a Moonshadow hc!!! Back to this book, pairing Muth with a Chinese folktale is a perfect pairing. I’m looking forward to reading this.
Jim: This looks to be a great book to pick up. The phrase certain stories leave you with more then when they found you is very true. I have found many such insights in different books over the years and look forward to reading this book.

Studio 408
Smuggling Spirits HC by (W) Ben Fisher (A) Mike Henderson
Set in a nightmarish vision of the past where deadly monstrosities roam the shadows of Prohibition-Era America, Al Stone is a bootlegger who finds himself on the run when he inadvertently stumbles upon the bloody secret of the creatures" survival. As the beasts close in to take back what's theirs, Al and his young ward, Nathan, make their final stand in this blend of horror, drama, action, and suspense. $20.99
Lee: I picked this many, many moons ago when it was collected in a tpb. I read it and I enjoyed it. It’s a very good story dealing with demons and mobsters during Prohabition. My only problem with the trade was the art was obviously better than the printing process could capture. Hopefully those problems are fixed because this will make a nice hc if they are.
Jim: Which means this is a book I need to see before I decide to buy it.

Titan Publishing
Best of Battle Vol. 01 SC by (W) Pat Mills, John Wagner (A) Joe Colquhoun, Carlos Ezquerra.
From the same editorial minds that revolutionized British comics with 2000 AD, Battle is the greatest British war comic ever published! First published in 1975, Battle was developed by "young gun" writer/editors Pat Mills and John Wagner and became home to the finest British war stories ever told. Over 250 pages of relentless action are collected here, from the desperate dogfights of Johnny Red to the down-and-dirty Rat Pack, the reflective, critically acclaimed Charley's War and the offbeat Major Eazy! $14.95
Lee: I think that I’ve picked this before but it says that past orders have been canceled so I’ll mention it again. Where as the best of 2000AD is impossible, a best of Battle should be really easy. Especially since I’ve never read anything from Battle except Charley’s War.
Jim: Which means you have no clue as to the quality of the material. I wish the comic shops could afford to carry stuff like this so I can check it out before buying it.

Top Shelf Productions
League of Extraordinary Gentlemen III Century -1910 #1 by (W) Alan Moore (A) Kevin O"Neill
Alan Moore's familiar cast of Victorian literary characters enters the brave new world of the 20th century, set against a backdrop of London, 1910, twelve years after the failed Martian invasion. In the bowels of the British Museum, Carnacki the ghost-finder is plagued by visions of a shadowy occult order who are attempting to create something called a Moonchild, while on London's dockside the most notorious serial murderer of the previous century has returned to carry on his grisly trade. Working for Mycroft Holmes" British Intelligence alongside a rejuvenated Allan Quartermain, the reformed thief Anthony Raffles, and the eternal warrior Orlando, Miss Murray is drawn into a brutal opera acted out upon the waterfront by players that include the furiously angry Pirate Jenny and the charismatic butcher known as Mac the Knife. This book is the first of three deluxe, 80-page, full-color, perfect-bound graphic novellas, written by Alan Moore and illustrated by Kevin O"Neill, each a self-contained narrative that takes place in three distinct eras, building to an apocalyptic conclusion occurring in our own twenty-first century. The return of the League is not to be missed! $7.95
Lee: The return of Alan Moore’s LoEG. I am eagerly awaiting this. While I enjoyed Black Dossier, I’m hoping that this will be better. Actually, this will have so much hype preceding it that I’m not sure why we bother mentioning it.
Jim: After trying to read Black Dossier and not succeeding I have no real strong desire to get this book. Plus Moore has been bordering on pornography more and more lately and being freed of any constraints is not an Alan Moore I want to read. I'll wait for reviews.

Lee: I'm still worried about the sudden drain of new material into the back of previews but there was lots to choose from this month.
Jim: But we have not seen the effects of the change from Diamond and the overall impact of the start of the New Depression has had on small press yet. A bunch will probably go under this year and/or be harder and harder to find. Print on demand here I come.
SEE YOU ALL NEXT MONTH
Posted by Lee at Wednesday, February 25, 2009