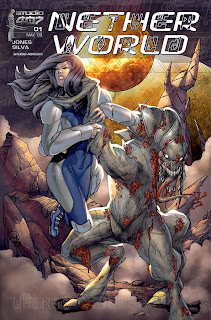 This is was a fun comic. It was half Star Trek, half Aliens and half Night of the Living Dead. After reading the first two issues I want to know how the whole thing turns out so I have to now wait months to see the rest.

The story starts with a basic Galactic Empire of humans and we are in an apparent cold war with a race called the Thanati. The first issue is a lot of set-up and an introduction of the premise. The Thanati planet had a major explosion and the humans want to know what happened. Our main character Emily is recruited to be involved because she is ex-military and one of only a few people who have ever been on a Thanati planet. She is also one of the few people in the story who believe the Thanati are not the war mongering race every one believes them to be. 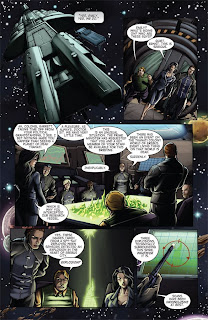 After that the rest of issue one is setting up who the team is and giving a lot of background and introduction for each character. I thought the book spent too much time on this and was a little too dense for stuff that had a lot of stereotypical characters. There is nothing wrong with stereotypes as they are a nice shorthand in filling out a large cast, but you don’t need to spend a lot of time on them if they are not integral to the story.

Issue one ends as they get to the planet and they see what is essentially a field of dead Thanatians bodies. Then they come alive and start to attack our intrepid band.

The second issue is where the pace of the book picks up a lot of the mysteries start to come to the forefront of the story. They discover what happened or at least how it happened, but not why. We have group members being killed, some nice battle scenes and much more going on. I’m not going to get into it in detail except to say that the second issue really sold the series for me in wanting to see how they get out of this box.

As a sci-fi / horror film type deal you always want to guess if anyone gets out alive and how they will do it. This group is cut off from their ship, surrounded by Alien Zombies and have 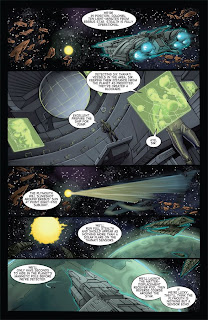 apparently come to the notice of the Thanatian fleet.

The artwork is not bad. It serves the story well. The page design and layout work is well done and helps to tell the story. I was never lost. The characters are easy to tell apart and the expression work is decent. I’m unfamiliar with RB Silva, but overall enjoyed his work. Just because someone is not a John Cassady does not mean the art is not working for the story. One scene which I especially enjoyed was in issue #2, where Ghost has her gun over her shoulder and shots the alien zombie that is about to attack her.

Since this book is coming out in April I believe you need to tell you comic store to order a copy as many small press books don’t get the shot they deserve to be put on the rack like many throw away Marvel and DC mini-series. That is a whole long rant of what I belive is wrong with the industry.

If you enjoyed Aliens, Zombies and/or some Galactic Empire type material then this book is worth the price of entry.
Posted by Jim at Monday, February 16, 2009