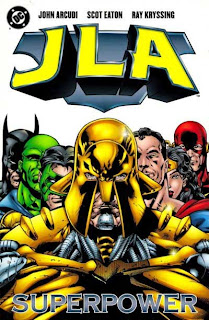 
Rarely, very rarely do I ever do reviews of older books and as Thomm does a brilliant job every Sunday in Comics Cabinet I almost hate to tread on his territory. I have very few regular comics anymore and have about one long box worth of various stuff and when I re-read it, it is then shipped off to a new happy home (most often to Gwen, who in turn gives away many of her books to follow comic fans).

This week after reading everything and doing some other work (for my real job) I sat down and re-read JLA Superpower. This is a book by John Arcudi (BPRD). I had always thought it was a good book and on a second reading it is a great comic. It examines many themes which are being constantly examined and re-examined today. This book was done 10 years ago.

The base storyline is Mark Antaeus is a man who appears to be blessed with incredible strength and limited invulnerability. He helps his community in many ways and is always gracious to the police and the people whom he helps. He is a true hero and he worships Superman. One day in trying to save a family from a fire he cannot and his inability to be able to save them drives him to acquire more power at the cost of much of his humanity. After a couple of years he returns bigger and stronger with more power then ever before.

The JLA recruits him and he does not get along with GL (Kyle Rayner) but Superman likes him and Anateus is in awe of Superman and idolizes him. They have a lot of successes with Mark, but Mark notices they are not able to do anything about a dictator (who appears to be a Saddam Hussein stand in.) Superman sees Mark’s concern for the dictator’s victims and organizes a plan to help the people with medicine and food, but Mark wants to stop the dictator and goes solo to do so, but ends up killing him. The JLA now goes to try and stop Mark and ultimately allows Mark to fly off as they realize they are making things worse by provoking him.

The aftermath of what Mark has done starts to hit home as the country is in even greater turmoil without the dictator and tens of thousands die in a bloody civil war. Mark can’t deal with what he sees as another failure and essentially kills himself.

We close with GL telling a distraught Superman that it was for the best as who knows what Mark would have done next. Superman turns to Kyle and tells him “This is what he would have done next!” showing Kyle the helmet that is all that was left of Mark. Then he continues and says “he went too far, and he knew it and he couldn’t stand it. He wasn’t a bad man; he was a good man who did a bad thing. And if you can’t tell the difference between the two then what the hell are you doing here?” Which I thought was a powerful way to end the book.

In looking up the name I found this “The story of Antaeus has been used as a symbol of the spiritual strength which accrues when one rests one's faith on the immediate fact of things.” This derives from the fact that Antaeus is a character out of mythology that drew his strength from being in touch with the ground. It was a great use of the name by the writer to match it up with this character. Mark could only see the immediate and acted on what he knew to be right.

I enjoyed the idea that even super powers can’t solve all the world’s ills and it is hubris that makes someone think they know what they are doing will make things better (see US Government in many ventures and Stimulus packages). I also felt bad for Mark as we find out that his father created him with experiments on his body when Mark was a child. All Mark wanted to do was to try and help and he was his own harshest critic. I also enjoyed how powerful Superman’s feelings were about the entire thing and how hard he put Kyle down. All in all it was a great story that has stood the test of at least a decade.

The art by Scot Eaton (on pencils) and Ray Kryssing (inks) was extremely strong and well done. This appears to have been a job that they were able to do with less deadline pressure as each and every page was well done. The colors by John Kalisz were also beautiful and I just remember seeing his work in a new series call “The Mighty”. Last and not least the editor was Peter Tomasi, who is one of DC best writers right now. A lot of top flight talent on this book.

Anyway if you never read it, check out the back issues boxes and wait for a sale as I’m sure you can pick it up for a buck or two from most stores, but even for $5.95 ten years ago this was well worth my money.
Posted by Jim at Thursday, February 12, 2009