All righty. It's off to the mind of Grant Morrison. True, I haven't read everything, or even a lot, of what Morrison has written, but of what I have, Animal Man seems to reflect Morrison himself more than any other. Morrison says as much in the 26th issue of the series, his final issue.

Now, off the top, I have to admit, I came on to this series late. I started with January 1989's 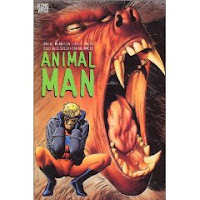 issue 7, missed the next two, and then was fully on board with issue 10. I never hunted down the missing 8 issues, either. Truth be told, I finally picked up the trade collecting the first 9 issues just this week. Morrison writes the intro to this collection, and maybe it reveals a little too much.

The series was originally intended as a 4 issue mini-series, so Morrison didn't intend to do any more than re-introduce the character, post Crisis on Infinite Earths, and then leave it to someone else to write any further adventures. Those first four issues do an admirable job in that re-introduction. Animal Man is established as a husband and father, with a 9 year old son and 5 year old daughter. He goes from apolitical and rather apathetic seeker of adulation and celebrity earnings to animal rights activist and vegetarian. True, scientists are charicatured as torturing animals for the sake of a sort of "let's have fun and see what happens" attitude that's not justified by real life science, but Morrison at least acknowledges a conflicting point of view. He artifically poo-poos any countervailing arguments away, but he at least recognizes them.
Issues 5-26 are hailed as seminal works for their philosophical examinations and pursuit of

animal rights activism, but I find this part of the run to be nearly pointless and self indulgent. While Buddy Baker (Animal Man, in case you didn't know), has some interesting adventures, obtains some new powers, and becomes a bit more logical in the source of his powers, I think the entire thing runs off the rails into superficiality masquerading as depth when Baker escapes the pages of his comic (within the pages of the comic, of course) and confronts Morrison, his by then departing writer. From the depiction of Morrison as a pale, Morpheus-esque personage to the shilling for PETA, the entire thing just feels forced.

I don't know which came first, the depiction of Neil Gaiman's Sandman or the drawing of Morrison. By order of publication, it's clearly Morpheus first. Perhaps the depiction of Morrison as resembling Morpheus is homage, in the sense that copying the personification of dream is stating again the role of the writer in shaping the comics character. Whatever the intent, it didn't work for me. Instead of Buddy Baker learning about himself, and me as the reader learning about him, I wind up with a story that tells me what I already know: characters are shaped and directed however the writer wishes. No kidding. Gee, thanks. I've never read a book or comic before. Such elucidation.

Really, breaking down the 4th wall? Advocating for animal rights? These are the lasting legacies of this run of Animal Man. What did the former get us? Nada. Hereinafter, Animal Man is just as much the unaware comics character as any other, with the exception of a slight nod to it in 52, which, of course, Morrison helped write. So, what purpose did it serve? It showed Morrison could bring himself into the story and expound on the relationship of the writer to the character. That's what forwards are for. It's not a story unto itelf. Every part of the Morrison run that I read felt like the story was being diverted every time a character addressed the fact that people were reading the comic or the artist was changing a character's appearance or the writer was making their lives a stage, to paraphrase Shakespeare.

There were good stories told, too. The entire element of characters that had been wiped out by Crisis on Infinite Earths coming back via the Psycho Pirate, who remembered the pre-Crisis worlds due to being at the center of the whole thing, was great. Those stories could have been told without the self-referential to the writer.

Animal Man as animal rights crusader? Ok, that fit in with the character. But, on the whole, it

was rather one sided. Only twice that I can think of does the animal rights point of view take a hit. Once, when Baker is on a TV show opposite an advocate for animal testing, and Baker's "defeat" there is portrayed as a lack of savvy more than a loss on substance. Another time when some Animal Liberation sorts burn a lab after freeing the animals, which causes injuries to firefighters. That one's just a small stab at extremism rather than at the underpinnings of the animal rights philosophy. In fact, there's evidently nothing wrong with burning a research institution, as long as there's no risk of anyone getting hurt. How about the more remote harm of depriving people of the benefits of the research? Computer models aren't going to cut it and going direct to human trials is a sure way to kill off a lot of people.

Where's the counter arguments against vegetarianism? Nary a one that I saw in 26 issues. No acknowledgement that humans are omnivores. No consideration of the retardation of the species that would have occurred had our progenitors not been meat eaters. Only once did Baker/Morrison address the illogic of the idea that animals are equal to humans. Naturally, it was swept aside.

And here's the conundrum of the animal rights philosophy. On the one hand animals are equal to humans. In fact, all animals are equal in existential worth to one another. On the other hand, many of those animals, not just humans, eat their fellows. To explain away this second element, the philosophy holds that humans are different because we can recognize that we are co-equal with the other animals, hence we should not eat, shear, ride, or otherwise in any way use our co-equals. But, if we're different because we can recognize this, then we're not co-equal with the other animals. We are, in at least that respect, superior to the other animals.

Which is not to say that there aren't valid points to be found in the animal rights movement. No

one should harm animals for their own amusement. Torture is torture, be the subject human or animal. Humans do have a tendency to over use resources, and with our population numbers being what they are, we could push too far to sustain ourselves, though that seems less a concern of animal rights than the abstract worth of the animals in and of themselves.

But animal rights misses another important thing, much akin to the prior conundrum. Every animal species pushes to the maximum of its abilities to dominate its environment. The only difference between humans and other animals in that regard is that we've been much more successful at dominating our environment. So much so that we may endanger ourselves, but no more or less morally superior than any other animal. Animal rights adheres to something of a moral superiority of other animals than humans because none of them have wiped us out, or pushed us to the verge of extinction. But some species have caused the extinction of other species. Extinction has occurred for as long as there's been life. That's evolution/natural selection.

The idea that humans are somehow removed from natural selection is a core element of animal rights, and much of environmentalism. The discussion usually revolves around a debate between what's "natural" and what's "human caused". It's a distincton without a difference. We're natural. We didn't just show up here one day and take over like some invasive species. Well, we didn't unless you believe in one of the vast number of religions that says we just poofed into existence from some deity's machinations. As an atheist, I don't.

Ah, enough of that digression. This was a good series in many ways. It made Animal Man into a character worth reading. It inspired a lot of debate. It told some good, if transient stories. It's certainly been worthwhile to me to read it again (or read it anew as far as the first 9 issues go). Funny enough, I think my favorite was issue 7, featuring the story of the Red Mask, a dying, broken down super villian with a death touch. It stood alone nicely, though it was part of the larger whole.

If you don't have any of these issues and want to read them, they're collected in three trades, so they should be easy to come by. Despite the less than satisfactory end, it'll challenge your thinking to some degree. Hell, at the very least you can see a lot of the ideas Morrison had floating around that would one day end up in 52.
Posted by Thomm at Sunday, February 22, 2009