Jim: When Lee jumps the selection gun, he always forgets to do an opening, so now I have to start and send it back to him.
Lee: You would think since I did all the picking a person might complain less! Sheesh. 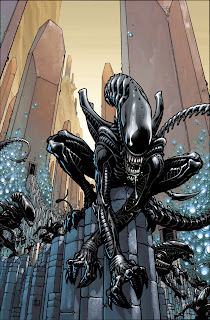 ALIENS #1 (of 4)
John Arcudi (W), Zach Howard (P/Cover), and Mark Irwin (I)
On sale May 27FC, 32 pages$3.50Miniseries
A group of wildcat planetary prospectors plant their flag on a distant new world, rich in land, resources . . . and mystery. Within this seemingly uninhabited planet lies the greatest archaeological discovery in history, an ancient, abandoned complex of impossible proportions carved deep within the living rock, a mind-numbing labyrinth of passages, ramps, bridges, and galleries that seems to extend limitlessly. But as the exploration of the leviathan dead city proceeds deeper and deeper, the members of the team slowly begin to lose their grip on reality. But madness gives way to fear as the explorers begin to disappear one by one. Something else lives within the necropolis, a faceless horror as deadly and merciless as space itself, a lethal terror that has waited centuries to awake . . . and destroy.
At long last, Dark Horse Comics heralds the return of the heavyweight champion of modern science-fiction/horror, Aliens!
* Aliens #1 is the first act in the relaunch of all three classic Dark Horse/Fox comics series. The release of Aliens #1 will coincide with the thirtieth anniversary of the Ridley Scott-helmed film masterpiece, Alien, and will be preceded by an Aliens/Predator special for Free Comic Book Day!
Lee: Cool! There are new Alien series being developed. I always liked these minis and have enjoyed them in DH’s new omnibus format.
Jim: Usually I pick the Dark Horse stuff, but Lee got giddy this month and jumped the gun. Surprisingly the Aliens comics that I have gotten have been entertaining, I’m just never sure why.
Lee: It’s cool because it has big, creepy, crawly monsters. What’s not to like about that?
Jim: Usually with the same plot over and over and over again. 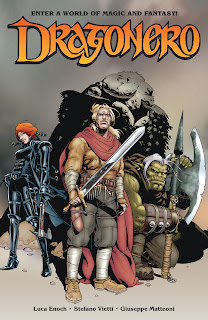 DRAGONERO
Luca Enoch (W), Stefano Vietti (W), and Giuseppe Matteoni (A)
On sale June 10b&w, 296 pages$19.95TPB, 6 1/4" x 8 1/4"
Beyond the civilized lands of Erondar, the Stone Towers are crumbling. The great monoliths are falling one after another under the wild thrusts of an evil force. The Ancient Prohibition that binds the Abominables inside their dark world is soon to be broken.
Alben the Wizard knows what must be done. He will send for Myrva, a young follower of the powerful Technocrats; he will choose Ecuba, the fighting nun, to protect him; and he will call back Ian Aranill, a former Empire officer--followed by Gmor the Orc, his loyal friend--to use his scouting experience.
Together they will face the Painers, the evil beings who still live in the barren Dragonlands. Can Ian prevail against the last, horrible threat they will be facing?
* Dragonero is a brand-new stand-alone graphic novel in the spirit of Lord of the Rings and The Chronicles of Narnia.
* Dragonero is published in conjunction with Bonelli Comics, publishers of such hit series as Dylan Dog and Martin Mystery, also available from Dark Horse.
Lee: This looks like your basic European sword and sorcery epic to me. I don’t know the writers but Matteoni has a nice artistic style so it will be pretty. I imagine it will be good if you’re interested in that type of thing.
Jim: The art does look good, but this is not my type of thing. 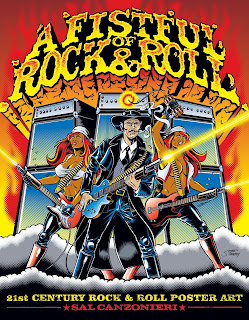 FISTFUL OF ROCK & ROLL: 21ST CENTURY ROCK POSTER ART
Sal Canzonieri (W) and Various (A)
On sale June 10FC, 400 pages$29.95TPB, 8 1/2" x 11"
Hot on the hellish heels of Sal Canzonieri's Electric Frankenstein! High Energy Punk Rock & Roll Poster Art comes an even more blasphemous blast of raw poster power, A Fistful of Rock & Roll: 21st Century Rock & Roll Poster Art. A brain-frying collection nearly as big as a Marshall stack, A Fistful of Rock & Roll is an up-to-the-minute cross-section of today's booming rock-poster scene, showcasing hundreds of works by top poster artists from every dive, hellhole, dungeon, and landfill from sea to shining sea, creating a deafening visual tribute to just about every goddamn cool band you can imagine!
* Fistful of Rock & Roll includes posters from some of the top live rock acts in the history of popular music, including The Cramps, The Hives, Iggy Pop, Velvet Revolver, James Brown, Ministry, High on Fire, Misfits, Motorhead, Ramones, Rob Zombie, and hundreds more!
* Fistful of Rock & Roll features poster art and other graven images from a virtual who's-who of the rock art scene, including Johnny Ace, Mark Arminski, R. Black, Guy Burwell, Steven Cerio, Art Chantry, Brian Ewing, Alan Forbes, Derek Hess, Gilbert Hernandez, Lindsay Kuhn, Bob Masse, Tara McPherson, Shepard Fairey, Print Mafia, and Stainboy, to name but a few.
* Includes forewords by underground cartoonist/poster-art legend The Mad Peck and modern psychedelic-art superstar Steven Cerio.
Lee: I know this is a pure art book but it’s such a cool art book. Rock posters are, and always have been, super cool. I image every teenager, in almost every generation had rock posters on their walls at some point in time. The more I write about it, the more I like it, and the more likely it is to come home!
Jim: Please, this is an easy pass. I love music and rock n’ roll, but not enough to care about this product.
Lee: How can you not like this? Especially with the OBVIOUS connection between music and comics, this becomes a no-brainer.
Jim: Exactly proving that Lee has no brain. 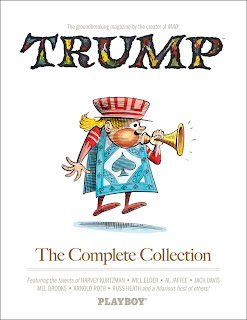 PLAYBOY'S TRUMP! THE COMPLETE COLLECTION
Harvey Kurtzman (W/A) and Various (W/A)
On sale June 17FC, 144 pages$19.95TPB, 8 1/2" x 11"
Launched in January 1957 by Harvey Kurtzman and Playboy publisher Hugh Hefner, Trump partnered Kurtzman with many of his "usual gang of idiots" from his time at Mad--famous humor artists such as Jack Davis, Al Jaffee, and Wally Wood. They were joined by such dynamic humorists as Arnold Roth, comedians Mel Brooks and Doodles Weaver, and TV writer and novelist Max Shulman (creator of the character Dobie Gillis, who appeared in dozens of stories, a movie, and the popular TV series The Many Loves of Dobie Gillis). Though it lasted only two issues, this first effort after Kurtzman's historic split from Mad was the breeding ground for the magazines Humbug and Help!--and would ultimately lead to the more than thirty-year run of Kurtzman and Will Elder's landmark character Little Annie Fanny in the pages of Playboy magazine.
* Trump! reprints the only two issues of the magazine, released in January and March of 1957.
* Trump! features the contributions of the following artists and writers: Harvey Kurtzman, Harry Chester, Jack Davis, Will Elder, Al Jaffee, Wally Wood, Arnold Roth, Russ Heath, Mel Brooks, Doodles Weaver, Max Shulman, and many others.
Lee: And this I am really, really torn on. On one hand, the collection of artists is probably the best since EC’s hay days in the early 50’s, and that alone is worth the price. On the other hand, I’m not sure the satire and humor will be anywhere near as funny today as it was then. It’s one thing to read bad Golden Age superheroes, but it’s entirely something else to read books that are no longer funny.
Jim: Just for the sheer history of this book it maybe worth the $20, but Lee is correct often biting satire is only biting for the time it was created for. 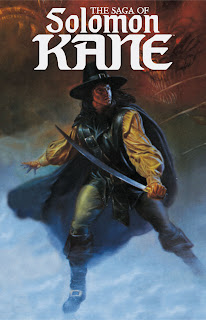 THE SAGA OF SOLOMON KANE
Robert E. Howard (W), Roy Thomas (W), Don Glut (W), David Wenzel (P), Howard Chaykin (P), Alan Weiss (P), Steve Carr (P), Neal Adams (I), Al Williamson (I), Bill Wray (I), and others
On sale June 3b&w, 416 pages$19.95TPB, 6 5/8" x 10 3/16"
From his pulp-fiction origins in Weird Tales to his latest Dark Horse incarnation, Robert E. Howard's sixteenth-century Puritan adventurer has captured the imaginations of readers for decades. Now all of the Savage Sword of Conan short stories from the 1970s are collected for the first time: equal parts comics adaptations of Howard's formative tales and inspired new chapters from venerable scribes Roy Thomas (Conan the Barbarian) and Don Glut (Kull the Destroyer)! Follow along Kane's restless travels with pistol and rapier as he is compelled to be a weapon of God, ridding the world of evil wherever it may be found--from the jungles of Africa to the high seas, and whether cannibal, demon, vampire, or pirate!
* A fantastic companion volume to Dark Horse's best-selling Savage Sword of Conan omnibus series!
* Contains short stories from various Savage Sword of Conan and Conan Saga issues, and from Kull and the Barbarians #2 and #3, Marvel Preview #19, Monsters Unleashed, and Dracula Lives.
Lee: I never expected this. I can see the appeal of the Savage Sword Conan Essentials but Solomon Kane? Is there a market? Actually, since I own some of the original magazines the stories were published in, I could just look and see if they are worth getting. But, based on the list of artists, I’ll probably take a chance anyway.
Jim: Half of the great artists are the inkers on this project and this is a book I can easily pass on. I have plenty of Conan material the new Solomon Kane mini-series is okay, but this is nothing I would ever get around to reading. 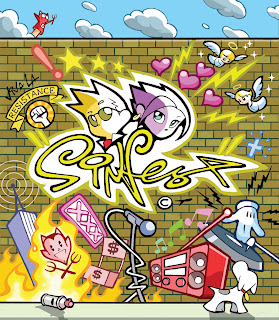 SINFEST VOLUME 1
Tatsuya Ishida (W/A)
On sale June 17b&w, 208 pages$14.95TPB, 8 1/4" x 9 3/4"
AT LAST! "The webcomic to end all webcomics" has landed at Dark Horse, and we're starting the collections at the beginning! Sinfest is one of the most-read and longest-running webcomics out there, and explores religion, advertising, sex, and politics in a way fleen.com calls "both brutally funny and devastatingly on-target." In an era when most syndicated newspaper strips are watered down and uninspired, creator Tatsuya Ishida draws on influences ranging from Calvin and Hobbes and Peanuts to manga and pop culture to bring us a breath of fresh air. If your comic-strip craving hasn't been satisfied since the nineties, deliverance is finally at hand.
* The first volume of Sinfest collects the first six hundred Sinfest strips, introducing the full cast of characters and the opening installments of Ninja Theatre(TM), beat poetry, calligraphy lessons, and the irresistible Pooch & Percival strips.
* Web traffic on Sinfest.net averages 1.7 million unique visitors per month and 300,000 page hits per day.
* "After seven years and counting, Tatsuya Ishida shows every indication of maturing into a cartoonist on the level of Bill Watterson and Walt Kelly."--The Comics Journal, "50 Excellent Comics from 2007"
Lee: Upon reading this, I went and read the web comic for a little bit. It reminds me a lot of early Liberty Meadows by Cho. I like strips so I’ll probably take a chance on this.
Jim: Lee has been sending me the link to the strip on a daily basis and I’m totally sold on this collection. Some very funny stuff and the creator is not afraid to touch on any subject. You have to go and read some of this work.


Jim: Well Dark Horse has a short month for our selections, but they have plenty of good stuff ongoing with BPRD, Conan, Creepy Archives and more. I highly recommend you check out the link to Sinfest and read a month’s worth of strips, it goes from sacrilegious to almost too cute at times when his pets are the focus.
Lee: I agree. I picked great stuff!
Posted by Jim at Thursday, February 05, 2009