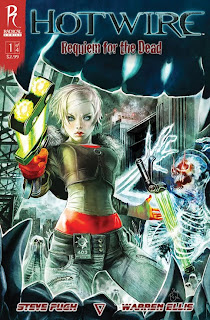 Every time I sit down to a read a new Radical Comics series I always wonder will this be the one that I don’t like it and it has yet to happen. In fact often I think that every new series is better then the last, but that is more the newness factor talking then anything else. Right now City of Dust, Shrapnel and now Hotwire are all series coming out from Radical and each one has a lot to offer.

Before I jump into the stunning artwork and the very cool story, let’s just talk quality of production. Radical never, NEVER, puts out an inferior product or puts out something with a price tag that makes you feel like you got taken to the cleaners. You are always getting high grade paper, high grade product, solid professional work and color that jumps off each and every page. Let’s face it some small press publishers are producing work that appears to have been produced by second graders others have people at the beginning of their careers learning the ropes, still other are often are ill financed and you have no clue if you will every see issue of a mini-series. Radical is a company that you can invest in and have trust that the product will be well done and if you like you will get the whole series. It makes a lot of difference as even many Image series just disappear and you may never see the end of the series.

Hotwire itself is a great series. Steve Pugh is an artist whose name I see in the business from time to time and he falls off the comic radar and then re-appears. Well he is back and apparently this project has floated around for awhile and now Steve is finally bringing it to life and he has purported to rewritten some of the story by Warren Ellis, but you can feel Ellis’ fingerprints all over the story as the high concepts are all Warren.

The story itself is about an attractive young lady who is a cop who works with ghosts. Her official job is detective exorcist as the dead stop departing about 50 years ago and the ghosts’ energy (blue light) can often create problems. At the same time technology has been created to be able to suppress the ghosts. Apparently someone is messing with the suppressors to create problems and Alice is trying to find out who is behind it. At the same time she is involved in a situation where she is suspected of being an informant against other police officers, which makes her persona non-grata at work. She recruits an officer who is basically suspended due to an ancillary issue as she needs him because ghost detectives are not allowed weapons. She and Detective Mobey find out someone is building a ghost bomb.

The above summary does not do the book justice as I’m trying to condense a book that has a lot going on in the first issue. What makes the book work is that by the end of issue #1, you know the major players, have seen some terrific action sequences and have a feel for the futuristic setting of the series. So many first issues leave you with questions on many of those points, but with this book you are wondering who is creating ghost bombs and why, not what is going on.

Finally the art itself is really well done, from page design, camera angles, to layouts and pacing it is a pretty book. The art style is in the photo realistic class, but I’m not guessing who he used as templates for his characters, and it has a cinematic feel to it as most Radcial comics have.

Overall Grade A – Ghosts, a gorgeous woman, brilliant action, high concepts all mix to make this another winner from Radical.