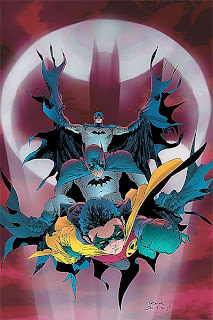 Format 32 pages of story and art

This is why I love Grant Morrison and at the same time after reading this I can see this is why some people either dislike Morrison or can’t understand what the heck is going on. In this extra size issue we get the return of Bruce Wayne, explanations of who Dr. Hurt is and where he comes from, we see Dick, Damian and Bruce all in heroic action. We see Batman rescue Alfred, the Joker take out Dr. Hurt and the launching of Batman Incorporated.

It is a maniacal ride with artwork by Cameron Stewart, Chris Burnham (who I never heard of) and Frazer Irving. What a clash in art styles from the beginning of the book to the end of the book. The pace of the book is furious, Bruce appears with no explanation and the action starts and never stops. I almost get the feeling Grant wrapped this up a little quick, but maybe there has been pressure to get things to closure. It also is confusing since we have not seen the end of the Return of Bruce Wayne and there is no mention of what the heck the whole Insider costume was from the Road Home series. Often I wonder if Grant is letting people at DC know what he is doing or not. Not sure if anyone will every tie it all together, but Grant’s run on Batman sure ties together. I believe that every issue done by Grant all leads up to this issue. I also feel like it was a book where Grant had so much to say that it almost came spewing out like a volcano.

I have been buying the trades and hard covers of this series because I want to sit down and read this opus as a complete thing, of course I have many trade and books sitting on my shelves that I want to re-read one day. I will go back to Grant’s X-Men run that I did read as a complete set over a short period of time. While it was coming out in singles I got lost trying to following all the threads of what he was doing, read as a whole it was a beautiful thing. Of course the rotating cast of artists he ends up with hurts the rhythm at times but as a whole it works. Comics are a periodical business and often as single issue Grant’s work fails and I think that is a problem to some extent. While each individual issue does not always need to stand on its own the explanation of how things fit can’t be spread over too long a time or the reader will lose the thread. I’m sure I’m missing some of what is going on here with this issue.

Overall though the entire story came together and if Grant walked away from Batman now I think he would have reinvigorated the entire Batman line. Based on what Grant has started DC has built the Batman line of books into the biggest segment of their comic publishing scheme and I’ll be damned if I’m not hooked on most of the books.

I still have strong reservations about Grant’s next phase of Bruce making Batman into a franchise (how much does the franchisee have to pay?), but after reading this issue I’m willing to go aboard for a few issues to let him sell me on the concept.

I love that Batman is the talk of the “comic town” a lot of times right now. Most of the cape and cowl set have been blah, boring and treading water, Batman is the exception, love or hate it, the book is generating a buzz, me – I love it.