Seems like just yesterday that I wrote about the Geoff Johns run on JSA, but it was more than 10 months now. Since then I've read the 2 issue Jerry Ordway arc and the 12 issue Bill Willingham run of 3 arcs. After that I gave up on JSA, primarily because it was back to crossover time with the JLA and Brightest Day, which had no interest for me. Even though I like some of what James Robinson has written, I'm not getting into the overblown crossover bit anytime soon.
So, the 14 issues at hand. Ordway's two issues harkened back to my childhood. It was succinct. It was simple. It was passable. The opponent in the story

was Kung, a Japanese obake (shape-shifter) and assassin from WWII. He had been captured toward the end of the war and convinced by the Americans that it would be in everyone's interest to end the war before the nuclear bomb was dropped. He returned to Japan to convince Emperor Hirohito, it seems from this story. He was in Hiroshima, though, when the first bomb was dropped. He and all the other pissed off Japanese who were killed have been hanging around in some sort of limbo. Having escaped and funneled all their rage through Kung, they've captured Flash, Green Lantern, Wildcat (the original), Liberty Belle and Hourman, transporting them in time and space to Hiroshima on August 6, 1945. The latter two weren't even alive back then, but their parents were operating under the same guise. The Spectre ends up involved and Kung is defeated, with a little bit of himself that he'd hidden in Stargirl being found out and removed before the whole thing comes to an end.
The reason Kung's going after the 5 JSA members is that he thinks they were obligated to convince Truman to hold off on dropping the bomb while he convinced Hirohito to surrender. Considering Hirohito was nothing more than a figurehead for the military lead by Tojo that actually ran the show, he could have talked to Hirohito for years and not gotten any closer to Japan surrendering. Beyond that, I find the motivation for the dead's anger to be weak. Time's passage isn't the issue. Why would they be mad at the JSA in the first place? Why not be mad at the people who actually made the decision and dropped the bomb? Ok, rationality is optional for humans, as so aptly shown by the Know Nothings, but still...
At the end of this arc we're pretty much where we started, but for Atom Smasher telling Stargirl he loves her like a sister, not like a girlfriend. Both of them know it's not true and that he's only saying it because she's a minor, but it was a move forward in story.
Willingham takes over with issue 29. Matthew Sturges co-writes through the first arc's end with issue 33. The very start of this arc has Obsidian reduced to a large black egg, and no one knows how that happened. We also have two new young trainees, King Chimera and All-American Kid. The latter is supposed to be a relative of the original, who was a short lived (because he was killed on a mission) sidekick to the original Mr America in WWII. The former is able to cast

illusions by bending sound and light and comes from mysterious training. He's also rather imperious.
While the team's out fighting a large group of mercenaries who were hired to take them down, the two trainees are left behind with Mr Terrific. The All-American Kid stabs Mr Terrific, repeatedly. While out on the mission the team engages in as much civil war as it does in combat with the mercenaries. The fight is about what kind of team they are, quasi-military or casual family. The former camp is lead by Magog and the latter by Green Lantern. In the midst of all that, there's the mystery of why the mercenaries aren't allowed to attack Stargirl.
The mercenaries are eventually beaten, All-American Kid is revealed to really be Kid Karneval, and Mr Terrific nearly dies. Best of all, though, the JSA All-stars are formed. This was great because, other than Hourman and Stargirl, I really couldn't stand the other characters who left with Magog. Those were King Chimera, Damage, Power Girl, Wildcat (the new one), Judomaster, Steel, and Cyclone. This made the JSA book much more workable and left only characters I liked. Removing Magog alone would have been an improvement.

The next arc was a two issue battle with Mordru that was mostly amusing. The new Dr Fate was at the forefront, and the end result, other than the defeat of Mordru, was some insight for this Dr Fate into his helmet's powers. As a result, he went off to another dimension for some additional training. That took him out of the loop for the next story arc, which would have died aborning if he were around. The story itself was fun and clever, with each JSA member sent into a box dimension to face specially tailored threats, though some were far more effective than others.

The final Willingham arc was the most turbulent. It jumped 20 years into the future where Nazi

s have taken over the US and much of the Western Hemisphere. The whole thing happens because it was Kid Karneval, who's still a captive initially, who turned Obsidian into the black egg. This egg is used to power a device that can take away all super powers, whether mystical, scientific or genetic. The Nazis in the future primarily use it in a limited area to keep the superheroes, and some villains, safely ensconsed in a prison camp, but they occasionally expand it over the whole planet, such as when they tricked the Green Lanterns into attacking, only to turn the nullifier on, causing the Green Lanterns to fall to their deaths.

The super Nazi team that gets all this started is lead by Captain Nazi, at first, and is further composed of Kid Karneval (who ends up being the supreme leader in the future), Hunter, White Dragon, Shadow of War, Green Ghoul, Count Berlin, Captain Swastika, Captain Murder, Baron Getapo, and Dr Demon. Like the JSA pre-split of the JSA-Allstars, this team is far too big to have any idea about most of them. Only Captain Nazi, Baroness Blitzkreig, and Shadow of War have any kind of character development. Hell, I couldn't even tell you what the powers of Captain Swastika, Captain Murder, Baron Getapo, Count Berlin or Dr Demon might be. Some of the names are downright confusing. Dr Demon doesn't appear in the least demonic. She looks like a cyborg. In fact, Count Berlin's the one who looks like a demon. At least Green Ghoul looks like a ghoul. Captain Swastika seems doubly redundant, being that he wields a blade like Hunter but bears a goofy name like Captain Nazi. By far the dumbest name has to be Captain Murder, though. Some girl whose tights only have one leg and who wears gauntlets. Big deal. What's she murdering, good taste? Why does murder need a rank? Are there a squad of murders that are her subordinates? It smells of running out of name ideas.
This being a future that will never happen, lots of people are killed off. Green Lantern dies right

away when the nullifier's turned on. Superman loses an eye. Others have been killed over the years in show executions. Mr Terrific is posing as a traitor who's providing information to the Nazis, which gets him access to what they're doing when he drugs his interrogator and uses her computer. He also has easier access to supplies that let him create weapons for the others and devise a plan to gain access to the nullifier so that he can send a message to the past to prevent all this from happening. In one of the final steps of the plan Blue Beetle (the current one) attacks Mr Terrific as a traitor during a state visit by Kid Karneval, beating Mr Terrific savagely so that Mr Terrific will be taken to the infirmary. This is done knowing that Blue Beetle will be executed, but Mr Terrrific's interrogator is also killed by Karneval because she failed to adequately protect Mr Terrrific.

The plan proceeds and Mr Terrific gets a message to himself at the time after he's been stabbed by Kid Karneval and is on the operating table. He manages to tell Green Lantern how to break Obsidian free of the egg status, which totally defeats the Nazi plan.
What's interesting is that this not only retcons the Nazi takeover but everything that's happened since Ordway's two issues. Willingham did a Dallas. He took the entire preceding year's writing, which he did, and just wiped it out. Instead of being an egg and out of action, he takes part in fighting the mercenaries and Mordru, as well as the Nazi super team. That all seems to go much more easily with Obsidian involved. This is a major change from him just hiding in the brownstone and providing security, as he had been during the Johns run.
There are several logic problems involved here. Despite the greater ease with which the mercenaries are defeated, the JSA All-stars still split off into their own team. Why? What were they fighting over that they split? It could be the same issues of the direction to go with the team, but it's all rather vague now. Then there's the issue of why the mercenaries wouldn't attack Stargirl. I suppose that could have been picked up in JSA All-stars, but that's never resolved in the original stories or the retcon. What happens with Stargirl and Atom Smasher? Is there separation at the end of Ordway's stories still intact, or does that change with the retcon, too?
I suppose I'll never find out. I'll live. 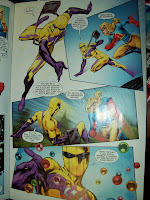 The most glaring error, though, is one of physics. In the original attack by the super Nazis Baroness Blitzkreig runs in front of Liberty Belle, who's traveling in super speed mode herself, and drops a handful of superballs into Liberty Belle's path. These balls, because they're traveling at such high velocity, cause serious damage to Liberty Belle, taking her out of the fight. In the retcon, Mr Terrific lets everyone know the strategy the Nazis will employ, so Green Lantern grabs up the super balls before t 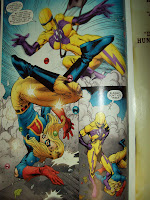 In the end, it felt like there should have been more that Willingham had to tell but the whole thing came to screeching halt to get involved with Brightest Day. It was no Fables, and I don't suppose it could be in the DCU. Another reminder of why reading Vertigo is more enjoyable, more consistently. Hell, the covers of issues 29 and 40 alone tell you how unstable things are in the DCU. Granted, the verbiage and art on 40 ape that of 29, but it's less of a new beginning than it is a deletion of a year. The only thing I can say that's new going forward is that Mr Terrific is dating the mother of his Nazi interrogator from the future, which given his knowledge of that future has to be more than a little strange.
Posted by Thomm at Sunday, November 14, 2010