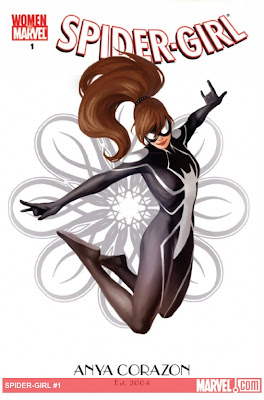 Format:
main-story -- 23 pages of story and art plus 1 recap page

In the interest of "going green" and "redeeming the time", I'm going to adhere to two of the three R's and Reuse and Recycle the letter I just sent off to Marvel about Spider-Girl #1 for this review. As you will see I'm very passionate about my Spider-Girl comics...

This past summer just before leaving on a two-week family vacation out west, I secured an interview with Paul Tobin for the blog: Comics And...Other Imaginary Tales, because I was so enthusiastic about his work on Marvel Adventures Super-Heroes! (BEST Avengers title on the stands PERIOD!!!) By the time I got back and began preparing questions for him, the news about this "all-new, all-different" Spider-Girl series had been announced. As a May "Mayday" Parker Spider-Girl fan from the beginning (since What-If #105), I was NOT pleased that someone else would be using the Spider-Girl name. Still, I asked Paul about the upcoming series and if he had anything to say to May's fans that might make them try it. Based on his responses, I promised him that I would at least buy issue one and give it a fair shot, instead of boycotting it like I had planned.

Two days ago, I kept my promise and yesterday morning I finally got to read the issue. I ABSOLUTELY LOVED IT!!! The art (including the coloring and lettering) is phenomenal! For example, the page where Anya and her Dad move the couch is so natural and authentic. (Great couch upholstery by the way.) I immediately connected with them and I'm very concerned about her Dad's condition at the end of this issue. HE BETTER NOT BE DEAD!!! See, I care already.

Oh, and NO ONE writes the Invisible Woman better than Paul Tobin. I totally dig his Captain America-flirting Sue in Super Heroes, which is quite a departure from the family Sue in FF, but he writes her perfectly every time. The whole "going out to lunch" sequence was awesome. Making a conversation interesting is no small feat, but it's almost like watching a film the way Clayton masterfully changes the "camera" angles in each panel. The perspective is always spot-on too. Even when there aren't any backgrounds, Chris really enhances the scene with his superb colors. This is a team supreme for sure!

I do have some questions about Spider-Girl's costume. How does her web-swinging work anyway? Is the rope contained in the spider-shells on the back of her hands? It looks more mechanical than Spidey's webbing, but there must be a way to reproduce it or how could she tie up bad guys and still web-swing. I know you guys have a logical explanation -- let's see a pin-up schematic sometime.

The backup story was great too. Dean's art and Edgar's colors were wonderful and fit the story's tone to perfection. I love their lumpy Thing and the way Mr. Fantastic stretched across the floor when he fell from the water bubble. I think it's cool for Anya to have such a strong connection with the FF, since Spidey encountered them so early in his career.

Excellent job everybody! You're doing the Spider-Girl name proud!!! I think that's the highest praise I can give.

PS. I STILL want Mayday to get her own series again, but I can support two Spider-Girls. I just wonder which one Disney will want to use in a TV show.

PPS. While I've got your attention...PLEASE SAVE THOR MIGHTY AVENGER!!! It's my favorite Marvel comic being published right now!
If you think you're surprised at my gushing reaction, imagine how I felt. (I sure hope they print my letter.) Oh, I liked the preview in Amazing Spider-man #648 too (A BIG TIME thanks to Cosmic for my coupon that allowed me to get it for FREE!). Wow, I'm back on the monthly Spider-man bandwagon after SIX YEARS and I'm supporting an Arana comic book. Hell's never going to freeze over (and it won't be the "party time" that AC/DC sang about either), but I certainly didn't expect this to happen...

Grade A+: Worthy of the name "Spider-Girl"!!! A wonderful, easily accessible start to the new series with realistic dialogue, great characterization, and astounding artwork with splendid layouts. Everyone should add this to their pull list!
Posted by Matthew at Saturday, November 20, 2010