A few months ago Lee didn't know who might by this, the Flesk version collecting all 14 issues of Mark Schultz's Xenozoic Tales. Well, here I am. The thing is, even though it's been published several times previously by other publishers, I hadn't seen any of those. And this is a lovely 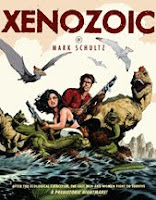 version. Plus, from what I've read, none of the other collections had all the issues that this one does.
Patience is one of my things. It's also required for a fan of this work. I started reading Xenozoic Tales in its original single issue format, starting with its appearance in Death Rattle #8 in 1986. I then got various of the 14 issues, but unfortunately not all. Publication was generously described as erratic, which meant it was 1994 by the time the 14th issue came out. By then I had gone from a college sophomore to a working drudge with a law degree and a wife. I never knew if there was an ending to the story because it was mostly the later issues that I missed.
Guess what? There isn't an ending to the story. Sometimes that's a writer's choice, leaving things open ended. That's not what this feels like. It feels like Schultz just didn't finish it.
Here's the story that there is. In the late 20th, early 21st Century humanity moved to living

underground because the surface became uninhabitable due to pollution. This wasn't just a toxic morass but also increased natural disasters triggered by pollution. This was fairly insightful in 1986. Global Warming had not been presented as an impending issue at that time, but that's a lot of what the disaster was.
Anyway, about 500 years later, humanity came back out of its caves only to discover that something had been triggered while they were gone. Latitudes as far north as NYC were now tropical. Sea level was much higher. The remnants of NYC are half submerged, fully submerged if not among the taller buildings. Most noticably, once extinct species are now dominant. Not just the dinosaurs but also mammoths and other long gone mammals. There are new species, too. The secretive Grith are the most notable. These are humanoid lizards who don't speak but can communicate with humans, if they so choose, via Scrabble tiles. They are telepathic amongst themselves and other lizards.
Into that setting we find Hannah Dundee, an ambassador from the Wassoon community that lives in the swamps. She's coming to the City in the Sea (the submerged NYC), ostensibly to improve trade relations and to seek some cessation of Jack Tenrec chasing undesirables into Wassoon territory. In fact, her arrival at the City in the Sea is almost the moment of her death at the hands of poachers who want to kill her.

Jack Tenrec is a mechanic in the City in the Sea, though he doesn't actually live in the city. He lives across a bay in a huge garage where he restores 1950s era cars, particularly Cadillacs, and makes them operable on fuel derived from dinosaur guano. Jack's role isn't simply devising and restoring mechanisms, though. Mechanics in this culture are keepers of the faith, almost shamans. Their role is to remind the people of the decisions of their ancestors that lead to the disasters that drove them underground. They are also the ones the Grith most often choose to communicate with amongst humans.
This post apocolyptic future merely provides a back drop for Schultz to tell stories. Really great stories. Each issue is largely a complete story in itself with underlying themes that continue to run forward into other stories. When it starts, Jack is an influential man in the City in the Sea, though his influence is both feared and the subject of jealousy for many members of the ruling counsel of governors. The counsel are made of representatives of different segments of society, akin to a gathering of guild leaders. Function is the determining social glue, not race or ethnicity. Hannah is trying to learn more information about how the cataclysm occurred, which she thinks she can find in a vast library that's slowly being recovered from its watery fate. This library is closely guarded by the City in the Sea. No outsider has ever been permitted to enter, but Hannah manages to do so, with some assistance from Jack. Jack had saved her from the poachers on her arrival and she allied herself to him quickly.
A romantic relationship develops between them, which is only hinted at through most of the tales. In fact, there's a more noticable animosity between them in the early stories, with the romance being more subtle. Eventually Schultz reaches an issue where he flashes back in time to just before the cataclysm. It's revealed that there's a substance that was part of an experiment that likely caused the explosion of species that occurred after the humans retreated underground. In fact, the issue in question centers around the discovery of some of this substance and its escape into a nearby lake. The scientists monitor and try to isolate it but despite their efforts a new niche o

f life develops at an exponential rate. Jack and Hannah are there, trying to contain the substance with the scientists. This is the first issue where it's directly shown that they're spending time between the sheets together.
Unfortunately for Jack and Hannah, a segment of underground workers who've been the primary workers on pumping water out of the buildings to recover books and other items have developed a philosophy that the mechanics are holding humanity back and that nature needs to be exploited more to the benefit of humanity. As a result of some nefarious, and criminal, actions, as well as some deals with other counsel members, a new counsel member named Scharnhorst takes control. She promptly has Jack seized but in the confusion, Hannah escapes, as does another ally of Jack named Mustapha Cairo.
Hannah, and Jack's one ally on the counsel, Governor Dahlgren, effect his escape. Dahlgren continues on the counsel, appearing to go along with Scharnhorst, while Cairo begins a guerilla campaign to stop Scharnhorst and the counsel from reigniting another cataclysm. Meanwhile, Jack and Hannah escape to Wassoon. There they run into royal court machinations, including an ex-boyfriend of Hannah. This, unfortunately, is where things end. Wassoon is plotting to help Jack return to the City in the Sea and some level of power that would allow them access to the books therein.
It's unbelievable how much story Schultz packed into one teaser in Death Rattle #8 and 14 single issues. The synopsis here only touches on the surface. There's so much character developed, as well as individual stories of minor characters who haven't even been mentioned. In fact, several of the story devices use the story of a minor character, such as Remfro Rynchus, to advance the larger story of intrigue.

Schultz also is able to develop strong characters of both genders. In addition to Hannah, Governor Dahlgren and Governor Scharnhorst are pimary female characters with strong personalities, even when only sketched in short appearances. With Dahlgren there's a clear past of romantic relationship with Jack to complicate matters with Hannah. On the male side, Mustapha Cairo is the most oft mentioned, though Governor Nock is also well developed. Each character is not only well drawn in pen and ink but well drawn in character. Individual physical traits are expressed in both movement and behavior.
Would that there were more. But I'll be patient. My patience was rewarded with this collection. Perhaps more patience will bring at least a few more issues to further the tale to a concluding point.
Still, I recommend this tome. There's a nice introduction by Craig Elliott and a foreward by Schultz, as well as some new drawings by Schultz. It's also in the original black and white, not the colored version that came out under the name Cadillacs and Dinosaurs. It's comics and not movies, but it always seemed a bit wrong to read the stories in color.
Posted by Thomm at Sunday, November 28, 2010