Batman The Return - A Review 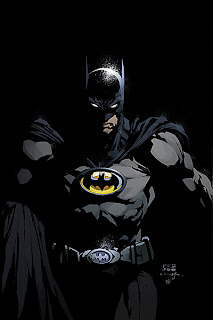 Batman The Return
Publisher DC
Writer Grant Morrison
Pencils David Finch
Inks Batt & Ryan
Colors Peter Steigerwald
Format 30 Pages of Story and Art 15 Pages of Back Matter
Price $5
Batman The Return was excellent. I thought the art was outstanding and the best work I have ever seen from Finch, great inking and a coloring process that knocked my socks off. It had an almost flat sheen to it that could be attributed to the paper as well as the coloring. All in all the effect was to create a drop dead gorgeous book and one that set the tone for the next phase of Batman. It just left me wanting more and we were lucky as Batman Inc. #1 was also out this week.
I thought the story telling was just as fantastic as the artwork. Number one for fans that dislike Morrison’s more esoteric work, this was a pretty straight forward read. The opening sequence that re-tells the origin of Bruce Wayne choosing a Bat for his symbol was spot on and a thing of beauty. It took that moment and made it special all over again.
From there we jump into Bruce’s newest adventure and his plans for the entire Bat crew specifically some nice touches with Oracle and Batgirl that I hope will be part of their stories going forward. We also get Bruce and Damian in action as Batman and Robin as Bruce is dealing with a menace known as Leviathan. The book just moves and tells more story in the span of this one issue then many books tell in the span of six issues or more. There is no mystery, Batman wants to fight crime worldwide and Dick, Tim, Damian, Stephanie and Barbara are the front line of an army he wants to build. Bruce is confident, driven and yet more accessible and open than ever before. The impact of what happen to Bruce appears to have made a profound change in him and made him appreciate those around more than before.
The one thing I did find odd is this does not related to the Return of Bruce Wayne cross-over in what DC did at all. I’m reminded of Grant talking about Countdown and how DC never really consulted him with what he was doing. It appears that this is the case with the Return of Bruce Wayne also. I get the impression Grant passes on an outline and some basic ideas of how he is taking the character and then DC assumes this is going to be how it is done and runs with some idea and never calls Grant to see if it ties in. From Countdown to Battle for the Cowl and Return of Bruce Wayne it is obvious that Grant is going where he wants and DC tries to make something out of what he is doing without making Grant a part of it. The Outsider costume came from nowhere, but looks a little like the suit Bruce was in when he came back into his own time. As I said from this outside viewpoint it appears like DC wants to build off Grant’s work, but never consults him or maybe Grant does not want to be bothered. Either way it comes off as very poor planning on DC’s part and looks stupid at times.
Then Grant does what he was going to do and I put what the rest of DC in the rear view mirror and move forward. It is a little disconcerting as I’m not sure if what Grant throws out for Oracle and Batgirl will be picked up on or not.
After reading this I read Batman Inc., which did not have the same strength of artwork, but it was another winning story and one that I will comment on in Tuesday’s normal week in review.
The bottom line is run to your nearest store and read Batman The Return a terrific book that sets the next phase of Bruce Wayne’s career in motion and gives me what I wanted leaving Dick as Gotham’s Batman.
Posted by Jim at Wednesday, November 17, 2010