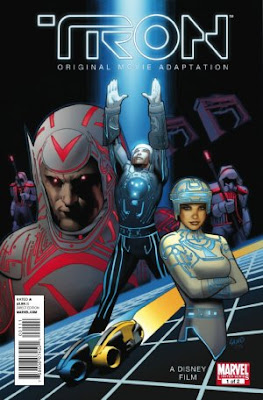 A few weeks ago I reviewed part 1 of the prequel to the upcoming TRON: Legacy movie due in theaters in a little over a month. At the end I wondered if the upcoming original movie adaptation was going to be any good. Well, it finally came out this week and I have some mixed feelings about it.

For the most part I enjoyed the book, but I think that was primarily because I enjoy the TRON story in general. The art by Mirco Pierfederici was more than satisfactory, especially when you consider the artist did everything: pencils, inks, and colors. His style seemed similar to Daniel Acuna, but just not as experienced.

Apparently they weren't allowed to use any of the actors' actual likenesses, which made the book look a little too generic. It didn't help that it seemed like the clothing styles (including Alan's [TRON's user] glasses) were updated to match the styles of today rather than the 1982 era. Most of the book looked like it was just redrawn scenes from the movie.

Now when Al Williamson did the Empire Strikes Back adaptation, he clearly must have used movie stills to base some of his panels, but he used those images to enhance his broader storytelling. The art in this adaptation really didn't add anything to the story, in fact it just was a clipped version of the movie. Why pay someone to draw this at all, when you could just as easily constructed a Fotonovel from the actual movie pictures? I loved the old Star Trek fotonovels and I even have a Close Encounters one too. It's basically a comic book using the pictures instead of drawings, but you can crop the pictures and size them to make the page layout more interesting.

Now, the script for this issue was written by Peter David. I think he should have been listed as the caption writer instead, because ALL of the dialog was taken verbatim directly from the film. I know because I watched it again recently. I'm okay with that, because it "sounded" just like the movie, which is what I wanted to read. Incidentally, this type of scripting also would have worked great in a Fotonovel.

So, what exactly did Mr. David contribute to the story if he just aped the dialog? Well for one thing, the sequence of the story was different. It begins with Flynn being digitized and during that process the rest of the opening scenes of the movie are shown as sequential flashbacks. That worked fine for me. However, it's in these digitizing scenes and the parts when Flynn first materializes into the Game Grid that David adds something new and interesting -- his narration (re: captions). I especially liked how he explains how Flynn can still "think" while he's being digitized.

The whole caption sequences aren't very lengthy (certainly not like a Bronze Age Marvel comic), but they primarily expound on the religious themes of the film dealing with a Creator and his creation. In the film, the "good" programs have faith in their users, which they've never seen but earnestly believe in regardless. David takes it further and applies it to Users as well, who may also have their own creator too. Unfortunately for the programs, their users don't see them as individuals at all, which they are in the Game Grid, so their faith is misplaced:

Clu screams and he knows he is going to his user now. He waits to see the face of his maker, smiling, greeting him, welcoming him. Instead he sees nothing but blackness and his last coherent thought is, "Oh, User, why have you abandoned me?"

That was the scene where Clu gets derezed in the first movie. This is an important quote, because Clu is recreated in the new movie prequel, interacts with his creator (Flynn) and loyally serves him, before eventually betraying him -- setting up the conflict in the new film.

Like I said David also deals with the "forces" watching over Flynn's experiences. Here is the full text that accompanies Flynn's transition into the Game Grid:

It happens in a matter of seconds...
...And yet seems to stretch for an eternity.

Everything that Flynn IS and ever was has led him to this moment with seeming INEVITABILITY...
...And Free Will is just another misplaced belief.

A story they tell the rubes to make them think they have some CONTROL over their lives...
...Instead of the sad truth that they are all mere playthings in the hands of their programmers or users or gods or whatever you choose to call them...
...And that -- long story short -- those vast, unseen beings don't really give a damn what happens to them.

Because to the creators, you see...
It's all just a big game.
Guess what? I was not happy with this sequence at all! While I appreciated the acknowledgment of a Creator for us users, I reject the assertion that we are mere playthings to the higher power and that our fates are set. I could go on about this at length, but I won't right now. I wouldn't have minded it so much if this was a first person narration from Flynn's perspective citing his beliefs, but to have the universal narrator make such declarations as fact was over the line. Still the working of the "big game" coinciding with Flynn's arrival to the game grid was effective.

One of the other things David added was Flynn's thoughts on seeing TRON for the first time, where he contrasts Flynn's self-centeredness with TRON's selflessness and faith in the users. Flynn feels ashamed and sees TRON has more human than himself.

Despite that one section, I was surprised and delighted to see a deeper layer added to the story. It still would have worked better as a fotonovel or it would have been nice to fashion it like a 1982 comic book adaptation with that "old school" sort of storytelling. I still think that Marvel's Logan's Run series is the BEST movie adaptation ever done in comics, making full use of the comic medium and going beyond just replicating the movie scene by scene.

Overall Grade C+: For the most part an enjoyable adaptation (if you liked the film), but an unnecessary one in terms of how it's constructed. However, Peter David adds an interesting layer to the story, which salvages the whole project.

UPDATE: I've been thinking about my statement that the programs' faith in their users is misplaced. That may have been true for Clu, but it certainly isn't going to be true for TRON, since his user Alan is trying to contact and help him and will eventually do so. Most likely the narration will change to reflect more than just a cold impersonal sadistic creator in part 2.