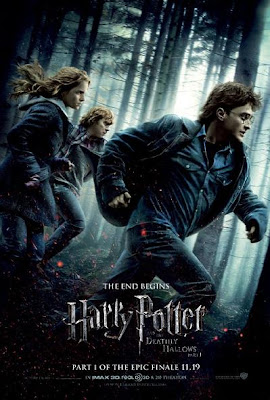 
Sadly I only got to see the newest Harry Potter movie last night breaking my normal tradition of seeing the midnight showing. Regardless I am super excited about the newest edition to the Harry Potter movies. I am a big fan of the Harry Potter books and the 7th (and final) book was one of my favorites - the 3rd and 5th book being my other favorites in the series. As the 3rd and 5th movies were some of my least favorite lets just so I was a bit worried about being disappointed in the final 2 installments of these movies. For those of you who don't follow Harry Potter the makers of the films decided to break up the final film into 2 movies which, while frustrating, was probably a good idea. This film didn't disappoint and honestly I'll probably go and see it again while it's still in theaters - but even with breaking it into two movies so much gets lost due to time constraints.


First of all the good/great.


The movie really set the mood of the book. Harry's now living in a dark and dismal world with very few rays of light. While there is still some humor the movie conveyed the setting and feel of Harry's world very well - the opening to the movie was brilliant. The movie started showing Harry, Hermione and Ron (Ron only to a small extent) preparing themselves for what they know they'll inevitably face - going underground with Harry as he hunts for the keys to defeating Voldemort. Honestly I was tearing up fairly early on watching Hermione erase herself from her parent's memories in order to protect them.


The scene with the Order of the Phoenix getting Harry to protected ground by having multiple people drink polyjuice potion to look like Harry was rather entertaining at the start and as usual the actors playing Fred and George Weasley were brilliant. I also teared up when they killed Hedwig though. All considered I'm fairly certain the last movie will be an emotional roller coaster.


The actors all did a wonderful job. I think considering these actors pretty much grew up playing these characters has pretty much made for some of the most accurate character portrayals I ever seen - even the guy who plays Draco Malfoy (who used to be a terrible actor) has been excellent the last few movies. Hermione, Harry and Ron's difficulties in living in a tent and barely avoiding detection was very realistic with how their friendship becomes truly tested over time.


The battle scenes we good as well. Nagini was very scary and the wizard magic battles were well choreographed.


Honestly I don't actually have any complaints about the movie as someone who's read the books. I can easily fill in the blanks myself with what I've read. However lots of fans have only watched the movies and don't have the same information to pull from. They really haven't explained the horcruxes very well (they didn't take the time last movie and you can see the lack of further explanation in this one). The movie going audience is missing key information when they watch the movies. While I understand time constraints the movies seem to just throw information at you at seemingly random intervals and I'm sure this must seem to leave unexplained plot holes to the movie audience. I know that I have to explain some things to my fiance when we watch the movies as he hasn't read the books.


They also cut out a lot of the secrecy and disguise Harry had to use in the book - although as far as the movie goes I can understand - the more they have the actual actors playing the characters (rather then random actors to convey Harry using polyjuice potion) the better the acting turns out.


I had a great time seeing part 1 of the Deathly Hallows and can't wait until the final installment. Also I really want the new Gryffindor hoodie Hot Topic is selling... sadly it is $50 :( Regardless, great movie, great story, great acting, great effects. Despite the plot gaps I continue to be a huge fan of the Harry Potter movies and they have taken the time to try and convey the final book with as much accuracy is possible with a modern movie and all the time constraints thereof.
Posted by Gwen at Monday, November 22, 2010