Lee: Another month, another huge stack of indie books to wade through. I can tell that it’s January solicitations because it is definitely lighter than normal. That’s good because I know I will need to recover from Christmas anyway.
Gwen: Ah Christmas recovery...

Antarctic Press
Chip Second Crack #3 by (W/A) Richard Moore
Presenting another chapter in Richard Moore's new all-ages title! Diminutive gargoyle Chip always knew the Jersey Devil was real, and now he's caught him. But an obsessed cryptid hunter is also on the Devil's trail and will stop at nothing to bag his trophy... and if he can add a certain diminutive gargoyle and his ever-loyal pixie friend to his trophy wall in the bargain, so much the better! #3 of 3, $3.99. Go here to see Moore’s book Boneyard, also excellent. And here to read a preview of the first issue
Lee: Some friends of mine have been raving about this so I thought I would give it some press. Richard Moore is a great writer/artist who is a master at the light hearted tale. This is excellent if you are looking for something to make you smile and laugh.
Gwen: This looks really cute. I think I just like the idea of a tiny Gargoyle. The cover is amusing as well. 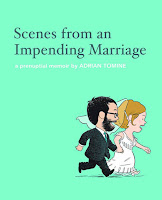 Drawn & Quarterly
Scenes from an Impending Marriage HC by (W/A) Adrian Tomine
At the behest of his soon-to-be wife, Adrian Tomine set out to create a wedding favor for their guests that would be funnier and more personal than the typical chocolate bars and picture frames. What started out as a simple illustrated card soon grew into a full-fledged comic book: a collection of short strips chronicling the often absurd process of getting married. A loose, cartoony departure from Tomine's previous work, Scenes From An Impending Marriage is a sweet-natured, laugh-out-loud skewering of the modern marriage process, including hiring a DJ, location scouting, trips to the salon, suit fittings, dance lessons, registering for gifts, and managing familial demands. $9.95
Lee: Tomine is one of those great indie voices that manages to capture the real world in comic book form like no other. Personally, I find his work dull as dirt and more than a little depressing, but I appreciate it. But, this sounds completely different from all his other works. It sounds like he has managed to capture the real tension of planning a wedding and the humor of it too. If only I knew someone who was getting married soon because I am sure that person would love it!
Gwen: ... wedding planning sucks. A lot. I've tried to minimize my actual need to plan my wedding as much as possible as to reduce my stress levels. Sadly even my relatively small wedding requires some amount of planning. Him making a comic book as wedding favor is pretty funny though.

Fantagraphics Books
Approximate Continuum Comics GN by (W/A/C) Lewis Trondheim
Approximate Continuum Comics brings American readers the first portion of the Trondheim autobio trilogy that also comprises the Eisner-nominated At Loose Ends meditation serialized in Mome (which will be released as a graphic novel in 2012) and the ongoing Little Nothings series of short slice-of-life stories (three to date from NBM Publishing), as well as the first three chapters serialized in the Nimrod comic book. In Approximate Continuum Comics, Trondheim's typically graceful, confident cartooning shows him wrestling with his own demons (sometimes, in dream sequences, literally) and an often malevolent world, while trying to maintain his rising career as one of Europe's most beloved cartoonists. $18.99
Lee: I have been a long time fan of Trondheim and his slice of life books. Whereas Tomine captures the gritty realism and pain of life, Trondheim only captures the humor. I have all the Little Nothing books and if this is similar to those, and there is no reason to believe they won’t be, then this will be a treat.
Gwen: This does look fairly interesting.

Strange Case of Edward Gorey HC by Alexander Theroux Originally released as a slim paperback 10 years ago (now out of print and fetching collector's prices), this in-depth illustrated monograph on the late, great Edward Gorey returns as a thoroughly rewritten (twice as much material as the first edition!), expanded and redesigned hardcover. Drawing from a multitude of references and his own personal relationship to Gorey, literary heavyweight Alexander Theroux has accomplished an amazing feat of illuminating the real Edward Gorey with ambiguity, wit, fervor and reverence, combined with honest and clear-eyed appraisals of his work. No Gorey fan can be without it. 144 pgs, B&W, 6 x 9, $14.99
Lee: Gorey is one of the Kings of Goth comics making this a must read for the Lenore fans out there. This is supposed to be an excellent book about one of the best artists of the macabe.
Gwen: While intriguing this isn't really a genre I ever got much into. As Lee said, Lenore fans should like this. 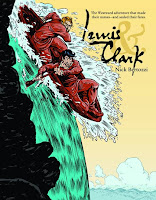 :01 First Second
Lewis & Clark GN by (W/A) Nick Bertozzi
In 1804, Meriwether Lewis and William Clark set out on one of the greatest adventures this nation has ever known. Their mission was to follow the Missouri river from Pittsburgh all the way west to the Pacific Ocean. Appointed and funded by President Jefferson himself, well-staffed, lavishly equipped, and led by a cadre of experts (including the famous Sacajawea), the expedition was considered a success almost before it had begun. There was only one problem: Everything. $16.99 You can visit Nick here.
Lee: First second has been one of the best publishers of historical comics for a long, long time. Add Bertozzi, and accomplished writer/artist and this is a winning combination.
Gwen: Wow, this looks awesome. I don't always enjoy "historic" fiction but when done right it can be a lot of fun. Lewis and Clark's expedition is a good historical story to draw from so I have high hopes for this.