Lee: EEEsssshhhh. What a light month for DH! I know that it is January and all but still, this is ridiculous. Everything is in mid stride so there isn’t a whole lot of new things.
Thomm: Hopefully that means quality over quantity. 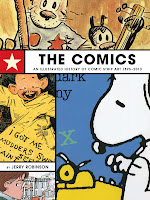 THE COMICS: AN ILLUSTRATED HISTORY OF COMIC STRIP ART
Jerry Robinson (W), Walt Kelly (A), Winsor McCay (A), Milt Caniff (A), Hal Foster (A), and others
From Jerry Robinson, legendary creator of the Joker, seventy-year veteran of the comics industry, and prominent figure in monthly books, daily strips, and comics journalism, comes a comprehensive history of the truly American art form! The Comics is a fully reworked and updated edition of the 1974 classic that chronicles the origins and evolution of comic strips, from prior to the Yellow Kid through today, and highlights the game-changing contributions of such creative luminaries as Milton Caniff, Walt Kelly, Hal Foster, and Winsor McCay, among countless others. A fascinating resource of enduring excellence for fans of the art form, historians, and casual readers alike, this edition has been extensively revisited by Robinson and tells the stories behind the newsprint page. The Comics is an authoritative history of the medium from living legend Jerry Robinson! HC, 9" x 12", FC, 400 pages, $39.99
Lee: I think I have just about read this book in 5-10 page increments over the years but never all at once. It’s a very good book and well worth your time if you have any interest in comic strips. The problem is I am not sure many people these days care. The hey-day of the comic strip is over and I don’t think it commands the respect it once did. Not to mention the high light of most papers is either a Snoopy rerun or bland Garfield strip. This is more for the comic historian than the average reader.
Thomm: If nothing else it’s a glimpse into what people thought was funny or politically relevant in a different era. It’s not something you can go into cold, with no understanding of the times. Kind of like watching old movies on TCM. 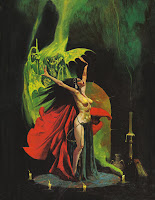 CREEPY ARCHIVES VOLUME 9
The latest volume in Dark Horse’s award-winning Creepy Archives hardcover run will shake, rattle, and obliterate your sanity, as the stories from issues #42-#45 of Warren Publishing’s landmark horror series arrive as perfect antidotes to seasonal melancholy. In the early 1970s, comic-book legends like Bruce Jones, Gardner Fox, Richard Corben, Dave Cockrum, and Mike Ploog conspired to bring readers wonderfully mixed anthologies of terror and suspense! This volume also features a cover by celebrated fantasy and horror illustrator Sanjulian and a brand-new foreword by comic-book historian and writer Richard Arndt. HC, 7" x 10", b&w, 256 pages, $49.99
Lee: If you haven’t purchased any of the Creepy Archives, then this is a good place to start. Creepy went through a dark period in which it wasn’t very inspired, but it eventually refound it’s footing and become great again. This is closer to the beginning of Creepy’s second golden age and has impressive art by Spanish artists and of course, American greats like Richard Corben. It’s expensive but these are the horror stories of your childhood… if you’re over 40 that is.
Thomm: I’m over 40 but didn’t read this as a kid, so it’d be all new to me. I’ve never been a big horror fan, regardless of the medium, but if I had to choose between movies/TV, books, or comics, comics would be the one because there’s none of that jump out and startle you nonsense that passes for horror in so many movies/TV versions, but you get all the great pictures that books don’t have.

JOHN CARTER OF MARS: WARLOARD OF MARS
Marv Wolfman (W), Chris Claremont (W), Gil Kane (P), Walt Simonson (P), Frank Miller (P), Sal Buscema (P), and others
The greatest hero of two worlds, spacefaring adventurer John Carter of Mars, returns! Marvel at these classic tales of danger and daring as John Carter battles deadly opponents, warring civilizations, and a host of Barsoomian beasts, and see for yourself why Edgar Rice Burroughs’ John Carter has been one of fandom’s favorite sci-fi characters for nine decades! Featuring comics legends Marv Wolfman, Chris Claremont, Gil Kane, Frank Miller, and many more. This volume includes all twenty-eight issues of John Carter: Warlord of Mars plus all three annuals, collected for the first time! TPB, 7" x 10", b&w, 632 pages, $29.99
Lee: OH OH OH I cannot wait to get this. I wish it was in color. I wish it were in hc. But, since it’s not I’m getting this. Do I know that it is completely over written with text boxes every where explaining the obvious? Oh yeah I do. But does it have art by Gil Kane, inked by Rudy Nebres on the first 12 issues that is some of the best of Kane’s entire career? Oh yeah it does. This is as close to perfect comic art as you will ever get.
Thomm: I loved the Burroughs books as a kid but never got into the comics. With this art, though, it’s definitely something a fan of comics should get. I’ll just try not to be trampled by Lee in getting there.

STAR WARS: DARTH VADER AND THE LOST COMMAND #1 (of 5)
Haden Blackman (W), Rick Leonardi (P), Dan Green (I), Wes Dzioba (C), Tsuneo Sanda (Cover), and Douglas Wheatley (Cover)
Still haunted by the events in Revenge of the Sith, Darth Vader must set aside his past and put his future on hold for a mission to the mysterious Ghost Nebula to locate—and if possible, rescue—a missing Imperial expeditionary force. But what seems a perfect opportunity to lose himself in his duty is complicated by two factors: he is paired with a willful yet highly competent co-commander, and the officer they are being sent to locate is the son of Vader’s rising nemesis, Moff Tarkin. FC, 40 pages, $3.50
Lee: I’m not a huge Star Wars fan but I’ve always had a soft spot for Darth Vader. It’s too bad that his costume hasn’t aged very well in all the years since he first appears. But, this still sounds good and the covers look great so I just might check it out.
Thomm: The pitiful display that was the movie Revenge of the Sith has killed any interest I might have in this. Those prequels turned Darth Vader from one of the greatest villains of all time into a simpering fool who doesn’t make decisions for himself so much as he is manipulated into situations and faux decisions. The ancillary rival business isn’t something from the movies, either, so it’s not pulling up my interest level any.

Lee: Wow, this was a light month. But the JC collection is just too awesome to ignore. I may never read it but I can guarantee that the pages will be dog eared from me looking at the pictures.
Thomm: John Carter is definitely the high point here. The Creepy has a good chance, too, but of the two I’d go with John Carter.
Posted by Lee at Wednesday, November 03, 2010