Lee: It feels like IDW is going to have another great month. I can already tell they are going to take a whole bunch of my money.
Thomm: France is obviously treating you well 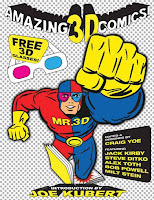 Amazing 3D Comics HC
Before there were 3-D movies, there were 3-D comics! In the mid-fifties, comic-book great Joe Kubert hit upon the idea of doing comics in 3-D, which resulted in some of the best-selling comics of all time-print runs in the millions! Eisner Award-winner Craig Yoe collects the best of these stories and samples by artists like Jack Kirby, Steve Ditko, Bob Powell, Al Jaffee, Russ Heath, Milt Stein, Alex Toth, and many more. Carefully re-mastered and reproduced in large format so that every dynamic, eye-popping effect can be looked at in astonishment. The comics cover every genre: superhero, jungle adventures, horror comics, science fiction, funny animals, satire, western and romance! The fascinating behind the scenes introduction is by the mastermind behind 3-D comics himself, Mr. Joe Kubert! Rare art and ephemera as only Yoe Books does it. And, yes, of course, this book comes with special FREE 3-D GLASSES! BUT WAIT! There's more! This must-have hardback book has a special lenticular 3-D cover that puts the amazing in Amazing 3-D Comics! HC, FC, 176 Pages, 8.5 x 11, $39.99
Lee: This really, really interests me but I’m not sure I care that much about 3D comics. The price is reasonable considering it’s an oversized hc, but I don’t know if I can do it this month.
Thomm: Not my cup of tea. I’m sure the art is great, but ‘50s comics and 3D just don’t appeal to me. Certainly not $40 worth, anyway.

Dark Sun #1 by (W) Tony Lee (A) Andrew Currie
The post-apocalyptic DUNGEONS & DRAGONS setting gets its first ever comic! Beneath a crimson sun lie wastelands of majestic desolation and cities of cruel splendor where life hangs by a thread. Welcome to Athas! In Part 1 of Ianto's Tomb, a runaway gladiator and part-time slave hunter cross swords, forever entwining their fates on this savage desert planet. #1 of 5, $3.99
Lee: IDW is certainly ramping up the D&D line of books with yet another entry. This actually appeals to me because I don’t need another Conan book but I like to read good old sword & sorcery stories. It doesn’t hurt that Currie has been in doing comics for years so I’m betting the art will be good.
Thomm: I didn’t know they had the apocalypse in the D&D world. I wonder if it’s a monotheistic apocalypse or a polytheistic apocalypse? I usually like the latter better. What does a part time slave hunter do in his other job? Wait tables? Make collections calls?

Fallen Angel: Return of the Son #1 by (W) Peter David (A) J.K. Woodward
Once upon a time, Jude, the son of the Fallen Angel, was the greatest power in Bete Noire, before being brought low. Now he serves the needs of others while angrily remembering his glory days. But that may be about to change with the arrival of the ageless individual for whom Bete Noire was originally named-Enoch, son of Cain, has come to the city that Shapes the World, claiming that he's capable of restoring Jude to his former glory... but what will be the cost to Jude... to the Fallen Angel... and to the rest of the world? #1 of 4, $3.99
Fallen Angel Omnibus Vol. 02 SC by (W) Peter David (A) J.K. Woodward

Picking up where Omnibus Vol. 1 left off, this second installment contains issues #22-33 of Fallen Angel, bringing the main series to an explosive and revealing conclusion. Find out the final secrets of Bete Noir and its many denizens as Peter David unwinds the final chapters of his compelling drama. Also includes the mini-series Fallen Angel: Reborn, guest-starring Illyria from Joss Whedon's Angel. $24.99
Lee: Wahoooo, a new Fallen Angel series! Right now, this is the best Peter David series on the market. There is no editorial mandate, or large crossovers, to deal with so this is as pure PAD writing as you are going to find. I also point out the latest omnibus. If you aren’t familiar with the stories, the omni’s are a great way to do it. This series is highly recommended.
Thomm: Um, ok. I know nothing about this. In fact, right now I can’t recall who Illyria was in Angel, which I watched. Guess there’s at least some crossover here. I’d need some more information on what the series is about. The new book’s summary doesn’t tell me anything about the original series. I think I’d need to see the Omnibus Vol. 1 summary to get a better feel for it.
Lee: Actually, you need Omnibus Vol 0, which reprints the DC series. Trust me, you will like this.

Off Road GN by (W/A/C) Sean Murphy
When three misfit friends from high school reunite after a string of bad luck in their personal lives, what is the first thing they do? Go off-roading, of course! Trent, the art school student's girlfriend has just broken up with him. Brad is a good guy, but his abusive father is making his life hell. Greg is full of money, but he's as aimless as he is rich. Each one thinks that challenging Mother Nature is somehow going to fix whatever issues they're dealing with. That is if they ever get their Jeep out of the increasingly bizarre swamp that they are trapped in. Written and illustrated by Sean Murphy (artist of Grant Morrison's Joe, The Barbarian, and Batman/Scarecrow: Year One). Off-Road won a 2005 American Library Association award for young adults. Features an all-new cover by Sean Murphy! TPB, B&W, 144 pgs, 6” x 9”, $17.99
Lee: It’s amazing what a high series will do for your backlog. This story has been around since 2005, and was originally published by Oni. It was well received and those that read it seemed to like it. I don’t believe it is nearly as spooky as the hype makes it out to be.
Thomm: I would think being full of money would hurt. Maybe it’s me, but I didn’t get a spooky vibe out of that summary. Could be good, and it’s a good price.

Torpedo Vol. 03 HC by (W) Enrique Sanchez Abuli (A) Jordi Bernet
Abuli and Bernet's masterpiece, Torpedo, is the story of Luca Torelli's rise from the gutters to become the top killer-for-hire in 1930s New York City. The Torpedo, along with his constant companion, Rascal, wreaks swift and terrible underworld justice on all those unfortunate enough to cross their paths. Abuli's stories are full of cruel and morbidly dark humor, and Bernet's art style is perfect for showcasing New York as a both stylish and grim. Together they work seamlessly to create a classic and timeless series. $24.99
Lee: I picked Vol 1 & 2 when they were released, why not Vol 3 too! The first two were great fun and I expect more of the same. Be warned, these are not for the meek.
Thomm: Haven’t read these, but I feel like there’s some similarity to the Spaghetti Brothers. Probably only superficially so. Aside from that how, exactly, does a killer-for-hire wreak any kind of justice? Isn’t he just the tool of those who hire him, justice having little to do with the employer’s motivations?

Lee: He's more freelance than hired in these books. Often, he's trying to get rich, steal other people's money, or has been hired, helps them, then steals their money. Torpedo is far more Punisher, anit hero, than good guy. Actually he's not a good guy at all. You would like this too.

Lee: The Fallen Angel Omnibus is definitely coming home with me. The only question is whether or not the fancy hc about 3D comics makes it too. I like it but I just don't know.
Thomm: Nothing here’s really jumping out at me. Then again, I’m far from Lee’s league when it comes to purchasing collections of titles. If I were to take a leap on any of these, I think it would be Off Road.
Posted by Lee at Friday, November 05, 2010