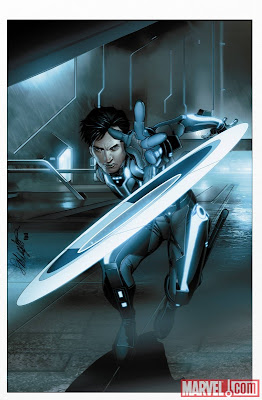 Format 52 pages of story and art

Isn’t that an awesome cover? I certainly thought so. I just love those glowing white accents. It definitely got my attention on the stands (Although, I was actually looking for it too). You see I’m a big-time TRON fan and the original movie is one of my favorites (and I’ll probably now watch it again this weekend). In fact other than the race car scene in Iron Man 2, the TRON: Legacy preview was probably the most memorable part of that film-going experience. I’m really, really excited about the new film – it’s the only one I even care about seeing this season.

TRON: Betrayal is the first of a two-part mini-series, which provides the bridge between the two films. That wasn’t a misprint up above, this issue is actually a massive 52 pages without Ads. For only $4.99 that’s a good deal for your money. I was tempted to just wait for the trade, but I only had one other book in my box this week (Life with Archie Married # 3 – Excellent as always) and I desperately wanted something else to read.

The story takes place in 1983 probably within a year of the end of the first film. Flynn is now running Encom, but he’s not content to just be the corporate mogul of the largest video game company – he needs to be creating something new. So, he develops the “Grid” where he can experiment with new programs. He’s brought in TRON from the old system, because he needs help with security issues and there are some digital “bugs” that are popping up in places that degrade the environment. Flynn digitizes himself to enter the Grid from the outside world and he can leave whenever he wants.

However, in addition to his Encom duties that he is usually shirking, Flynn has more important things that require his attention in the real world: a new wife, who is expecting their first child (a boy). With all these competing priorities, Flynn decides to create a digital version of himself (Clu) to keep control and order within the Grid (You just know that’s not going to work out well). It’s a really neat scene though as he lifts his double out of a flat panel. Clu really takes to the task in earnest and gets bent out of shape when the isomorphic algorithms (Isos) start to pop up. They are a new form of life created by the Grid itself, rather than programmed. Flynn is jubilant at this development, but it’s too uncontrolled for Clu. You can tell the Isos from the regular programs, because they have glowing white streaks on their faces. (Hey, it’s TRON where the programs are people – you just have to accept it!)

Curiously, the gridbugs are starting to concentrate in the Iso areas (Hmmm, wonder who’s causing that?). So, TRON is on the scene saving their lives from falling digital debris and stuff, becoming their hero. I wonder if TRON will look just like Bruce Boxleitner in the new film (probably not) – maybe it’s a newer security program to explain a different actor, not sure.

Back in the real world, Flynn’s wife is on bed rest and is much further along in the pregnancy. He’s doing a good job taking care of her, including the “oh so important” foot rubbing. I really like these “domestic” scenes. He’s working on a communication device that will allow her to contact him while he’s in the Grid. Time in the Grid runs incredibly fast compared to our time, so much has evolved during his absences. Clu is really getting frustrated and when Flynn leaves abruptly after receiving “the call” from the outside, Clu ominously decides that “for all intents and purposes. [He is] the creator” and with TRON’s help will keep their world “a perfect system”. There’s a running analogy of the rise of Rome throughout the book and it looks like the Grid is going to follow suit with Clu as Caesar.

In what is probably the most ridiculous scene in the book, Flynn drives a motorcycle into the hospital, crashing into the reception desk, to see his baby being born, nearly knocking down a guy with a leg cast in the process. Always a bit late, he does arrive in time to cut the cord. The joy on his face though is priceless. His wife is VERY understanding too, to go through all that without him there most of the time.

I’ve never heard of any of these creators, but they do a very fine job. The story was very easy to follow and the art was dynamic and exciting. Andie Tong doesn’t capture Jeff Bridges likeness exactly, but it certainly is more than adequate. The smiles alone are a constant reminder that this is the same Flynn from 1982.

GRADE B+: While not quite on par with the Star Trek: Countdown prequel, this is a great comic that has me even more excited about the new film. I’m really looking forward to the next issue and I’m wondering if Marvel’s version of the original film will work as well.
Posted by Matthew at Saturday, October 09, 2010