This is what comes of following authors over characters. In 1991 I bought the trade of Neil Gaiman and Dave McKean's Black Orchid, which was originally a three issue series in 1988. I had no idea who Black Orchid was. In fact, I've not read a single Black Orchid story since. That's ok, though. This one story is more than sufficient.

So, according to Wikipedia, Black Orchid's been around since 1973. In all that time until 1988 she had no origin story. She was just some woman who wore a purple costume, could fly, had super strength, and some level of invulnerability. She didn't wear the costume much, either, as she spent most of her time masquerading as others in order to infiltrate some nefarious scheme. She was called Black Orchid because she left such a flower as her calling card on the bound and gagged person she had imitated.


And that's how Gaiman starts his story. She's infiltrated a criminal organization and is trying to figure out who's at the top of the pyramid but is one step away. The mastermind has figured her out, though, and his underling kills her by immobilizing her with some near unbreakable bindings, shooting her in the head, setting her and the room on fire, then detonating explosives in the room. I quibble with this sequence in that she doesn't break the bindings until after the room's been set on fire and everyone else has left. She appears to be in a weakened state by this point, from the fire drawing moisture out of the room, so it would have been more likely that she could break the bonds before the fire was set, when the bonds were first applied. 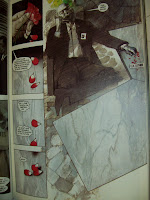 Now, with her previous stories not having told much, one would think a shot in the head that shows the bullet exploding out the other side would have been enough to do her in, but it turns out she's a plant hybrid, which our mastermind (who's Lex Luthor, in full on corporate evil mode), has figured out. The fire's what ends up doing her in when she's too weak to get out a window before the explosives go off.


The full back story for Black Orchid turns out to be that she's based on a human named Susan Linden-Thorne. Susan was childhood friends with Philip Sylvian (names are destiny, you know). He was 4 years older, but he was a dork fascinated with plants. She was molested by her father. It was rather Forrest Gump. She eventually ran away from home with some assist from Phil. He received all of 2 postcards over the years, both from locales in Europe. The first being Amsterdam, I'm assuming she went into prostitution.


In the meantime, Phil went off to college where one of his professors was Jason Woodrue and his classmates included Pamela Isley and Alex Holland (and Holland's future wife, Linda). He thinks Woodrue's in Arkham, Holland is dead, and doesn't know where Isley is by this point. 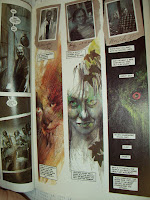 All of which is germane because somewhere along the line Susan Linden came back to Phil. She had been a croupier in Vegas and married Carl Thorne, an arms dealer who worked for Luthor. Thorne was arrested and Susan subpoenaed to testify against him. It's at this point she's back with Phil. Susan and Phil are going out somewhere together, taking a cab, when Susan is killed by a masked Thorne. Somehow he's still convicted on the arms smuggling and serves 7 years.

But, Phil took DNA from Susan's body and blended it with plant DNA to create Black Orchid. No explanation of how this worked when it hadn't ever done so in previous experiments, but for the last 7 years Black Orchid has been operating as a hero, in Metropolis, I think. Just as she's killed off by Luthor's minion, Thorne is released from prison. A new Black Orchid awakens from other plant pods when the original dies, but she's confused. She doesn't know who she is or what she is. Phil tries to explain her back story. She's tired and goes outside to rest in a tree where she can absorb moisture from the air. While she's out there, Thorne, who's been sent away by Luthor when Thorne comes looking for work, breaks into Phil's house, ties him up and beats Phil to death. Thorne also discovers Phil's lab and wrecks all the other pods but one whose occupant is in a child stage of development and flies away before he can kill her. 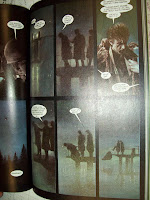 Thorne's dumb enough to call Luthor about his discovery after he's wrecked all the information Luthor could have used, so Luthor has his boys chain up Thorne and dump him in a river. Despite Thorne having killed Phil, the new Black Orchid rescues Thorne. Thorne is so grateful that he's now out to kill Luthor, his henchmen, and the new Black Orchid.

Luthor, of course, is trying to get ahold of the new Black Orchid and the child one, who is called Suzy. Simultaneously, Black Orchid is searching for Woodrue, Isley and Holland to figure out who she is. Batman directs her to Arkham, but Woodrue's gone. Isley, on the other hand, is there. She's not helpful, though. She's just deranged. Batman then sends her to Louisiana to find Holland, who, of course, is Swamp Thing now. Swamp Thing puts her in touch with The Green, which gives her some idea of who she is. He al 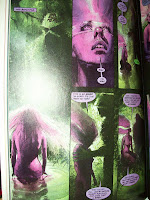 so draws seeds out of her so she can plant more "sisters". She rescues Suzy from Luthor and the two of them go to the Amazon, where she plants the seeds.

Both of them are dissatisfied with staying in the Amazon, which is attributed to their human DNA. Got me how that works. There are plenty of people who live in the Amazon. If they're missing human contact they could just hang around with them. Hell, they could have operated as defenders of the Amazon from deforestation. Instead, Luthor's minions show up to take one or both of them back for dissection. At the same time, they're being stalked by Thorne, who's totally off the deep end. There's a stereotypical Afrikaans tracker who has nothing but disdain for the natives. He's killed off by Thorne, a drunken, city boy, arms dealer, far too easily. More bizarrely, after showing an ability to stalk and kill a jungle hunter, Thorne just charges out of the bushes and is shot down by the minions. 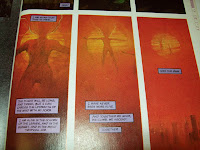 
McKean's art, of course, is wonderful. Most of my experience with his art has been covers, especially for Sandman. This is in the minority of works that I have an entire story by him. If 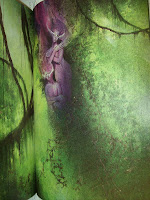 art's your thing, you could completely skip the story and just have it as an art book. It's a very minimalist use of color, relying heavily on pencils and inks. What colors there are is fairly limited to just a few, particularly purple and green, with the occasional orange or red.


I enjoyed this story very much, despite its weak points. It certainly harkens to Gaiman's Sandman work, which succeeded it. Where Sandman touched on the DCU in its opening arc, outside of Dr Destiny's active role in that story, there was little more than tangential reference to other DCU characters. In Black Orchid, Gaiman works in many more DCU characters, with Batman and Lex Luthor playing pivotal roles, while Poison Ivy and Swamp Thing are more incidental. Of course, this precedes the creation of Vertigo, so the story is published and set in the DCU. 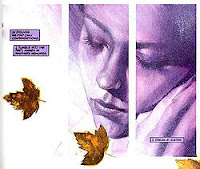 I'm not sure that as a long term story it was the best way to go with Black Orchid. Sure, her name leant itself to the plant tie. Swamp Thing was hugely popular at the time, too, but I think that was more of a detriment for an ongoing series. Black Orchid had too much overlap with what Alan Moore had done with Swamp Thing and not enough new ground to trod.

As a limited series it made for a very good work. The art was great and the sort of transition for Gaiman from being inspired by Swamp Thing to creating the world that would be Sandman, is one of those moments that a Gaiman fan should read just to see the evolution in process.
Posted by Thomm at Sunday, October 10, 2010