Image Comics
Viking Vol. 01: Long Cold Fire SC by (W) Ivan Brandon (A/C) Nic Klein
The most violent criminal underworld in history! Finn and Egil, brothers - one bad, one worse - are trying to stab and steal their way to a seat at the table. Two men at war with the world around them. But today's the day the world fights back. From the writer of The Cross Bronx comes a crime book for the 9th Century. This collection includes lots of never before seen new material. $14.99
Lee: From what I can see, everyone loves the art in the series and thought the story was too light in single issue format. Which means it will read perfectly in a collected format. I’m an art guy so I wanna see what all the hub bub is about.
Gwen: As a story person this solicitation does nothing for me. Next!

Light Vol. 01 SC by (W) Nathan Edmondson (A) Brett Weldele
It is as sudden as it is deadly. Its origins are unknown. When it strikes, a father must risk all to protect his daughter and escape across the Oregon countryside-before they are infected by The Light. Collects The Light #1-5 $16.99
Lee: WWWaaaayyyy back in time, I picked this as a book of interest, and Edmondson actually stopped by to encourage us and support the book. Well, that’s good enough for me! If a writer is going to leave a message on the site, then the least I can do is try his book. It doesn’t hurt that it still sounds good.
Gwen: I read this already - Jim was sending it to me. It's worth reading but it's very surreal. It's got a good horror vibe going on as well.

Manx Media
El Vocho GN by (W/A) Steve Lafler
With El Vocho, green energy comes to the comics as Steve Lafler offers a crackling urban romance pairing Rosa, a brilliant inventor, with laconic Eddie, geek artist. Rosa and Eddie meet in a fender bender and tempers flare, but cupid shoots his arrow and the two fall for each other. Can love blossom in this tense thriller, pitting big oil against budding genius Rosa? $12.00. Visit Steve here and read an early review here.
Lee: This story sounds really interesting and the art looks really good too. It’s not often that I link to reviews but I really liked it, and it provided a clear picture of what the book will be all about. If you like off kilter, slice of life stuff then this is probably the book for you.
Gwen: Working in claims I have a hard time buying the premise but it still looks like it could be a pretty cool book. 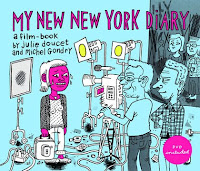 Picturebox
My New New York Diary HC by (W) Julie Doucet, Michel Gondry (A) Julie Doucet
In 2008, the famed director Michel Gondry (Eternal Sunshine of the Spotless Mind) proposed to legendary cartoonist Julie Doucet that they make a film together. Little did Gondry and Doucet know that the process itself would be the film, and they'd soon be starring in a reality comic and film of their own devising. My New New York Diary contains all of Doucet's drawings for the film, as well as the DVD containing the film itself. Both the film and Doucet's graphic novella are being released only in this deluxe, hardcover volume which does full justice to the richness and warmth of Doucet and Gondry's collaboration. NOTE: Book includes DVD.$24.95 Previews of Julies work can be seen here.
Lee: Doucet is an amazing cartoonist who has produced some excellent books. Some are crude, some are brutally honest examinations of her life, and all are very good. If you want to not only read about a great indie creator, but also see her then this a great book.
Gwen: Honestly if the art turns me off I have a hard time reading a comic. So this may be amazing but I won't be able to read it :(

Titan Publishing
Classic Bible Stories Vol. 01: Jesus & Mark SC
Two of the acclaimed comic strips based on stories taken from the Bible for the classic British comic Eagle are collected in this softcover edition, Frank Hampson's Jesus, Road of Courage, the life story of Jesus, and Mark, The Youngest Disciple, the story of the man who wrote the first New Testament gospel to be circulated. $14.95
Lee: Take note Matthew, this pick is for you! Actually, this pick is for every art lover out there. Frank Hampson is one of England’s greatest artists. His work is absolutely breathtaking and amazing to behold. If this is the only way to get his art, then I will buy this book. Plus the story is good too.
Gwen: Really? I don't think I can say anything in response to this as a pick without offending someone...

Undercover Fish Books
Dracula: The Dead Travel Fast Vol. 01 GN by (W/A) Andy Fish (A) Veronica Hebard
Andy Fish applies his twisted sense of humor and his dark sensibilities to Dracula, setting the story in 1931 and mixing in Nazi's, ghosts, and werewolves. Jon Harker travels to Transylvania on his first business assignment with a reclusive eccentric client, meanwhile his fiance Mina is tempted by the strapping young Texan visiting her friend Lucy in London. Includes a sketchbook section with notes on the script. $9.99. Visit Andy here and see previews here at the official site.
Lee: For some reason I feel like I’ve either picked Fish’s books or heard about him, but for the life of me I can’t figure out where. No matter, Fish has a unique art style that appeals to me and a sense of humor to match. This should be fun.
Gwen: I'm in the mood for Halloween stories right now and this seems to fit the bill. I agree with Lee here, this looks like it could be a lot of fun!

Lee: All things considered this is another strong month. Lots to look at and some things definitely worth buying.
Gwen: Indie solicitations make me want to write out an early Christmas list :)
Posted by Lee at Friday, October 22, 2010