This is a follow up post to my outrage at Levitz's butchering of Shadow Lass. To introduce readers less familiar with Tasmia to her actual character.

Emerald Empress: "EEEEK! The Eye! It's blacked out!"
Shadow Lass: "Blame yourself Green-locks!" 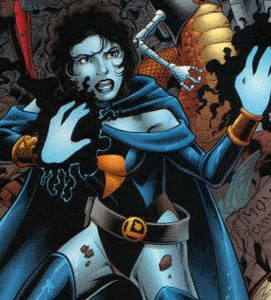 
Appearance: Tasmia is average height and deceptively delicate looking. Like many Talokians she has blue skin (the Hill people of Talock possess green skin).


Shadow Lass is the heroine of Talock VIII when she first meets the Legion. While away on a mission in space Talock VIII changed from a peaceful planet to a violent one - so much so that the Talockians destroyed any ships violating their space. The UP turns to the Legion for help and introduces them to Tasmia who is to be their guide. After a dangerous journey they end up in a citadel which Tasmia knows wasn't there when she was last on Talock. Once finding their way into the citadel they find that they've fallen into a trap! They wake up individually in death traps that seem to have been made specifically for them. Shadow Lass (who we learn has a weakness to bright light) is in a chamber of lights from which she can find no escape. Knowing that the light will eventually kill her she makes a last effort to call the shadows to her aid by blocking out the light's glare with her cape. After managing to break free the Legionnaires discover that the power they used to escape was used to fuel a dimensional warp - which released the Fatal Five from the dimension they had been trapped in! Realizing that the Talockians had been controlled from afar by Tharock, the Legionnaires quickly returned to Earth.


It was here that Shadow Lass became a Legionnaire. She followed the Legion back to Earth having developed an interest in Brainiac 5 and when the Legion was prepared to go head on with the Fatal Five, Shadow Lass was sworn in by Superboy since she was determined to fight with them. Shadow Lass ended up being the MVP for her first real Legion battle, KOing the Emerald Empress and providing Superboy, Brainiac 5, Karate Kid, and Cosmic Boy with the cover they needed to escape the Fatal Five's grasp.


Abilities: can see in absolute darkness, can cast shadows - has a weakness for bright light


Tasmia gained her powers from the spirits of her ancestors. After joining the Legion she eventually fell in love with Mon'el who in turn fell in love with her when they were in Smallville hiding from Mordru. Tasmia and Mon'el eventually married. Post Zero-Hour Tasmia was reintroduced as Umbra with similar origins to that of Shadow Lass. During Mark Waid's reboot Tasmia is once again Shadow Lass but seem much more martially oriented than before.


In relation to my previous rant about the new Legion comics I's like to point out that Shadow Lass once traveled the Universe to try and save Mon'el's life - that's how much she loved him.
Posted by Gwen at Monday, October 18, 2010