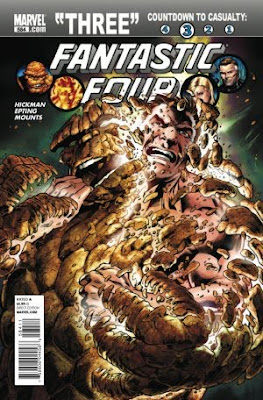 Another week, another book by Jonathan Hickman.

As I mentioned last week, Hickman is one of the most exciting new writers in comics today, but his mainstream work has been a bit uneven. Fantastic Four has been probably been the best example of this.

After a great initial arc, where a Secret Society of Reed Richards from across the Multiverse tried to solve every problem ever, the book has been a mix of great ideas with often sloppy or confusing execution.

However, with the addition of artist Steve Epting last issue, the book seems to be getting back on track. This latest issue does a particularly good job of juggling a barrage of ideas and storylines, something it has not had a lot of success doing since its first arc.

The main story of the issue follows the Thing as he gets to be human for a week and the Human Torch takes him out for a night on the town. I feel like I’ve read this story about “Ben Grimm becomes human again” a million times, but here it really worked well. Maybe it’s because of the acknowledged one week time limit, so no one is pretending it won’t be reversed, but I suspect its that the story is built around one of the best depictions of Ben and Johnny’s relationship I’ve ever read. From Johnny’s cruel practical joke at the beginning to the night they spend on the town to their final stop, its all extremely well done and feels like one of the more realistic friendships in comics.

Meanwhile, the Invisible Woman is going to escort Namor to Old Atlantis and back in New York, Silver Surfer and Galactus show up to ask Mr. Fantastic why Galactus’ corpse from the future is being hidden under the earth. The last half of that sentence is why I love comics so much.

The entire issue really clicks. The story about Ben’s regained humanity is compelling and even when we’re checking in on the subplots, we’re interested to see where they’re going. One of the biggest things this issue has going for it is the book’s new regular artist, Steve Epting. Epting has been one of the most underrated artists in the industry for a while now. Here, though, he really shows his range drawing everything from Reed’s crazy astronomy lab to a football game. Even better, after years of working on the heavily shadowed, espionage driven Captain America, Epting gets to work in a brighter color pallet with Paul Mounts and it makes his art look fantastic.

I know that Jim and a few other friends of mine gave up on this book a few months ago, but this is a really, really good issue and it’s the second in a row. Hickman really seems to be hitting his stride with Epting as the new artist. If you haven’t been reading FF, give it a look. This is very promising stuff.
Posted by Greg at Thursday, October 28, 2010