Frank Miller has always had an economy of motion in his tales, and the Marvel Graphic Novel: 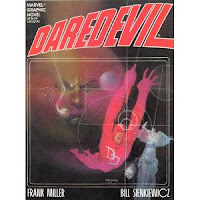 Daredevil Love and War from 1986 is no exception. What's different about it is the low level of violence. Relatively low, anyway.

Much as I like seeing Miller do the art as well as the writing, this book had the great Bill Sienkiewicz doing the art, making it quite possibly even better. The oversized format doesn't hurt, either. It allows Sienkiewicz to present the Kingpin in all his imposing glory. The Kingpin is a hulking, malevolent mass, even in his most tender 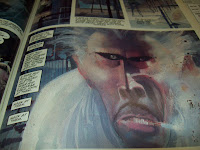 moments with his comatose wife, Vanessa. But, it's Sienkiewicz's depiction of Vincent, the drug addled psychopath that brings forth his best in representative, rather than literalist, presentation. Vincent frequently resembles a baboon more than a human, which is very much in keeping with his pychological state. 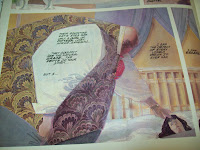 The story is a fairly simple one. Kingpin's wife is comatose. There's no organic reason for it, according to experts who have seen her. She occasionally babbles words. There's a psychologist who's tops in the field that Kingpin wants to work with his wife, but to ensure the proper motivation for getting the job done, Kingpin kidnaps the man 's wife. Her name is Cheryl Mondat, and she's blind. Vincent is the pill popping hired underling who kidnaps Cheryl. He fills her 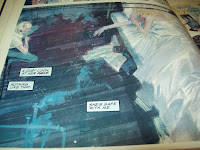 with valium to keep her compliant/unconscious while he feverishly hallucinates being a white knight protecting his queen.
Meanwhile, Daredevil's involved because, as usual, Kingpin wants him dead. Daredevil finds out from his favorite stoolie, Turk, that Kingpin, in addition to wanting Daredevil dead, has 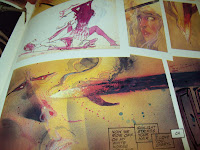 kidnapped a doctor's wife to force the doctor to cure Kingpin's wife. Daredevil tracks down the kidnapper, who is wounded while fleeing. Daredevil stashes Cheryl Mondat at his place for safe keeping while he goes to rescue the doctor. Vincent goes to his sister's house and kills her. He then goes to Nelson & Murdock, in the middle of the night, to get them to be his lawyers. He breaks in and kills the cleaning lady. He gets Murdock's address and heads to Murdock's place. He breaks in and is surprised to find his queen, who manages to kill him with a hot poker. 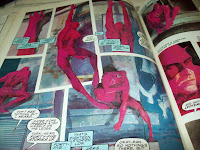 Daredevil dislocates his shoulder trying to sneak into Kingpin's headquarters and, when he finally does get in, finds the floor where Dr Mondat is kept empty but for the doctor. This is because, while Daredevil was rescuing Cheryl and then trying to rescue the doctor, the doctor had gotten through to Vanessa. With children's letter blocks she spells out X-K-A-Y-P. This infuriates Kingpin, but he lets both Vanessa and Dr Mondat go. 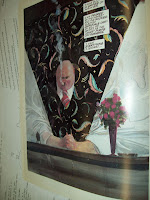 When the story started, Kingpin was thinking about his power and influence countered by his inability to cure his wife. At the end, Kingpin contemplates only his power and influence, unfettered by his love for his wife.
These were halcyon days for Daredevil, as far as I'm concerned. This story was one of many that Miller and then Mazzucchelli did that really captured the character and made him something more than a lower level Spider-man. His struggles were his own, unique to who he was and his powers, but he wasn't so burdened with every imaginable ill as I read that he has been since those days. Seems like now the only thing that hasn't happened to him is child abuse.
This tale in particular is a great way to enjoy the character without having to be intimately 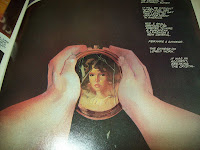 familiar with him. It's short story telling done right. The character who undergoes change is not Daredevil. It's Kingpin. Superficially, Vanessa undergoes change in a greater wakefulness, but she's essentially the same person, deathly afraid of her husband. Kingpin, in his recognition that Vanessa fears him more than she loves him, if she loves him, and his determination to not only move on without her but to do so without eliminating her, is a major development in his character. This being capes comics, I'm sure it didn't last, but it was an obvious contrapoint to Vincent's mania and obsession with Cheryl. Kingpin is cold and brutal, but he loved Vanessa in a sane way.
If you haven't read the book, it's worth the effort to find it, though that's not too hard these days. It's on Amazon for as low as $4.91.
Posted by Thomm at Sunday, October 24, 2010