Parker The Outfit – A Review 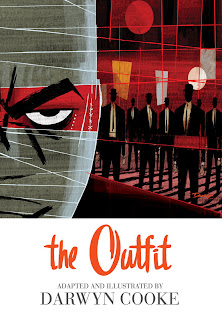 Parker the Outfit
Publisher IDW
Adapted by Darwyn Cooke
Format Hardcover 152 Pages of Story and Art
This was a great book. I absolutely loved it. The New Frontier was Darwyn Cooke’s seminal work in comic about super heroes. This is another seminal piece of work that is a love letter to Richard Stark and a masterpiece of illustrative fiction.
Parker is a man, pure and simple. He is hard as nails and uncompromising. He wants woman to f**k and he wants to do the next job to have the money to be able to enjoy the good life while it lasts. You cross him and you die, you try to push him or take him out, he won’t back down and you better have you will in order.
In a political correct world where we all have to act the “right way”, not hurt someone’s feelings, be afraid that if we look at a girl the “wrong way” we could be sexist and make sure that we acknowledge our feminine side, Parker is throw back. If you don’t like what he has to say, too bad. He is not a good guy, but he is a man without compromise. All the ugly truth of what being a man used to be about is what Parker exudes.
He lives a life that is on the edge and he lives like he could die tomorrow and given what he does I don’t think he wants to live a long life. He wants a world that he can live like a king for as long as he can and then he goes out and steals so he can live like a king again. He avoids killing innocents not out of some moral code, but to avoid getting a death penalty.
This volume chronicles Parker’s continuing war with the Outfit (read the mob). Parker changed his face to avoid detection and one night when he is with a woman named Bett a hit man comes in to take Parker out. He finds out he was fingered by one of the few people who knew what he looked like now. After Parker takes out the hit man Bett is sitting on the bed and we get this piece of purple prose from Richard Stark:

“Her name was Bett Harrow and she’d always been rich and never had a problem that wasn’t fashionable. That much Parker knew about her. That and the fact that in bed she showed a panther like craving for brutality. Her expression surprised him. Not fear or astonishment but breathless. Expectant.”
This is fantastic material. It is unrelenting, unforgiving, raw and gritty as hell.
Parker goes after the Outfit. He pushes back so hard and cost them so much money that eventually they relent and promise to lay off him. Of course Parker kills the guy who fingered him and he kills the Outfit guy who put the price on his head, but not before he made a deal with the number 2 guy to leave him alone once Parker ensures his promotion. It’s not like you can’t see how the plot of the story will go from the beginning; it is the journey that is the reward.
Another scene in the book is when Parker confronts the gut who fingered him. Parker points the gun at the guy and he starts to plead for his life. We were given the back story of how they had worked together recently. Since we are so programmed to the main character having a streak of good in him, even when he is the bad guy, I had a slight expectation that he might let him go. I read the first book so I also doubted he would. He didn’t, it was great, once someone screws you over, why would you let them live, if only real life could be that easy. What I enjoyed was the line after he shot: “It was an unreliable gun, Parker fired three times.” How unbelievable cold is that to pull the trigger, nothing, again nothing, third time – BOOM.
It almost makes you want to take up a life of crime and be that hard edged dangerous guy. A male fantasy to be sure, but one that is uncompromising in its maleness and revels in its testosterone laden abandon.
The setting being in the fifties is perfect also, no messy technology and geekness to deal with, the women are women and the cars are the huge stylish rides that were American cars.
Cooke also does a great job with varying styles of storytelling. When Parker asked his cohorts across the country to take out Outfit places, each robbery that is conveyed is told in a different story telling style.
Cooke is a master at pacing. The story and words work together in perfect harmony to create a book that moves fast, grabs you by the throat and never let’s go. It is also layered with tons of story, wonderful artwork and it made me go back and re-read some sections and other times just marvel at the layouts, page design and the art itself.
It has to be one heck of a job to figure out how to layout a story that is this long, what to keep, what to drop. It is an obvious labor of love done by an artist who is at the top of his game. When they do the movie, they can just shoot straight from this novel and it is done.
If there is a better graphic novel that has been produced I don’t remember it (unless it was Parker The Hunter). If you want capes and heroes stay away from this book. If you want a book with a hard edge star that so no mercy and is a guy in some ways 90% of the males in the US would like to be for at least a little while, this is the book. This shows how a graphic novel is done. This is a book you need to read.
GRADE A +
Next week back to the week in review.
Posted by Jim at Tuesday, October 26, 2010