A Sickness in the Family – A Review 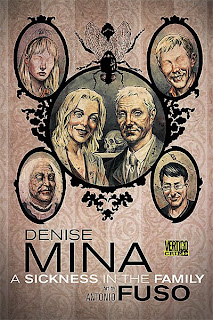 A Sickness in the Family
Publisher Vertigo
Writer Denise Mina
Art Antonio Fuso
Format Hardcover 178 Pages of Story and Art in B&W
Hey boys and girls I’m on a little vacation so due to timing neither this or next week will have a week in review. Maybe I’ll use the dormant tweeter account to give my thoughts on what I get to read. Still I did manage to read a couple of OGNs and thought I would use these days to give you my thoughts on this works of graphic fiction.
I love that Vertigo has commissioned so many graphic novels lately. Each one of these short stories has had plenty of positives and this one is no exception. From the first to the last page I got into the characters and enjoyed the twist and turns the story took. It was an interesting study of a family that was falling apart from the inside. Dad had recently sold his business and was trying to put his marriage back together. His one son wanted the money so he could continue to party and feed his drug habit. His daughter wanted the money to start her own business. The adopted son was hoping to get into a good college, Mom wanted out of the marriage all together and the grandmother wanted to go to a nursing home.
It was well paced and eminently readable; the art by Fuso told the story well and was some of his best art that I have seen. The story moved at a good clip and each character was defined enough to give us some feeling for who they are and for us to form an opinion about them. Still the book fell short of being great. It was an entertaining read, but not one that I would highly recommend.
The story for me fell down in its ending. The whole crux of the book is that it is a murder mystery. We begin with two people who lived on the bottom floor killing each other. Ultimately their story had no impact on the main story other than to serve as a plot device. Once they were dead, the father brought out that apartment and was combining the two into a larger home. This created a space in the floor, which started the whole sequence as the grandmother feel through the floor.
The grandmother is alive but had a stroke and is now apparently bedridden. The adopted son takes care of her while the rest of the family goes on with their lives and the constant squabbling. Mom is having an affair with the therapist. The daughter is desperate to open her own business and feels betrayed that her father sold the business instead of letting her run it. The one son is a heroin addict and the adopted son feels like an outsider. The family starts to die one by one and as they do we are left we only two suspects in the end, until the twist.
SPOILER ALERT
The grandmother did it. She killed everyone but the adopted son and set him up as the fall guy. She wanted the money to go into a nice nursing home.
It was too easy because the author had the doctors saying she had a stroke and now we are suppose to believe she faked it or got better really fast. Did she fake falling through the floor and pretend to be an invalid. Want was the point of showing us this dysfunctional family.
The story never gave us enough depth to the characters for us to know that the grandmother had that strong of a motivation. The rationale for why they adopted the second son was crazy also, it was due to the mother wanted another child and that would make her stay even though she wanted out of the marriage. The more I started to think about the logic of the book, the more the story comes unraveled. The characters were broad strokes with no real depth; the story while fast paced also lacked any depth or building of motivation. Many pages were wasted that didn’t serve the overall story.
Probably not worth the hard cover price at $20, but worth reading for some entertainment as a soft cover version for $13. I will say this much that it made me want to read one of Denise Mina’s novels, because I like to see what she can do with more space. It felt at times like Denise is still struggling in how to write a graphic novel with enough meat to it. In many ways I feel like this story was too ambitious for this format.
Posted by Jim at Tuesday, October 19, 2010