Lee: Well, not only is Thomm coming off the bench but he’s on the field playing. Welcome to IDW!
Thomm: As long as IDW doesn’t stand for I Don’t Wanna, we’re all good.

Doc Macabre #1 by Steve Niles (w) Bernie Wrightson (a & c)
Got ghosts in your garage?! Tired of those pesky zombies roaming around your front lawn? Have no fear! Doc Macabre, the one-man supernatural sweeper-upper, is here! There's no job too big for Doc, who, with the aide of his right hand man, er robot, Lloyd, will have you back resting in your lounge chair monster-free! (For a fee, of course!) Niles and Wrightson's latest opus begins here! #1 of 3, $3.99
Lee: If I understand, Avatar is the personal publishing house of Ellis and Ennis’s cruder work and IDW is the personal publishing house of Steve Niles. Niles seems to be pumping out a lot of material these days. All of it being 3 issue limited series. This is a tough call because I read most of this in trade format. I’m interested but three issues isn’t very long.
Thomm: Is there anything new in this genre? I read Dead, She Said and wasn’t overly impressed. I always like Wrightson’s art but not $12 worth for 3 issues. Maybe a collection of a bunch of these 3 issues stories into an anthology would be more enticing, for me anyway.

Iron Siege #1 by James Abraham and Andrew Hong (w) Trevor Goring (a) Tim Bradstreet (c)
WWII with a horror twist! An outfit of U.S. soldiers captures a group of Nazis led by a high-ranking SS officer. But when they come across a deserted town with a dangerous secret, they must forge an uneasy alliance to survive an unspeakable nightmare. It's Dawn of the Dead meets Assault on Precinct 13 in Iron Siege, a three-issue miniseries presented bi-monthly in Golden Age size. With incredible artwork by Trevor Goring and cover by Tim Bradstreet! Bullet points: Bi-monthly 3-issue WW II-horror miniseries in a Golden Age comic format! Covers by Tim Bradstreet! #1 of 3, $3.99
Lee: On the one hand, I love that this is oversized. Goring has been doing comics since the early 80’s with 2000ad before moving on to bigger and better Hollywood projects. From the few examples I can find, nothing big enough to link to, his art is very good. And, on oversized paper should be excellent to look at. But, the bi-monthly schedule is a killer and will crush any momentum the book will have. I’ll pick it up as a trade later.
Thomm: Nazi zombie fodder? Not bad. It’s at least something different, but it’s not leaping out at me as something to buy. Maybe it’s that BPRD and Hellboy have plumbed the Nazi/horror angle already or that outside The Walking Dead the zombies just aren’t much appeal to me.

Joe Hill's The Cape One-Shot by Joe Hill & Jason Ciaramella (w) Zach Howard (a) Howard x 2 (c)
Locke & Key: Keys to the Kingdom takes a month break in December, but in its place is another Joe Hill extravaganza! This special one-shot takes Hill's acclaimed short story from his best-selling short-story collection 20th Century Ghosts and adapts it to comics! The Cape will walk you along the fence of childhood innocence, and then throw you face first into a brick wall. Explore your dark side in this tale by Hill and Jason Ciaramella, with art and two covers by Zach Howard. $3.99
Lee: Hummmmm, as usual I am torn on this material. I really like Locke & Key, but Hill’s prose work left me cold. Not to mention that $4 for a one shot is just too much for me these days. I’ll wait and see what people say.
Thomm: Oh, don’t think you’d get off that easy. You’re supposed to buy both covers for a total of $8. I’m a little behind on my Locke & Key reading so I don’t know if it’s still being sustained as something to read. Besides, the promo doesn’t really tell me much of anything, unless I already know the short-story that’s the origin of the book.

Mystery Society Vol. 01 SC by Steve Niles (w) Fiona Staples (a & c)
Nick Hammond and Anastasia Collins are the Mystery Society and bring new meaning to underground cult status! Stealthily avoiding the authorities, this skulduggery duo spend their time and money righting wrongs committed in the world's underbellies. Now, experience the group's early exploits in this first collection from the mind of Steve Niles! $19.99. Visit Staples blog here. Read a five page preview of the first issue here.
Lee: Now this is how I like to read Steve Niles stories! It’s all collected in one place and has a good artist. The story itself seems to be more humor and action than horror which is always a welcome change.
Thomm: Well done, this could be a lot of fun. It certainly looks good in the preview, though it’s hard for me to read the text in that format. I’ll wait for the word on the street, though.
Lee: Actually, this is a collection of issues already released. You have to wonder how well it did when even we here at Comicsand... don't recognize a title. But, reviews were mixed. Basically, good humor, good action, but not clear motivation as to why the characters are together and why they are doing the things they are doing. 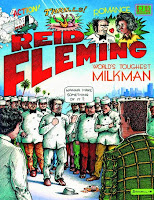 Reid Fleming: World's Toughest Milkman Vol. 01 HC by David Boswell (w & a & c)
David Boswell's classic counterculture icon is collected here in an oversized hardcover format. This volume collects the first Reid Fleming comic and the mini-series, Rogues to Riches, as well as Heartbreak Comics. Bullet points: A classic series that has gained cult status since its initial publication 30 plus years ago. Two volumes that will collect the entire run of Boswell's hilarious anti-hero! $29.99 Follow this link, scroll to the bottom and you can read the entire first issue for free.
Lee: Reid Fleming ROCKS! I can’t wait to get this. Created during the height of the Flaming Carrot craze, Reid Fleming is a comic masterpiece. It’s one of the early books that felt more like comix, than comics. Well, without all the adult content and drug references that is. I highly recommend checking out the first issue.
Thomm: This would be something for me to check. I remember reading about Reid Fleming but I never picked up any issues. This is a good way to start.

The Suicide Forest #1 by El Torres (w) Gabriel Hernandez (a & c)
Just outside of Tokyo lies Aokigahara, a vast forest and one of the most beautiful wilderness areas in Japan... which is also the most famous suicide spot in the entire world. Legend has it that the spirits of those many suicides are still roaming-haunting deep in those ancient woods. This series from the creators of the acclaimed The Veil examines the lives of Alan, an average worker from Tokyo and his rather unhealthy relationship with Masami, and Ryoko, a forest ranger who recovers the suicide victim's bodies from the woods. We discover that behind Ryoko's unconcerned surface lies a secret, and these three lives will be forever changed by the darkness waiting for them in the Suicide Forest. #1 of 4, $3.99
Lee: Torres and Hernandez , creator’s of last year’s horror masterpiece The Veil, are back with more gory goodness. The Veil was very, very good and that makes this an easy buy. I’m sure the simple hype above isn’t doing this story justice.
Thomm: Alan? The lead character's name, in Japan, is Alan? Ok. I can’t speak to The Veil, but a comic about a forest ranger whose job is to retrieve the bodies of suicides has a lot of potential. Not sure he’s the focus, though.

Train Me, Gamble Vol. 01 SC by Rudy Solis (w) Santiago Espina (a & c)
Andrew Smith, the world's largest monster bad-ass, has been given the task of defeating Admiral Porter, a military sociopath bent on ruling the planet Fistful. There is only one problem: Andrew can't fight worth a damn! In order to ensure his victory, he seeks out martial instruction from the greatest fighter in the galaxy: Gamble, a 10,000-year-old, jive talking, hard drinking, fast living man who doesn't look much older than a kid. Hilarity and large amounts of violence ensue, culminating in a climactic coming of age story set in the fun as hell future. Bullet points: A cross between Incredible Hulk and Rocky, Train Me, Gamble is an action packed, comedic tale that will prove even a monster can be a hero... $17.99 Visit Rudy Solis here.
Lee: And yet another book that I’m on the edge about. The story sounds good but a monster named Andrew doesn’t sound exciting. There’s a very large disconnect between my image of largest monster bad-ass and the name Andrew. Maybe that’s part of the humor, I don’t know. A bigger problem for me is that I can’t determine if the art is going to be any good. I’m too big an art guy to take a chance on this without a preview or two.
Thomm: You pick up on Andrew but not Alan? The promo throws out a lot of trite phrases that don’t make sense in the context. How can Andrew be a bad-ass if he doesn’t fight? How’s it a coming of age story of we don’t know Andrew’s age? Whatever. Sounds more like a cross between Of Mice and Men and Rocky and Bullwinkle.

Thomm: Nothing’s really jumping out at me here as something that’s “have to have”. I need to get me some more Locke & Key, though. Reid Fleming would be next on the list.
Lee: Not the usual over the top, this is awesome month from IDW but still very strong. As they say, there is something for everyone.
Posted by Lee at Friday, October 29, 2010