The Thanos Imperative #5 - A Review 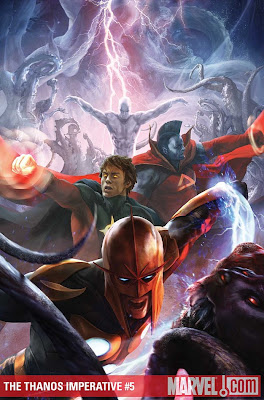 This is an impressive comic book.

It shouldn’t work, but it does magnificently. You see, the problem with comic book crossovers and big events is escalation. The companies have to constantly top the previous event or risk fans yawning and just talking about how it doesn’t compare to what they were reading last year.

The Thanos Imperative is the 4th event in the most recent cycle of cosmic Marvel events. Thus far, we’ve had the Negative Zone invade the Marvel Universe, Ultron conquer 1/3rd of the Universe with the Phalanx, and two galactic empires go to a war that was only ended by an explosion big enough to literally crack a hole in the universe. It is, understandably hard to top all of that.

So now, we have another universe, the Cancerverse, invading ours, only this time it’s a perverse reflection of ours where, via Lovecraftian gods, life has won and nothing dies. The execution of this idea has been surprisingly creepier than you’d expect, but thus far the Thanos Imperative has been solid, but outside of a few shining moments (the Galactus Engine! It’s a gigantic missile built out of Cancerverse’s Galactus’ corpse! And it destroys celestials on a conceptual level! It’s the sensational character find of 2010!) its been good, but not spectacular.

That all changed with this issue. It not only feels like a worthy successor to the crossovers that came before it, but it tops them in magnificent style.

The fight in the main universe looks increasingly hopeless, as the Galactus Engine makes mince meat out of our universe’s celestial beings and the Kree and Shi’Ar fleets and worse creatures are on the way. The Cancerverse Mar-vell has taken the Cancerverse Avengers (the Revengers!) back home to go stop Thanos, who is our universe’s only hope, which is never a situation you want to be in. Nova goes on a last ditch mission to help, leaving our universe’s cosmic defenders to hold the line against an unstoppable enemy. And it all ends with a shocking ending that genuinely has me worried about how this book is going to end for our daring heroes.

This issue does an outstanding job in raising the stakes and creating an atmosphere of doom. You really feel like this book is going to have consequences, and given that we’re dealing with Marvel’s c-list, the possibility that our favorite characters may not make it out alive is very real. We only have one issue left, and as of the last page, our heroes are massively, incredibly screwed.

All due credit goes to writers Dan Abnett and Andy Lanning, who have managed to turn Marvel’s cosmic books into some of the best comics on the market over the past couple years. They have repeatedly written excellent crossovers in this area of the Marvel universe, but this one looks set to top the rest. It all feels very final, and while I’m sure cosmic Marvel will be around in some form, I hope they’re a part of it.

Credit is also due to artist Miguel Sepulveda. His art has looked good throughout the entire series, but it often appears a bit posed or stiff. This issue, however, is his best yet. The characters look fluid, the action is dynamic, and he excels at depicting the insane variety of cosmic weirdness that Abnett and Lanning have thrown his way. The book looks and feels like the fate of the universe is on the line and Sepulveda is a big reason why.

I’ve been enjoying the Thanos Imperative so far, but this issue really elevated it in my eyes. Issue 6 is definitely going to the top of my pile whichever week it comes out.
Posted by Greg at Thursday, October 14, 2010