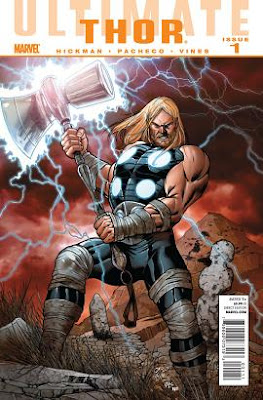 Come with me, Comics And Other Imaginary Tales-a-teers! Journey with me through the mists of time to a time, way, way back to the early 2000s, when Marvel’s Ultimate line was still exciting and new!

Remember how cool Hitch drawing Cap in realistic looking WWII gear was? Or how good that whole issue of Peter confessing his identity to MJ was? Or that time when Captain America kicked the Hulk in the balls? Man, thoooose were the days.

Since then, despite the enduring quality of Ultimate Spider-Man under Brian Bendis’ pen, the Ultimate line has kind of fallen by the wayside. What started as a groundbreaking line with fresh and unexpected takes on classic Marvel characters has degenerated into the kind of boring predictable comics it was created as a response to. It embraced gimmicks that were contradictory to its original reader friendly/no continuity mandate like renumbering and crossovers. Jeph Loeb and his pack of interns from Heroes didn’t help things much either. Yes, Ultimate Spider-Man has remained consistently good to great, but it’s so consistent, we can often forget how good it really is. Again, the Ultimate books, as a whole, haven’t seemed new and interesting in a long time. Ultimate Thor looks to change that.

Written by Jonathan Hickman and drawn by Carlos Pacheco, it is the freshest thing to come out of the Ultimate imprint in ages. The story is relatively simple. The European superpowers are worried about their investment in Thor and have called in a psychiatrist/linguist named Donald Blake to help him out. Meanwhile we flash back to the last days of Asgard, as the Nazis prepare to attack.

The book throws in a lot of familiar elements: Nazis, Thor’s time in Asgard, the European superpower project, the potential of Thor being insane, etc. But putting them all into his origin story makes it feel markedly different than anything we’re used to seeing from a Thor origin. While this all works well, its Hickman’s little touches that set this apart. Loki’s unique characterization as a friendly brother to Thor, the depiction of Mjolnir as the ultimate weapon on Odin, and the Frost Giants in Nazi uniforms all make this feel fresh. Another bit I loved was Thor writing the story on the floor of his room as a poetic edda, an ancient way of telling Norse Mythology. It’s a small thing, but its attention to detail like this that makes the book shine.

When my buddy Shawn reviewed this book, he said it was the most complete thing that Hickman has written for Marvel yet. Hickman incorporates his big ideas, his interesting take on design, and a complex story all into this book and it works extremely well. It should come as no surprise that Carlos Pacheco knocks this one out of the park as well. He even manages to make the characters’ posture visually dynamic.

Ultimate Thor is good comics and it is the first Ultimate book not written by Bendis that I has left me really looking forward to its next issue in a long, long time.
Posted by Greg at Thursday, October 21, 2010