Boom! Studios
Darkwing Duck Classics Vol. 01 SC
Collected for the first time ever - the original Darkwing Duck series that fans have demanded! Here's your chance to rediscover the daring duck of mystery as he gets downright dangerous in his very first comic book escapades, not seen in over a decade! Delight as the Disney Afternoon Revolution takes you on trip down memory lane as Darkwing Duck battles his most famous foes, and learns the ropes of fatherhood, all in this 160-page volume! $12.99
Lee: I ended up recommending the Ducks so many times in a row that Jim said I had to stop. But that only applied to SCROOGE! Bwah ha ha, it never applied to Darkwing Duck. While I didn’t watch the original cartoon, I know this has a small but loyal following. I’m betting this is better than average and full of entertainment. I’m all over this.
Gwen: Wow this is great - I think I have to get this as a Christmas present for a friend who used to have all of this cartoon series recorded on VHS. Awesome. 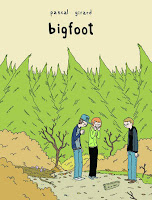 Drawn & Quarterly
Bigfoot HC by (W/A) Pascal Girard
Jimmy is a teenager in a crummy little town. He's got a lousy best friend, a porn habit, and an uncle whose miserable existence is the embodiment of life stalled in its tracks. He's also got a tender soul, a pure-hearted crush, and the makings of a budding artist. A horrible YouTube video of Jimmy dancing in his living room becomes viral and makes every sweet and hopeful thing about Jimmy seem utterly pathetic. Everyone from fellow classmates to the clerk at the corner store has seen the video, and Jimmy finds himself a celebrity in his town, just for the wrong reasons. $19.95 A preview of Bigfoot can be found here.
Lee: I’m not sure if it’s the best analogy but Girard’s art reminds me of Jeffrey Brown’s. It’s not perfect, and it’s somewhat crude, but it’s perfect to tell this type of story. This sounds like a great story and I’m sure you won’t be disappointed with it.
Gwen: This does sound like a good story and I'd be interested in picking it up. 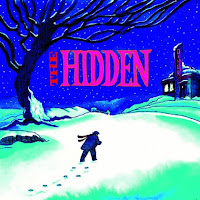 Fantagraphics Books
Hidden HC by (W/A/C) Richard Sala
Eight desperate people are stranded at a snowbound diner. Their phones can only pick brief and perplexing bits of conversation. The radio is filled with static - although occasional, broken-up bits of news are heard - reports of some sort of global catastrophe... A ninth person arrives, hiking to the diner from his stranded car, where he had been listening to his car radio. He informs the others that, yes, from what he was been able to make out, something alarming seems to have happened, a catastrophe on a global scale Oh, and one more bit of local news he happened to pick up, he says: The previous night an inmate escaped from a nearby hospital for the criminally insane, after killing his doctor and several bystanders. The police warn that he is very, very dangerous... What perhaps sounds like the description of an old weird tale or an episode of The Twilight Zone is actually just the beginning of the new suspenseful, brain-twisting graphic novel from Richard Sala. $19.99
Lee: I loves me some Richard Sala and he will always get a spot in the indies listings! Sala is one of the modern masters of macabre horror stories and he never fails to disappoint. This book is in full color and sounds great. I can’t wait to get it.
Gwen: This looks excellent! And I love the cover art, the colors are vivid and the art conveys a lot of emotion with a single scene. I'll definitely need to find a copy of this book.

Stigmata HC by (W) Claudio Piersanti (A/C) Lorenzo Mattotti
He lives day to day and hand to mouth, this shambling lug of a man, wrestling with his demons, picking up work where he can, and drinking himself into oblivion. Until one days his palms begin to bleed These newfound stigmata lose him his job, and he ends up as part of a traveling carnival, where he even finds love. But his past catches up with him -violently so. Has he lost his last chance at redemption? This stunning graphic novel, executed in a mad, expressionistic swirl of black lines, is the result of a unique collaboration between the preeminent Italian cartoonist/graphist Lorenzo Mattotti (RAW, The New Yorker, and the graphic novels Fires and Dr. Jekyll and Mr. Hyde) and the award-winning Italian screenwriter Claudio Piersanti. $19.99. Visit Mattotti’s website here and a bio here.
Lee: Mattotti’s art is more than enough to sell me on this material. It’s absolutely stunning. He’s a true artist and getting the opportunity to see him do comic art is a chance I can’t pass up. This is for every art lover out there.
Gwen: This looks like a very surreal book - while intriguing I'll pass. Lee can let me know how it turns out.

Humanoids Inc
Pandora Eyes HC by (W) Vincenzo Cerami (A) Milo Manara
Pandora is gorgeous, until her uncontrollable anger makes her eyes piercingly evil. Shortly after therapy has cured her, Pandora is kidnapped and thrown into a crime-filled conspiracy that's connected to her mysterious past. By legendary cartoonist Milo Manara and Vincenzo Cerami (co-writer of the Oscar award winning Life Is Beautiful). $19.95
Lee: It’s Manara. It’s an oversized hc. And, the plot sounds like the lead character might actually keep her clothes on for the entire story. This is probably a good place to start if you want to see what all the Manara hype is without having to worry about who sees you reading it.
Gwen: Um... that doesn't sound like a great plot there - her eyes go evil but then she's cured? I mean I feel like I've already read that part of the plot now...

Image Comics
Marineman #1 by (W/A) Ian Churchill
Steve Ocean is Marineman! A marine biologist and TV presenter; a man blessed with good looks, a good job, a good circle of friends and a life many would aspire to. But Steve Ocean also has a secret-a secret, which, if revealed, could throw his whole life into disarray! With underwater action and adventure all the way, Marineman may just turn out to be the comic book you didn't know you were missing! $3.99. Visit the Marineman blog here.
Lee: So, let me see if I can guess the secret that will destroy Marineman’s life: A: he’s really gay B: he’s really a clone or C: He is actually a she who used to be a he and secretly loves a fish which is neither he or she. I really like Churchill’s new art style and I like Aquaman so maybe this would be a good substitute. But Churchill has never be able to stay on a book longer than 4-5 issues before becoming chronically late and I’m sorry, but the secret that will destroy his life thing, is just cliched. This is good on paper but I think it’s an iffy purchase at best.
Gwen: The cover is a bit cartoony for me. Also he does look an awful lot like Aquaman. This is a pass for me - like Lee said, the major plot hype is very cliche.