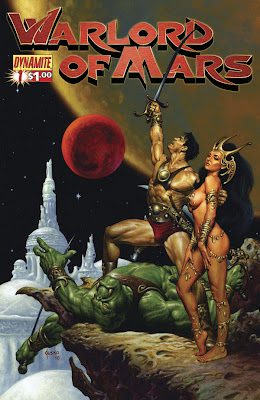 Format: 22 pages of story and art plus 2 pages of backmatter

Last week when I mentioned this book I hadn't had time to read it yet and was basically judging it by the awesome Joe Jusko cover (I like the logo too). Later when responding to Gwen's comments on the post, I mentioned that I really liked it. First impressions being what they are, it was enjoyable, but that's not to say there weren't some problems too.

Let's focus on the positive aspects of the book first. It seems to be a trend these days (at least with Vertigo titles) of having the first issue be only a buck. That's a great way for people to try it out with little to no risk. The cover alone is worth that price. The book's full size too. I really liked the opening narrative page, which felt like it was lifted right from the novel (as I remember it anyway). So, that put me in the right mood right off the bat. The closing "backmatter" page talking about finding the manuscript and Carter's instructions of his burial tomb, equipped with ventilation was also nicely done. This is another important element from the novel that shows the creators know the source material well. All in all it reminds me of the formatting of Dark Horse's Conan. That's the storytelling style of today, which is fine. This leaves less captions in the book itself (like the Marvel series) and more time for fighting!

And boy is there a lot of fighting -- bloody fighting too. The story is pretty much evenly divided into a John Carter tale (still on Earth) and a Tars Tarkas tale. Both of which are providing a good backstory for when the two eventually meet, which will probably be at the end of the first arc.

John's in an Arizona saloon with another former Confederate buddy when four US Calvary men come in and start making trouble. It seems like John's going to take the high road and avoid a conflict, but when they insult Virginia he starts shooting at them -- lethally. I'm a Virginian by birth and I still consider it "home", but I thought it was an extreme reaction. When he challenged them, they did put their hands on their guns, so I suppose it's a Han/Greedo pseudo-self defense action, but it degraded his character a bit to me. Luckily for him, the owner is an ex-Rebel too (who finishes the leader off), so he's going to tidy up their killing spree and claim that Indians did the soldiers in. Turns out those soldiers were scalping Indian children, so they were really "bad guys" and probably deserved some swift Western justice.

In the Tarkas story we have him rescue some young Martians from the white apes. There's a nifty four-armed decapitation of one of them. Like I said -- lots of blood. It seemed a little excessive to me, but it wasn't so bad that it made me not want to read the book. Tars also liberates a female Martian, who showed fear (a bad thing in their society) -- so there will be a coming conflict with him and the Martian chieftains.

It's a solid, entertaining set-up story with lots of action and the art is very good. I like the figure work and the variety of POV in the panel compositions. Stephen has a lot of talent and it looks like he's a good fit for this title. However, he has some trouble with his consistency from panel to panel. Here's an example:

On page4 we have the top panel with the four US officers facing us with the bar behind them. The leader is the second one from the left. The guy furthest to the left has a non-Calvary hat and a red bandanna. The leader is holding a drink in his left hand. Second panel, the bandanna guy then whispers into the leader's left ear and is shown on his left, when he was on his right. Now most likely the two turned around and are now facing the bar in this panel, but there isn't enough information (background or the bar itself) to make that clear. I was just thinking how did he get on his other side with the bar behind them. In the third panel, the leader slams his drink down with his right hand, instead of his left. Again, he probably switched hands off panel, but it seemed wrong to me at first and I shouldn't even have the impression that something is out of whack (even if it really isn't).

Over all I like the face work, but Carter's buddy and the bandanna guy look too similar, so part of the time I wasn't sure who was getting shot. They both have bandannas too. There are also a couple of scenes where John looks like he has a mustache. In the Tars Tarkas section, we've got one Martian called Tars and another with a broken tusk called Tarkas. That really confused me, since I'm reading a story about Tars Tarkas. Tarkas might be an official title or something that Tars will eventually earn or win, but if it is then I didn't remember it and it wasn't explained.

I know I'm making some nitpicking comments for a book I did like, but those elements did distract me while I was reading the story, so I think they're worth mentioning. All that can be fixed with a little more hands-on editing and I think this has the potential to be a really good series.

Grade B-: An entertaining read and a good start to the series with a few flawed elements that I expect to disappear as the creative team gains more experience.
Posted by Matthew at Saturday, October 23, 2010