The fall of the LOSH

I am a Legion of Superheroes fan - big time.

I have followed the Legion through many ups and downs and even cringed my way through Giffen's fat creepy Brainiac5. I have loved the many versions of the Legion even though many new versions completely changed things I had loved about the Legion. I mean - I loved the Brainiac5/Supergirl romance growing up. I was a great love story and I'm very attached to it. Yet when Mark Waid started (quite possibly as a joke when you go back and read some of the stories) the Brainy/Dreamgirl romance I grew to like that story as well. Sometimes my tolerance for rewriting my favorite characters is pushed too far. Levitz has done that in my book and with (essentially) the original Legion nonetheless. At least if it was some tangent Legion and not the core one I grew up with it would be easier to accept them as different characters but it feels like the current Legion isn't the Legion I grew up with at all - but it's pretending to be!


After all my years of Legion loyalty what, do you say, could push me over the edge? Well as much as the major story lines were not inspiring me it was Shadow Lass that was the final straw. Shadow Lass has never been a truly major character in the Legion - she had the occasional solo or background story but she was mostly a side character. Maybe that's why Levitz decided to use her for his plot - but really, despite her sometimes second or third tier status, I've always really liked her as a character and I'm sure I'm not alone. Shadow Lass always had a thing for Mon'el in all the older Legion stories. In more recent memory Shady and Mon'el were traveling everywhere together and still seemed to be a solid couple. Then, all of a sudden, the new Legion series starts up and Shady and Mon are broken up. No explanation or anything. 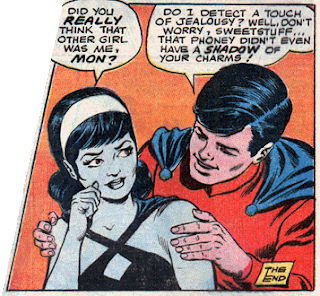 I dealt with this - I thought, hey, why not keep reading, maybe there's a story behind this that will be revealed later. Well... I guess it's been revealed. I swear I almost threw up. Earthman and Shady sleeping together - REALLY. I mean, ew, and totally ruined how I felt about Shady as a character. Ugh.


This just topped off how I had already been feeling about the latest Legion series. It becomes harder every issue to read this book and I find that the book has 1. not found a direction 2. had a disregard for the characters in regards to what the fans enjoy about them and 3. lost it's sense of fun. I find myself missing the Waid/Kitson Legion as that at least had the merit of being a whole lot of fun to read even if it wasn't the Legion I first fell in love with.


Someone give me a call when the Legion is good again. I can't take the current Legion for much longer. I'll go back to reading my archives and trades for now.
Posted by Gwen at Monday, October 04, 2010