So, the library selections continue. I think I'm going to keep working in order of what I liked among these selections first, finishing up with the couple that were just really bad.

Which means that Rat Catcher, by Andy Diggle and Victore Ibanez is one of the better choices. Hard boiled is definitely a fitting description for this book. The bodies are stacked left and right, and fetuses aren't safe, either. 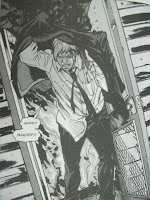 The Rat Catcher is a legendary mob enforcer, capable of finding and taking out informants who are in FBI protective custody. The story starts with a burning house in West Texas. A man bleeding from the right shoulder stumbles out of the burning house, car jacks a man, and disappears.

FBI Agent Moses Burden comes on the burning house as two local sheriff's deputies stand around waiting for fire fighters to show up. Burden lights a fire under them when he tells them it's an FBI safe house. Burden's partner, Patrick Lynch, may have been at the house when it was set on fire. Lynch was sleeping with one of the other FBI agents guarding a Mexican informant. 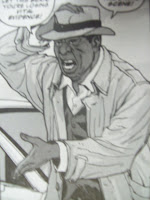 Burden is an older, black man with a son in long term medical care from injuries suffered in an accident with a drunk driver. He looks tired.


The target of the FBI and the federal prosecutor for West Texas, is a white supremacist mobste 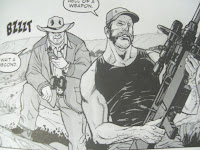 r named Rawlins. He's been impossible to catch because he's got the Rat Catcher. Any time there's an informant against him, the informant is eliminated before going from FBI custody to US Marshalls custody. As a result, two US Marshalls who were going to take custody of the now late Mexican informant are also in on the FBI investigation, much to the FBI's chagrin. 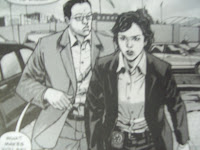 It's a bloody trip, and I'm guessing there are 3 guys hanging upside down in a meat packing yard still, alive but bruised. Diggle sort of left those guys hanging, literally and figuratively. 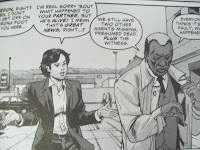 pathy for any of the characters. Lynch is the most sympathetic, what with his pregnant girlfriend being killed and the whole of the West Texas FBI about ready to shoot him, but he has no personality of his own. He's a man on a mission to solve who is the Rat Catcher and avenge his dead girlfriend, but otherwise he's a cypher.

I suppose that's not really true. The most sympathetic character in the book was Marshall Switzer. She had personality that the others really didn't. I'd have liked to read more about her, but she's mostly tagging along with Agent Burden as the brass at the West Texas FBI hope she and her partner don't get too involved in the agency's dirty laundry that has resuled in two dead agents and a dead witness. 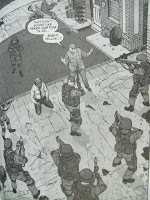 The eventual reveal of who's the Rat Catcher is well done. It's not entirely a surprise, some well laid clues having been left by Diggle, but it's not pat and expected, either.

Ibanez provides really superior art for the story. He has well tailored individual faces and body types, does a broad range of facial expressions and body positions, and brings the story to life. The shades of grey in this black and white work are more in the writing than the art but are nonetheless put to good use.

A very entertaining read, particularly if you're a fan of the old school crime stories or Darwyn Cooke's adaptation of the Parker stories.
Posted by Thomm at Sunday, January 22, 2012