Indies Previews For March Part 2 of 3 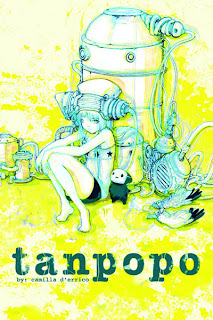 Celebrated creator Camilla d’Errico delivers a stunning visual journey exploring emotion, self-discovery/innocence and what it means to be human. Tanpopo is superhumanly intelligent and inhumanly emotionless. Attached to a mysterious machine and ruled by her vast knowledge, one day her heart rises up to struggle against her ruling mind. Torn and confused, she now seeks humanity, longing to feel what other humans feel. Each chapter of Tanpopo is inspired by a classic piece of literature or poetry, woven into its own epic story, and contained in this beautiful hardcover edition. $24.99 You can visit d’Errico site here comics.html and the official Tanpopo site here.
Lee: How did Boom! manage to snag this property? It’s a great job because it’s certainly outside of their normal offerings. The usual comments apply, great art and what appears to be a really moving story. The bonus in this case is that d' Errico is a proven creator so we already know it will be good.
Gwen: This looks great! Good move for Boom! The art looks wonderful and I know quite a few people who I'll have to pass this along to.

Another 7 books below the jump... told ya there was lots of good stuff this month.

Angelman: Fallen Angel HC by (W/A/C) Nicolas Mahler
Angelman is Austrian cartoonist Nicolas Mahler's sardonic take on super-heroes, their fans, the businessmen behind them and the current media obsession with them. Rendered in spectacular color and featuring Mahler's ultra-minimalist style and drier-than-dry wit, Angelman will occupy a place of pride on the bookshelf of any comic book geek - or anyone who just likes hilarious comics. 96 pgs, FC, 7.75 x 9.75. $18.99 Visit Mahler’s site here.
Lee: Fantagraphics always has diverse offerings and this is no exception. Mahler’s art is certainly minimalist! But, even with his economy of line he manages to tell a heck of a story and make the lines really expressive. This should be good.
Gwen: I think I'd have to know a bit more about the premise before picking this up. 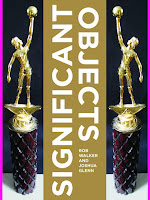 Significant Objects SC
Edited by Joshua Glenn and Rob Walker. Significant Objects features 100 short stories written by such literary luminaries as William Gibson, Curtis Sittenfeld, Sheila Heti, Colson Whitehead, Nicholson Baker, Meg Cabot, Gary Panter, Ben Katchor, Lydia Millet, Jonathan Lethem among others, about - yes, significant objects! The concept behind Significant Objects began in 2009 as an online inquiry to see if commissioning great stories about common geegaws would increase the objects value - as measured in actual eBay auctions. The experiment, in short, was a smash hit. As will be the Significant Objects book. 232 pgs, FC, 6 x 8, $24.99
Lee: This sounds like a hoot! At it’s most basic, you lie about the history of some piece of crap you have laying around your house and it will sell for $10 extra dollars on eBay. I am soooo curious what the stories are that could do that? Then I wonder about the intelligence of the people who bought them. Either way, this sounds like an interesting book.
Gwen: Hey, if something has a story it makes it more interesting. I may be biased as an archaeologist of course, but context makes a difference.

Lee: Yep, this is gonna be strange. As always, I love the art. It has a certain appeal. It feels flat but full of depth and texture at the same time. As for the story, all of the books from the Ignatz line have been great so I am sure this will be too. If you’re looking for something different…
Gwen: Yeah, this does qualify as different. Not my cup of tea but the art is intriguing. 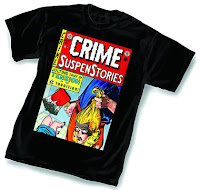 Graphitti Designs
EC Comics: CSS #22 by Craig T-Shirt (XL)
One of the greatest examples of controversial graphics from the 50's takes center-stage this month on the new E.C. Comics: CSS #22 T-Shirt. Features the gruesome art of Johnny Craig screenprinted in full-color on a black 100 cotton shirt. How do you spell relief? $18.95
Lee: I’m not really sure where to start with this item. If you buy it, where exactly do you plan on wearing it? What message are you trying to send with a shirt like this? Dahmer is my role model????
Gwen: Maybe you're wearing it to try out for a role on Law and Order or Criminal Minds as a bad guy?
Lee: Although… if it were a XXL or even a XXXL then it would just look like the killer was hacking up a watermelon so that might not be too bad.
Gwen: I wonder if this would be a banned shirt high-school wise.

Ichiro lives in New York City with his Japanese mother. His father, an American soldier, was killed in Iraq. Now, Ichi's mom has decided they should move back to Japan to live with Ichi's grandfather. Grandfather becomes Ichi's tour guide, taking him to temples as well as the Hiroshima Peace Park, where Ichi starts to question the nature of war. After a supernatural encounter with the gods and creatures of Japanese mythology, Ichi must face his fears if he is to get back home. In doing so, he learns about the nature of man, of gods, and of war. $19.99 Visit Inzana here.
Lee: This just looks fantastic.  I thought Inzana's art would be more... manga-ish maybe?  It isn't anything like that.  It's very sleek and stylistic which totally appeals to me.  The story sounds very, very interesting too.
Gwen: I'd be willing to give this a shot just for the historical perspective. Oh, and the mythological aspect as well.

Humanoids Inc
Monsieur Jean Singles Theory HC by (W/A/C) Phillippe Dupuy
Monsieur Jean is back in this stand-alone volume, published in English for the very first time! At once continuing the adventures of our favorite Parisian bachelor and that of his entourage, this beautifully designed two-tone title also further explores the dreams and nostalgia that invariably come with adulthood. $24.95 See a sample page from the previous Monsieur Jean collection here and you can read a very old, poorly written review of the Mr. Jean collection here.
Lee: Monsieur Jean is just OUTSTANDING. I have a collection of his earlier stories and it just blew me away. Great art and an incredibly human story. This is a must buy for me.
Gwen: I'll take Lee's word on it. I wouldn't have given it a second glance on my own.

Megalex Complete Story HC by (W) Alejandro Jodorowsky (A/C) Fred Beltran
On the planet-city of Megalex, urban sprawl consumes the entire planet, leaving only a few bastions of nature on the planet. Megalex's drug-addled citizens are always searching for a distraction, even the battle Megalex wages on the planets' environment is seen as giddy entertainment. That all changes when a clone, known only as the Anomaly, is born and rescued from certain destruction by the beautiful Adamâ and her fellow freedom fighters. With the forces of nature on their side, the Anomaly and Adamâ fight to end the stranglehold Megalex has on the planet. $29.95 read Beltran’s bio with some art samples here. and you can read the Euro version of hype (in Italian) here. You should still check out the link because the art samples are amazing.
Lee: Jodorowsky is a European Grant Morrison. No I don’t consider the UK to be part of Europe. Anyway, Jodorowsky’s books are always filled to the brim with incredible over the top ideas that defy not only explanation but expectations too. Morrison’s failing is that things tend to happen off panel in order to make room for the next idea. Jodorowsky’s failing is that the ideas are on panel but rushed and sometimes have little explanation in order to get to the next idea. No matter what it’s always good. The art, I highly recommend the Italian site, is mind blowingly good too.
Gwen: I think one Morrison is more than enough for me.

The last batch of books on Friday.
Posted by Lee at Wednesday, January 25, 2012