Spider-man Noir: Eyes Without A Face

Ok, I've got a slew of library books to go through. Most of them I'm less than fond of, which is better than me being less than fond of after having bought them, but I'm going to start with one I liked.

It's somewhat surprising that I like this because I've generally 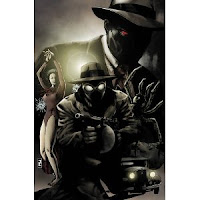 been down on Spider-man of late. Peter Parker is just too whiny for me anymore. But, in David Hine, Fabrice Sapolsky, and Carmine di Giandomenico's work, set in 1933, the whining is nowhere to be found. It's a wonderful change.

Sure, we have Peter in non-traditionals Spider-man duds, and Felicia Hardy channeling one of the many incarnations of Selina Kyle, but there are some really creative turns in this noi 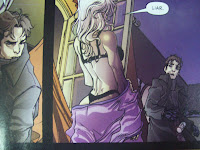 r tale. In fact, the most cliched part is Hardy being a speakeasy operator/madam, sleeping with both Peter and a villain in the story.

The Goblin having been taken down as the crime boss of NYC in the last Noir series, there's a new boss in town called the Crime Master. He's exerting his authority in typically brutal fashion. Concurrently, Robbie Robertson, son of Carver Robertson and a reporter at The Negro Times, wants to investigate the experiments of Dr Otto Octavius out on Ellis Island, but the good doctor won't give an interview to a report from a black pape 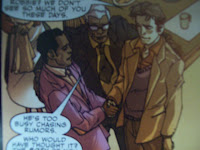 r. Robbie convinces Peter to get an interview, which the doctor grants due to Peter's scientific background, and Robbie tags along.

This version of Doc Ock is a wheelchair bound genius who has mechanical arms attached to the back of his chair, which he manipulates with a controller on his chair. They're not attached to him or controlled by his mind. Doc Ock is running experiments on monkeys by cutting into their brains to see what can be done to 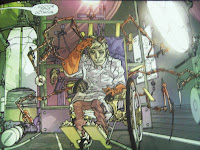 modify their behavior without killing them. These are his government funded experiments.

On the side he's also experimenting on black people kidnapped from the streets of NYC by the Crime Master's gang. Of co 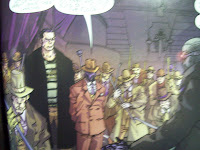 urse, both Crime Master and Doc Ock are working for the local Nazi sympathizer group.

Peter defeats the Crime Master and Doc Ock, though Doc Ock is only deported to Germany. Amusingly, he's rejected by Heimlich Himmler and not allowed to do any work for the Nazis because he's a congenital cripple. They just can't have any birth defects in the perfect Reich.

In the course of the story Felicia is moved toward the path of being the Black Cat, Robbie is severely injured, and Curt Connors makes an entirely superfluous appearance as a Nazi.

The art by di Giandomenico is rough at times, but works well with the noir setting. His colors, as well as those by June Chong for issue 4, have the expected sepia tones, with some bright colors thrown in for emphasis on occasion.

I liked the character work, especially Carver Robertson, Peter, and Aunt May. Aunt May, in particular, isn't the usual victim she seems to be in so many mainstream Spider-man stories. She's busy with her own life, runs a soup kitchen, and generally seems much more proactive.

I don't know why Curt Connors was in the story at all. He's his expected one armed self, but he's just another Nazi scientist. What's the point in bringing him in? He doesn't do anything in particular but get caught with Doc Ock. Guess he didn't get deported, though. 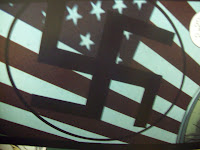 I question a bit of the timing on the Nazi angle, too. This story is set in 1933. At that point the Nazis were just consolidating power in Germany. A sophisticated operation in the US, to the point of taking over crime in NYC, was likely well beyond their operational capabilities at that point.

Still, this was a pleasant surprise. If I see the first Noir series at the library, I'll be sure to check it out.
Posted by Thomm at Sunday, January 15, 2012