I really need to figure out how to get on a regular schedule with this post because it’s been 2 weeks since I last wrote anything. Part of the problem is the general nuttiness of the home life, work, and pure exhaustion. Oh well, I’m back now.

I actually started the month with one of the best feel good, left me happy, books that I have read in a long time. I found happiness in Chip, written and illustrated by Richard Moore, published by Antarctic Press. $15, 128 pgs
Richard Moore is probably best known for his other outstanding series Boneyard from NBM. This is much the same without the innuendo. In short, funny, charming, quirky, and ‘palate cleansing’ after reading some of the doom and gloom that I normally read. You can read the long review here.

Below the break Witchdoctor: Under the Knife, Smurfs Vol 1, Monster Mess and cult favorite Chase by J.H. Williams III

Witch Doctor has been developing a little buzz and I can see why. Seifert writes a solid story which is a cross between Bones and Fringe. Ketner is incredibly talented considering this is probably his first comics work. Engaging characters, fun situations, and art that reminded me of a young Tom Mandrake made this a winner. You can read the long review here. 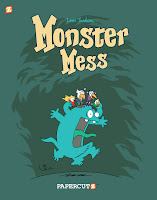 Peter and Jean’s parents are cartoonist that have magic dust, which when sprinkled on a drawing bring the drawing to life. So what do a pair of mischievous kids so with magic dust? Why they draw monsters and bring them to life. But when the monster is mean, then it’s up to Mom and Dad to draw a friendly monster to save the family. That’s where Kriss comes in. With three legs, four arms, and ten mouths, can he defeat the evil monster? Maybe, but only with Mom and Dad’s help.


Trondheim is one of France’s greatest cartoonist with a perfect sense of comic timing. I’ve been reading his material for years and snatch up anything new from him. This is an all ages book that I read myself, then with the kids. What makes this book so perfect is the fact that the children narrate the tale.  It's full of "oohhh then Dad got mad" and a perspective that will make you remember what it's like to be a child.  Tiny and I read it together the other night and she gave it a big thumbs up.  There is no higher recommendation!

Visit Trondheim’s official site, in French, here and read, in English, his bio with lots of art here.

It’s the Smurfs, either you like them or you don’t. Personally, I really like them. This volume contains 3 stories which is just right for one sitting. My only complaint, I wish the book was a little bigger. Peyo is a fantastic cartoonist and his art, which looks good small, would look fantastic at full size.

Back in ’94- ’95 Kurt Busiek created the ‘real people in a superheroes world’ genre when he wrote Marvels and Astro City. Eager to copy the success of those books, DC published Chase ’98.  This is a collection of the cult series loved by critics and fans alike.

The collection is a bit of a mixed bag. Chase’s first appearance in Batman is included, which was a story by Doug Moench and Kelly Jones. What a waste of paper that was! After that, we get into the meat of the series collecting issues 1-9 and 1,000,000. After reading the first issue you immediately realize why this is so loved. Johnson and Williams script a tight story with all sorts of subplots and full of real character moments. It’s a ton of fun to read. Not every issue is perfect and some of the supporting cast members are clunky clichés but it has more ups than downs.  And, even the downs aren't that bad.  The remainder of the book is filler backups from various places.  The stories aren't necessarily bad but because they are backups they don't have the same feel as the regular series.  If you like Williams work on Batwoman then this isn't to be missed.  If you want to see what all the hype was about, it works out to $3 an issue for the really good stuff with lots of extras which isn't a bad deal either.