Not a heavy week, but not a thin one either. So lets take a look at some books, shall we? 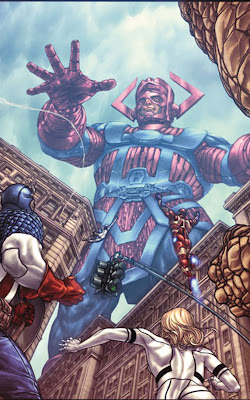 Fantastic Four #602- So Hickman’s Fantastic Four run has been based largely on the idea of disasters/threats all converging on the FF at the same time. This story seems to be bringing at least four to five different plots to the head at the same time. Stacking this many plots can be messy, and it is, but Hickman uses that to his advantage. By having the Kree, Inhumans, and Annihliation Wave all show up at once and start fighting each other feels overwhelming, but in a good way. So when Reed and Sue decide to call Galactus in, it actually feels like things are desperate enough to warrant it. And of course at the end, things get even more bonkers. Barry Kitson does a fantastic job here, giving the conflict between everyone involved a suitably epic feel, while never allowing the story telling to be confusing, which is quite an accomplishment in a book with this many different moving parts. 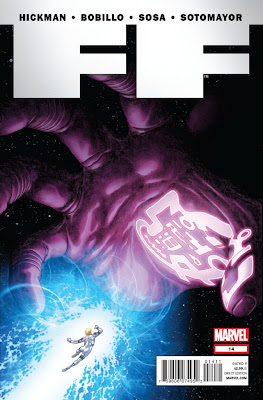 FF #14- A textbook example of how to do a supplemental book. The actions of all the kids at the Future Foundation work with Doom, Nathaniel Richards, and Evil Reed to delay the Celestials from entering the main conflict. It adds some background to what we’re reading in Fantastic Four, but is not required reading. Also nice to see She-Hulk’s Juan Bobillo back in mainstream comics. He’s well suited to the scifi elements of the book and does a good job of lightening the mood a bit. 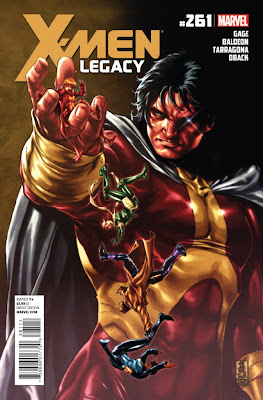 X-Men Legacy #261 - Still doesn’t do a great job defining what this book is specifically about, which it would seem to be Rogue and the faculty that Aaron isn’t writing about in Wolverine and the X-Men, but not bad for what it is. Exodus, the 1990’s most forgettable X-villain returns, convinced that he needs to save mutant kind by keeping them united. After a long fight, they manage to convince him they had the right idea of leaving Utopia, at which point Exodus acknowledges they’re right and goes to destroy Utopia instead. Its a good superhero story, but also a kind of hilarious take on the problems that these artificial splits between superheroes have on secondary characters. 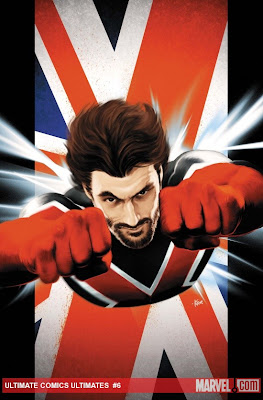 Ultimates #6 - Again, Hickman stacks crises here as he does in Fantastic Four, and it works well here as well. While it could feel a bit more repetitive, the threats here are decidedly less cosmic, with Reed Richards’ future people setting up shop in Europe, a cabal of insanely rich people deciding to seize control of the world, and Captain America refusing to help out. What really makes this work is that the Ultimate universe has always felt a bit more dangerous than the regular Marvel U, and Hickman has done a good job creating the sense that when one too many things goes wrong, it all spirals out of control. 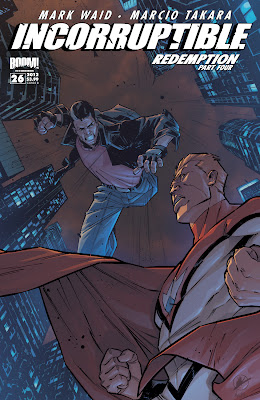 Incorruptible #26 - We get more of Max Damage’s origin story here. Its fascinating to see how Waid is taking what could be such a bad idea (tying Max’s origin to the Plutonians) and making it work so well. Having Max drive the Plutonian insane, by reminding him of the time he actually lost control, all without realizing it. I think Irredeemable gets a bad rap from some fans because they thought the whole thing would be a mystery, but I think Max is a fascinating (and less repugnant) character and that makes Incorruptible a more interesting title to read.
Posted by Greg at Thursday, January 26, 2012