Indies Previews For March Part 3 of 3 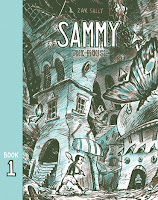 La Mano
Sammy the Mouse Vol. 01 SC by (W/A/C) Zak Sally
Collecting the first 3 issues of the Eisner-nominated cartoonist Zak Sally's acclaimed Ignatz series (originally released through Fantagraphics Books), this low-priced volume presents the new, ongoing format for the story. In addition, Zak Sally himself printed the books on his own offset press, giving this volume a uniquely handsome quality. 104 pgs Zak posted a video explaining what he is up to here. $14.00
Lee: And today we start with the "it's just weird" book of the month. This was originally part of Fantagraphics Ignatz line and since moved to being self published so it has to be good right. As far as I can tell it's about a mouse who drinks to much, sees people and things while drunk, and complains about the pathetic wretched state of his life. Honestly, drunken sots getting into bizarro adventures does sound pretty good.
Gwen: Wow, Lee's description was much better than the solicitation - I think I want to read this now.

Some more ordinary books below the break.

Rebellion / 2000AD
Kingdom: Call of the Wild SC by (w) Dan Abnett (a/c) Richard Elson
Earth, the far-future. With the planet now overrun by gigantic alien insects, mankind is all but extinct. Genetically engineered dog soldier, Gene the Hackman, now protects one of the last remaining human beings, a young girl named Leezee Sower, and the two of them have traveled to the land of Auxtralia, straight into the territory of a new pack! $24.99
Lee: Ever since Kirby’s Kamandi, I’ve had a weakness for talking animals in a destroyed future. This looks like more of the same so if you like the genre then you need to read this.
Gwen: That's a very odd weakness Lee. But it's good to know that in order to defeat you I need only send a talking animal from a destroyed future your way. Perhaps a sloth.

Slaine: Books of Invasions Vol. 01 SC (S/S edition) by (w) Pat Mills (a/c) Clint Langley
The Sea Devils have risen against Tir Nan Og, the Land of the Young, and Slaine, once the first High King of Ireland, must protect his tribe against this new tide of evil. $19.99
Lee: It’s Slaine! What’s not to like? If you’ve ever wondered what a more violent Conan would be like then look no further than Slaine. Mills always creates an over the top, super macho, testosterone filled adventure full of hacking and slashing when he writes Slaine. It’s awesome!
Gwen: Wait, why would anyone ever look for a more violent Conan? Is punching a camel in the face and throwing a woman you've just slept with into a fire not violent enough for you??

Red Giant Entertainment
Medusa's Daughter HC by (w) Jonathan Scott Fuqua (a/c) Steven Parke
Fifteen-year-old Maia is gifted with magical hair. With a mysterious past, she is the adopted daughter of sideshow huckster Riktus who displays her in his freakshow as Medusa's daughter. Her journey to discover her past sets in motion the cascading events that lead to her growth and her freedom. $24.95
Lee: I haven't had to complain about a lack of previews in a long time but I need to here. This sounds really interesting and has the potential to be really good... but I can find NOTHING about it on the web. I did figure this much out, Parke is a photographer who took photo's and combined them to make this book. That sounds really cool but I want a page or two or three so I have some idea of what I might be getting into. Finally, Parke is from the Baltimore area which... since most of us here are from Baltimore makes the book just a shade cooler.
Gwen: I agree, it looks interesting but I'd rather see a bit more before adding to my loooong list of stuff I want to read. 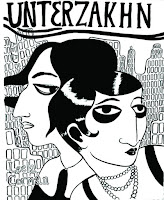 Schocken Books
Unterzakhn GN by (W/A/C) Leela Corman
A mesmerizing, heartbreaking graphic novel of immigrant life on New York's Lower East Side at the turn of the 20th-century, as seen through the eyes of twin sisters whose lives take radically and tragically different paths. In drawings that capture both the tumult and the telling details of that life, Unterzakhn (Yiddish for Underthings) tells the story of sisters Esther and Fanya: as wide-eyed little girls absorbing the sights and sounds of a neighborhood of struggling immigrants; as teenagers taking their own tentative steps into the wider world; and, finally, as adults battling for their own piece of the golden land, where the difference between just barely surviving and triumphantly succeeding involves, for each of them, painful decisions that will have unavoidably tragic repercussions. $24.95 Read it online here.
Lee: This reminds me a lot of Persipolis by Marjane Satrapi. The stories of people growing up in difficult times is always interesting and this looks to be one of the better ones. It’s worth checking out.
Gwen: Okay, this looks very interesting story-wise, but to be honest the art really isn't my style and turns me off of the book a bit. 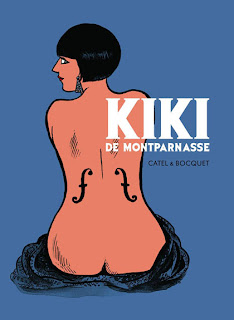 Selfmadehero
Kiki De Montparnasse GN by (w) Jose-Luis Bocquet (a/c) Catel Muller
In bohemian Montparnasse of the 1920s, Kiki escaped poverty to become one of the most charismatic figures of the avant garde years between the wars. Partner to Man Ray, and one of the first emancipated women of the 20th century, Kiki made her mark with her freedom of style, word, and thought that could be learned from only one school - the school of life. 416 pgs. $24.95 A site showing many of the works of art the Kiki inspired, and created, is here. Also, the TCJ review here, and if they like it (they do) then you know it has to be good because they don’t anything.
Lee: My local comic shop tells me all the time that I don’t know how lucky I am to have the diversity of books that exists these days. I always doubt him until I see a release like this. I was woefully ignorant of Kiki and her influence on art, and Man Ray. This is one bio that I cannot miss.
Gwen: Really? We do indie solicitation reviews every month and you don't see how much great comic diversity is available now days? Either way, this is a pass for me for the moment. It looks interesting but there's nothing that's jumping out to make me want to buy it at the moment. 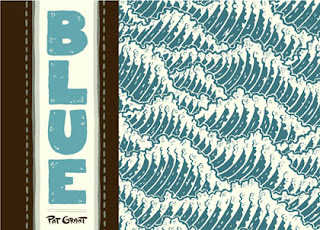 Top Shelf Productions
Blue HC by (W/A/C) Pat Grant
Blue is the debut graphic novel of Australian cartoonist Pat Grant. Part autobiography and part science fiction, Blue is the story of three spotty teenagers who skip school to go surfing only to end up investigating rumors of a dead body in their beach town. Habibi's Craig Thompson said this about Blue: This book rekindles my earliest enthusiasm for the comics medium. Pat Grant is the Australian Mark Twain, trading Huck's raft for a waxed-up surfboard and an inked-up sable brush. Vast themes of racism and immigration unravel in sprawling murals and a single day in the life of some reckless teens in this sea-polished, perfect nugget of a book. $14.95 Visit the site and read a bit of the story here.
Lee: Top Shelf publishes many a great book so I'm sure this will be good. The art is somewhat cartoony which seems to be at odds with the subject matter. But, it's worth investigating because I think it will be good.
Gwen: I like the concept and I'm usually easy to sucker in with a good murder mystery. 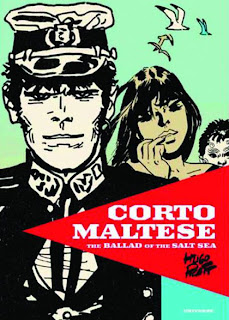 Universe
Corto Maltese Vol. 01: Ballad of the Salt Sea SC by (W/A/C) Hugo Pratt
Treasure hunter, sailor, and adventurer, Corto Maltese remains one of the most popular characters from graphic literature in Europe and maintains a devoted cult following among American readers and creators. Originally published in 1967, Corto Maltese: The Ballad of the Salt Sea introduces our hero for the first time. The story begins with Corto Maltese adrift at sea in the Pacific during World War I. He is picked up by a Russian pirate/privateer named Rasputin. The graphic novel follows Corto and the adventure that ensues. $25.00 A bio of Pratt here and his official site here.
Lee: Pratt is one of the greatest comic creators ever. That’s right, E-V-E-R, having won a stack of awards at Angoulême and easily equivalent to Stan or Jack in terms of inspiration to a generation of creators, I for one am not going to miss this chance to read his material. Incredible art and surreal stories await me.
Gwen: This does look like an excellent collection, definitely worth checking out.

Lee: Another month ended. As I said there were a whole bunch of great selections this month. I am so excited about Pratt's Corto Maltese that I can't say enough good things about it.
Gwen: I'm just entertained by Lee's weakness for post-apocalyptic talking animals.