And now we reach the last of this back of library books that I kind of liked. The last two, to be seen in coming weeks, were just misery.

Anyway, to the story at hand. Dong Xoai (and don't ask me how to pronounce it) was written by the great Joe Kubert (I should probably make that a capital G, seeing as that's just about his official title now). It's based on the actual mission of Detachment A-342, 5th Special Forces Group (Airborne) in 1964-65. It traces a couple of missions in Vietnam just as the war was starting to become wider in scope but still during the time when the mission was to work with local and indigenous fighters who opposed North Vietnam and the Viet Cong. Training for guerilla war as well as manning positions to thwart the Viet Cong's own guerilla war tactics.

It's less a comic book presentation than it is an illustrted story. Captions and dialog occupy one space and pictures another. It's also less a story than a documentary. It's not identical to the actual actions A-342 encountered but it's pretty damn close.

It doesn't work very well as a story, though. It's too impersonal. I love history and wa 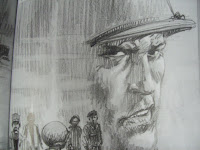 rs are almost always fascinating because of the extremis the participants are facing. But there's no development of the people in this story. It's dry, like the military reports that form its basis. When members of A-342 are wounded or killed, I don't know who they are. I have some sympathy for them as Americans but they're hardly more developed as people than the Viet Cong and North Vietnamese (NVA) they're facing (who aren't developed at all).

On top of that, there's nothing in this story I haven't seen before. A small group of me 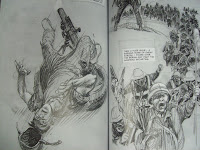 n goes into a foreign land to train locals to fight an enemy. Nothing much happens there, actually, which is kind of different, but later, and for most of the story, they're stationed in another area at an outpost with South Vietnamese troops (ARVN) and local militia. They're heavily outnumbered when attacked by NVA and Viet Cong. The locals and ARVN troops flee at a certain point in the battle, leaving the Americans to fight on alone. Eventually the survivors are rescued by helicopter.

The main appeal to the book is Kubert's art. That is its usual fantastic. All pencil work with no colors, it's what I expect from the man who made Sgt Rock come to life, particularly in a book 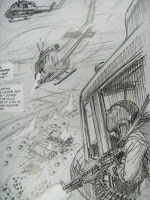 about a war. In fact, viewed as an art book it's a great work. Not reading the story is probably an improvement.

For the historical completists, there's a lengthy section at the back put together by the members of A-342, including maps and photos. The photos include pictures taken in 1964-65 and more recently when the surviving members are old men. Kubert also has end notes documenting other sources. Truth be told, aside from the great art, the book could be very useful for someone doing research into the period, including for school projects. It would be a very good way to introduce someone to the early Vietnam War period and serve as a springboard for further research. However, as reading for both knowledge and entertainment, it could have used more personal touches about the men involved.
Posted by Thomm at Sunday, January 29, 2012